Boys in Blue’s preseason concludes with a split result 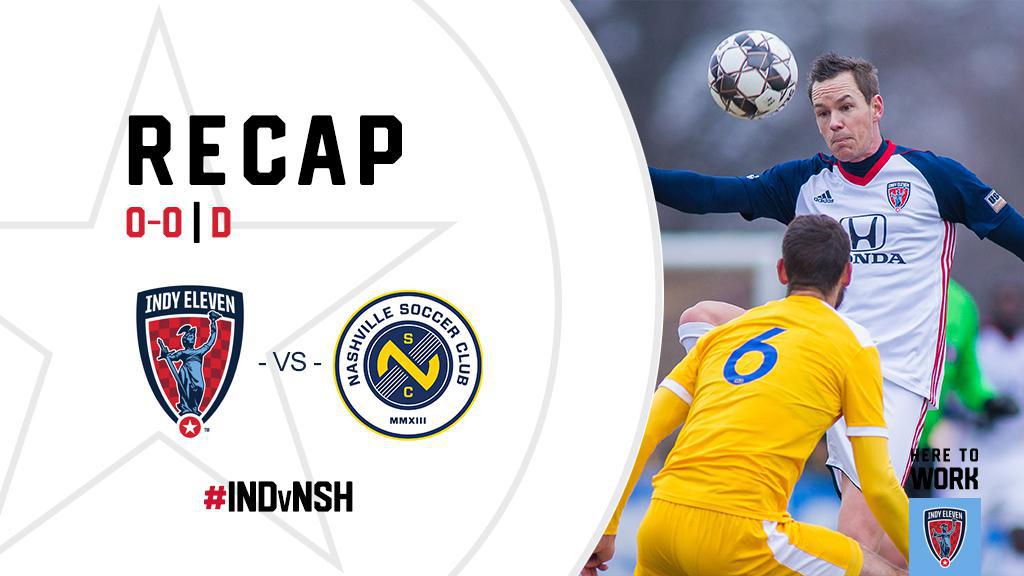 Indy Eleven’s preseason series comes to a close following a nil-nil draw to USL Championship Eastern Conference rivals Nashville SC. Saturday’s result sees Indy with a 1W-2D-2L overall record through the preseason before heading into the regular season with a clean slate.

“I thought today was a good performance against one of the stronger teams in our league,” said Indy Eleven Head Coach Martin Rennie. “We were trying to get guys through the full 90 minutes, just like we would in a proper game…But we defended well and handled the game well. I’m happy with that. Just looking forward to the season now.”

Indy Eleven goalkeeper Evan Newton was forced to make an early save four minutes into the match. Boys in Blue midfielder Tyler Gibson was quick to return the favor two minutes later with a header on frame off a corner kick, but the nodded hit was caught by Nashville goalkeeper Connor Sparrow.

Much of the first half was played in the midfield as both sides battled for attacking opportunities. Nashville had numerous free kicks from long distance that failed to materialize into dangerous plays. Indy Eleven midfielder Tyler Pasher had two shots in the 23rd and 28th minutes that were deemed offside and ended over the crossbar, respectively.

Boys in Blue forward Ilija Ilic came close to finding the afternoon’s opening goal in the 44th minute after a play into Nashville’s box from forward Josh Penn, but his headed effort was blocked by defender Liam Doyle before crossing the goal line.

Indy continued its offensive push with a trio of on-target shots, all of which were saved by Nashville’s keepers. Half-time substitute forward Thomas Enevoldsen played a cheeky backheel pass through to defender Karl Ouimette deep into Nashville’s 18-yard box for a near-post shot in the 56th minute. Penn followed up with a shot nearly 10 yards out toward the lower left corner of the goal two minutes later.

Forward Dane Kelly forced a lateral-dive save from Nashville goalie Matt Pickens in the 68th minute, seven minutes after the keeper subbed in, with a heavy hit near the top of the penalty box.

The Music City side asked the final question in the 84th minute with a shot within Indy’s 18-yard box. Newton stood his ground and firmly contained the ball, keeping it a comfortable distance from goal.

Coach Rennie will seek continued improvement from his squad as his sights turn to the team’s first fixture of the regular season a week from today against Eastern Conference newcomers Saint Louis FC.

“The whole preseason, even in the beginning before preseason started, was about getting fit; about learning what we want to do and improving our play,” Rennie said. “We’ve done that well. Obviously, things count now that points are at stake every game. We need to really keep working on the way that we play. We need to keep improving and get ready for what will be a big game next week.”