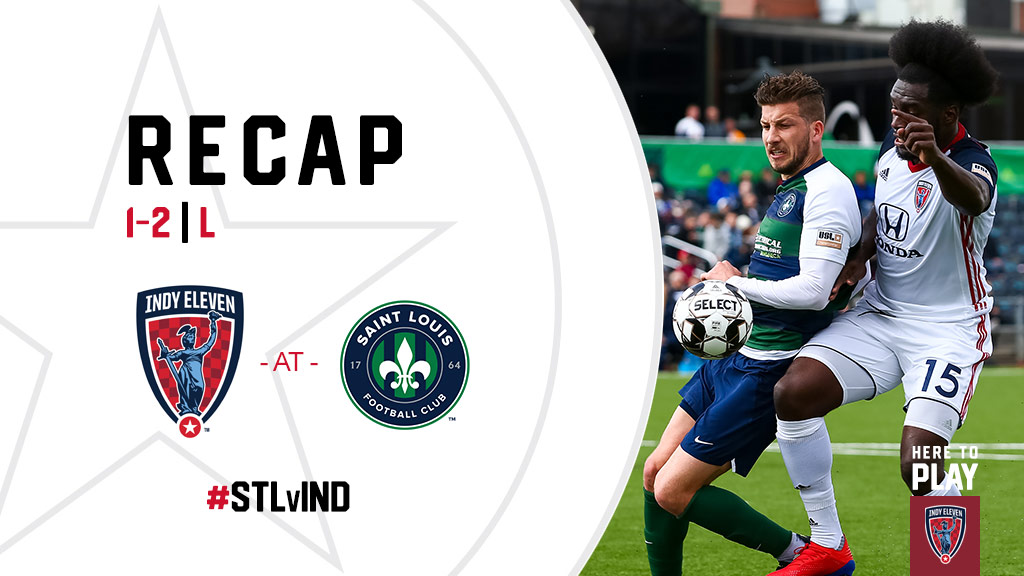 Indy Eleven fall in the club’s 2019 USL Championship season opener on the road against Saint Louis FC, 2-1. A lone goal from defender Neveal Hackshaw wasn’t enough to fend off back-to-back strikes late in the match.

“It’s one of those games where we actually played quite well for most of the game,” said Indy Eleven Head Coach Martin Rennie. “We took the lead, but I think once we took the lead, we didn’t manage the game as well as we should have. We were a little bit too open, we gave away too many free kicks, we didn’t’ keep possession of the ball well at that point…it was really a five-ten minute spell from when we scored that we just kind of lost focus and that’s something we have to improve immediately.”

Saint Louis came out of the gate strong in the opening moments of the match. Saint Louis midfielder Lewis Hilton’s corner kick in the second minute found the head of captain Sam Fink inside Indy’s penalty box near the far post. The ball was ultimately kept from crossing the goal line by last-second heroics from Indy forward Dane Kelly. Hilton followed up with a secondary attack three minutes later with a strike near the top of the box, which fell straight into Eleven goalkeeper Evan Newton’s gloves for an effortless save.

Eleven returned fire in the seventh minute as a set-piece play created a chance for Hackshaw, but the new in Blue’s header fell to the right of the goal. Eighteen-year-old midfielder Josh Penn found the next chance in the 19th minute with a tight shot after charging in from the left edge of Saint Louis’ 18-yard box, which was saved in the corner by Saints keeper Jake Fenlason. A final look at goal in the first half came Kelly, but was blocked, keeping the match scoreless heading into halftime.

Indiana’s Team’s backline, comprised of defenders Paddy Barrett, Karl Ouimette and Hackshaw, worked in unison to keep Saint Louis’ chances in the first half at a minimum. At the final whistle, the trio accounted for a combined 12 clearances, eight interceptions and three tackles.

Indy entered the second half with high intensity, finding the first shot two minutes after the restart. Kelly smashed the left post with a header after Penn initiated the play with a cross from the left flank. Another strong opportunity was handed to Indy in the 60th minute when the Boys in Blue were awarded a penalty after Kelly was brought down in Saint Louis’ box. Kelly stepped up to the spot and struck the ball towards the left post, but was saved at extension by Fenlason. The resulting corner kick a minute later was fruitful for Indy, as midfielder Kenney Walker found Hackshaw at the far edge of the six-yard box for a headed goal, opening the defender’s scoring account.

Indy’s lead was cut short as Saint Louis found the equalizer in the 69th minute. A scramble in the center of Indy’s box led to STL defender Phanuel Kavita finding the unassisted goal. A level score line turned into Saint Louis’ lead seven minutes later when another scrum of players fought for the ball near the top of Indy’s six-yard box. Midfielder Russell Cicerone took his shot, finding the back of the net amongst the chaos. Kelly and substitute forward Eugene Starikov tried to rebound to re-level the score, but the final whistle blew before Indy had the could do so.

The Boys in Blue will have less than a week to regroup before hitting the road again to take on Charlotte Independence. Despite the quick turnaround, Coach Rennie looks to correct mistakes on the road early in the season.

“We have a lot of away games in the beginning of the season this year, so we’re going to have to have plenty of practice playing on the road,” Rennie said. “If we play like that and we manage the game better, I’m sure we’re going to do well in those games. We have to put this one behind us and look forward to the next one.”

Indy Eleven returns to regular-season action next Friday, March 15, as the Boys in Blue hit the road to Charlotte Independence. Fans can catch all the action this season on ESPN+. New users can start their seven-day free trial by visiting plus.espn.com.