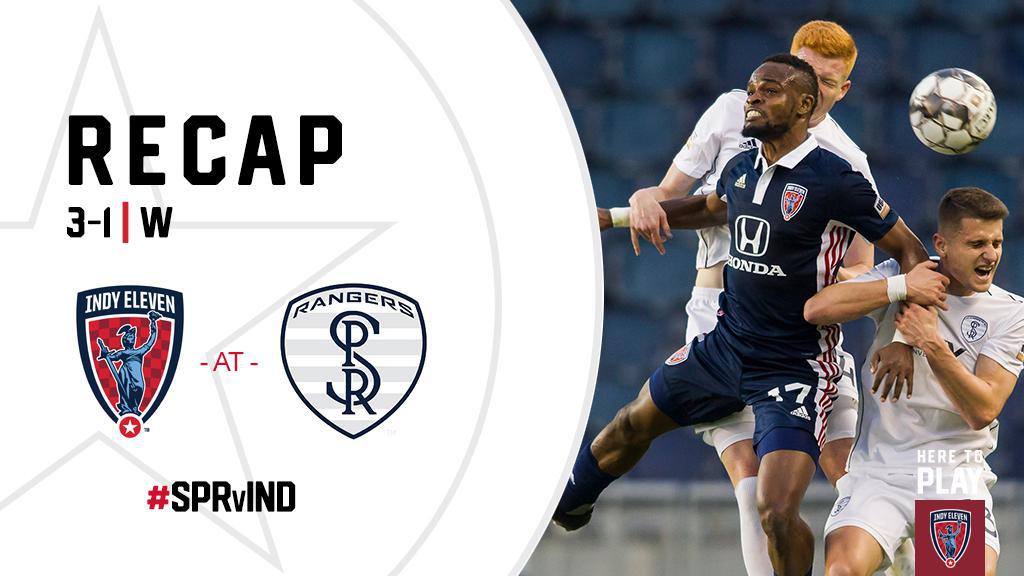 Indy Eleven (3W-1L-0D) returned to USL Championship play in spectacular fashion after a 15-day break with a 3-1 win on the road against Swope Park Rangers (0W-3L-1D). A brace and an assist from Eleven forward Dane Kelly helped extend the winning streak for Indiana’s Team to three games, resulting in nine points from the team’s first four fixtures of 2019.

“Overall, I think it was a very good team performance and a really good night for us,” said Indy Eleven Head Coach Martin Rennie. “It is really hard for us to go to a team like Swope Park Rangers, who have had a lot of success in the USL [Championship], and have a game like that.”

It took only 67 seconds for Indy Eleven to climb on top, Kelly taking advantage of a failed back pass by Swope Park defender Camden Riley to give the visitors a lightning fast lead. Kelly swooped in and rounded Rangers (and ex-Butler Bulldog) goalkeeper Eric Dick with his first touch and with his second rolled home from a tough angle, the Jamaican opening his account with equal hustle and ease.

The Boys in Blue doubled their lead not five minutes later, left back Ayoze creating the opportunity with a 30-yard run into the final third and a perfectly-weighted chip to Kelly, who deftly one-touched into the path of Thomas Enevoldsen. Dick got a hand on the Danish striker’s low shot, but not enough of one to keep it from crossing the goal line, the 2-0 Indy advantage within seven minutes quickly putting the home side on its heels. Kelly nearly had a quick brace 11 minutes in, but his chance from 15 yards was sent right to the Rangers ‘keeper.

The one-way traffic by Indy would even out around the quarter-hour mark, and Swope Park would earn their first quality chance in the 23rd minute on a set-piece just outside the Eleven area – one that was easily corralled by Eleven goalkeeper Evan Newton.

Rangers would get one back in the 26th minute with midfielder Alexsander doing the heavy lifting, his 50-yard run straight up the center of the field ending with a ball that put Wilson Harris behind the Indy back line. One-on-one with Newton, Harris slotted home from left of goal to cut the Indy advantage in half, and it could have been evened up in the 29th minute had Macauley “Macca” King not have swooped across the penalty area to knock away a squared ball headed towards Felipe Hernandez.

“We were a little bit late on our pressure a couple of times and they opened up,” Rennie said. “We could’ve reacted a little bit better once that happened, but it was really about one of the only shots they had on goal. Overall, we can’t be too disappointed in that, but there were a couple of things we can learn from.”

Indy Eleven would take the momentum back at the half hour, Ayoze again creating havoc in the 31st minute with a ball to the six that Kelly had poked away before he could redirect. Seconds later, Indy midfielder Tyler Pasher lashed a shot inside the area that forced Dick into a save. Swope Park would see the last dangerous chance of the opening half in the 36th minute, but Newton made his finest save of the evening by punching away the in-swinger that found its way to the Indy netminder through traffic.

The second half came to life in the 51st minute with Riley trying to atone for his early mistake with a shot from distance that missed a couple of feet past the right post. Two minutes later it was Ayoze helping to put Indy Eleven on the board once again, the Spanish maestro springing a 70-yard ball over the top that put Enevoldsen free on the left end line. The Dane’s cross to the penalty spot was deflected but still found Kelly, who turned and fired home a left-footed rocket to again give Indy a two-goal cushion.

“It helps a lot with Dane’s confidence, especially having two goals and an assist on Thomas’ goal,” Rennie commented. “Thomas also scored, so two attackers got three goals between them. It definitely builds confidence and that’s really important for a striker. It nice to see them rewarded for the hard work they’re putting in.”

In the 61st minute, Eleven defender Alex Crognale nearly increased the lead with a strong header off a corner, but Dick made a one-handed save, pushing the ball over the bar from point-blank range. The rest of the half saw Indy largely content to drop numbers and keep Swope Park at bay – which largely worked other than shots from distance that Newton had covered regardless. Kelly would have a few chances to finish off his hat trick on counter attacks, most notably in the 85th minute when Dick thwarted the USL Championship’s all-time goal king with a kick save after cutting off the angle.

Indy Eleven’s April away swing continues this Saturday, April 20, when the Boys in Blue travel to the Philly area to take on Bethlehem Steel FC. The matinee kickoff from Talen Energy Stadium – the home of MLS side Philadelphia Union – in Chester, Penn., is set for 4:00 p.m., and the match can be seen exclusively via streaming video on ESPN+.