Boys in Blue, Steel FC to face off in second Week 7 matchup 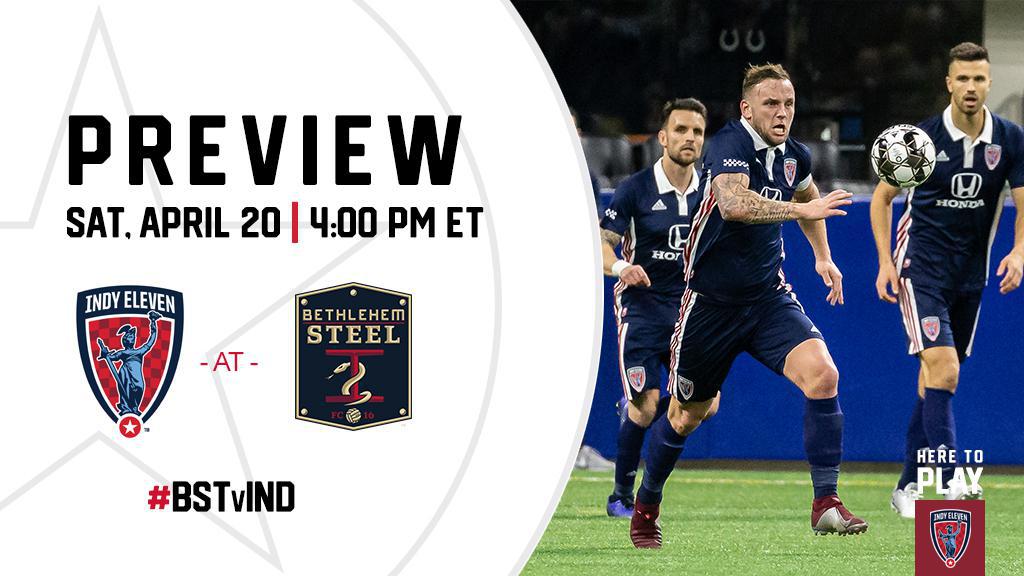 Indy Eleven (3W-1L-0D, 9 pts.) extended its winning streak to three after defeating Swope Park Rangers 3-1 in the first Week 7 matchup on Monday. Forward Dane Kelly had the break out game he’s been striving towards, having his hand (errrrr, feet) in all three goals the last time out, netting twice and assisting on the other for strike partner Thomas Enevoldsen. Kelly’s two goals see him knotted atop the Eleven scoring chart alongside Enevoldsen, and brought his league-career-leading total to 69. The three tallies on the evening brought Indy’s aggregate goals scored to eight in 2019, while the three points earned has the Indiana’s Team resting at a deceptive seventh place in the Eastern Conference table, sitting just three points off the pace of the second-place Tampa Bay Rowdies (12 pts.).

Bethlehem Steel FC (3W-3L-1D) looks to return to winning ways after a 1-2 defeat at the hands of Charlotte Independence in their first of two Week 7 matchups on Tuesday, an 80th minute goal from midfielder Chavany Willis not doing enough to plug the holes in the sinking Steel ship. The fixture was the third time in 2019 that the second-highest scoring team in the Eastern Conference was held to one goal or less in its seven games, showing that, when Bethlehem scores it does so in lumps. Meanwhile, the two goals conceded brings the team’s total to 10 goals allowed thus far in 2019. Leading goal scorer Kacper Przybylko (3 goals) did not appear for Bethlehem on Tuesday, but the team’s second highest scorer, Faris Pemi Moumbagna (2 goals), played the full 90 minutes without impacting the game. The loss sees Bethlehem one point ahead of Indy, sitting in fifth place with 10 points.

Previous meetings between the sides indicate the matchup should be tightly contested, as the 2018 three-game series resulted in a win for each team followed by a draw in the final meeting.

In basketball, there’s the hot hand. In soccer, there’s the hot foot? Maybe? Either way, Indy Eleven forward Dane Kelly is certainly heating up after netting twice in the previous match against Swope Park Rangers and creating a goal for Thomas “The Engine” Enevoldsen. The brace is the first pair of goals of 2019 for the 28-year-old after fighting through a difficult start to the season, which included hitting the post four times in his first three appearances.

Despite the rough start, the look of relief after the Jamaican striker’s somewhat lucky and skillful first goal and the smirk of confidence after the stunning strike for the second indicate the 2017 USL Most Valuable Player has his swagger back. Cut the guy a little slack for not starting out hot - he went from 27 appearances and 18 goals in 2017 with the Western Conference’s Reno 1868 to one appearance and no goals with Major League Soccer’s D.C. United in 2018 before being loaned to now-USL League One Richmond Kickers, where he made four appearances and scored once. But the form displayed against Swope Park is what Kelly in his prime looks like, a form that the Eleven faithful - and coach Martin Rennie - hope to rely on.

One man has played every minute of every match in 2019 for Bethlehem Steel FC. A veteran of course, right? Wrong. Eighteen-year-old Ben Ofeimu, a Steel FC central defender, leads the team in minutes played and most defensive categories, as well. The Philadelphia Union youth product is in his first year on a professional contract, which he signed just four months ago.

The rookie has been worth the money, too. The Michigan native leads the backline in clearances, blocks and interceptions, and has only lost one tackle so far in seven games. The lengthy 6-foot-3-inch defender uses his height to his advantage as well, as he’s won exactly half of his aerial challenges. If that wasn’t enough, he’s both scored and assisted this season, too.

Time to crunch some numbers. Statistically, Indy Eleven are going head-to-head against the strongest offense in the Eastern Conference. Steel have taken 57 shots, put 26 on target and converted 12 into goals. Having nearly one out of every two of shots on target go in can’t be the most frustrating aspect of the game for Bethlehem Head Coach Brendan Burke. Bethlehem’s offense also plays unselfish soccer, as the side has assisted on seven goals in 2019. Forwards Kacper Przybylko and Faris Pemi Moumbagna will most likely lead the charge up front, as the two are the leading goal scorers on the team with three and two goals respectively.

Indy Eleven’s backline, tasked with keeping the two forwards at bay, has conceded five goals in four matches during the 2019 season. The back third has helped ‘keeper Evan Newton keep one clean sheet while technically running a three-back system (although the wingers certainly pitch in on that side of the ball). Indy has enforced a high press to try and keep opponents in check when on the ball and created turnovers in the opposition’s half. It’s hard to give up chances on goal when the other team struggles to keep consistent possession and string passes together in your final third. Neveal Hackshaw, Paddy Barret, Karl Ouimette and Alex Crognale have been the consistent faces featured in Coach Rennie’s back line and can be expected to martial the back third of the pitch come Saturday’s matinee fixture on the banks of the Delaware River.

Just because you're not traveling with the team doesn't mean you should miss any of the action! All USL Championship 2019 regular season matches are available at your fingertips on ESPN+. New users can click here to start a free seven-day free trial.