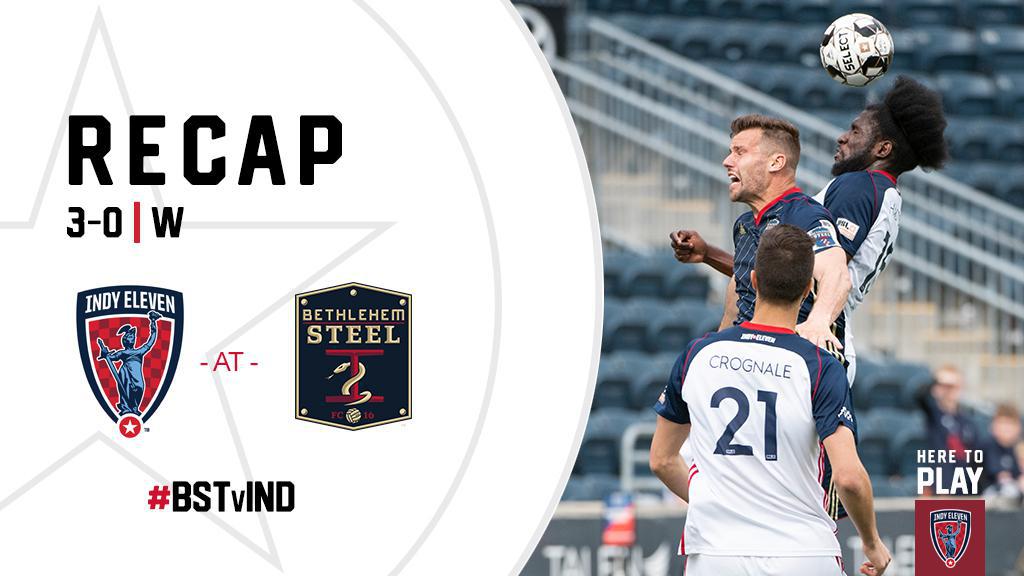 “I think Bethlehem are very strong on their counterattacks and transition,” said Martin Rennie, head coach of Indy Eleven. “They leave a lot of players in dangerous positions, so when we have the ball, we have to be careful not to lose it in bad areas and not overcommit. I think we did that really well and that resulted in us managing to keep the clean sheet.”

After starting the week by scoring the quickest goal in Indy Eleven’s history, Kelly looked to set another speedy goal record 45 seconds after the starting whistle, thanks to setup play by Pasher. However, the forward’s right-footed shot sailed just over Steel ‘keeper Carlos Coronel’s fingertips and nestled atop the net. Kelly led another charge through the top of Bethlehem’s box nine minutes later, but a foul called just after he crossed the 18-yard marker ended his threatening run.

A high-pressing Steel offense tried to catch Indy off guard in the 12th minute, forward Saed Diaz splitting between defenders Paddy Barret and Alex Crognale to bring down a cross for a shot. Eleven goalkeeper Evan Newton darted off his line and slid low to catch the ball as it fell into Indy’s penalty area, effectively ending Diaz’s attacking run.

A lull in action as both sides battled for possession came to an end in the 26th minute when Hackshaw put Indy on the scoreboard. Defender Ayoze Garcia initiated the chain reaction that led to the goal, his in-swinging cross from the corner finding the forehead of Alex Crognale inside the opposition’s box. Crognale’s header bounced off the ground and connected with Barrett’s head to set up Hackshaw for a somewhat Zlatan Ibrahimovic-esque roundhouse kick into the net.

With confidence soaring, it only took Indy 99 seconds to double the lead, thanks to a stunning strike by Kelly. A chain of four, squeaky clean passes ended with Eleven playmaker Ayoze cutting a diagonal through ball to Kelly as he dashed towards Steel’s frame. The 28-year-old hammered a one-timer to the right of Coronel for his 70th Championship career goal.

“The second goal in particular was a really well-crafted goal,” Rennie said. “I think those kinds of goals give you confidence, especially since we scored the second goal right after scoring the first goal. That was probably a pivotal moment in the game.”

Steel FC looked to close the gap on Indy’s lead in the 32nd minute, with linking play between James Chambers, Diaz and eventually a center-bound effort by Zach Zandi from close range. Though Newton had eyes on the driven low shot, it was Hackshaw’s foot that halted the home side’s scoring opportunity, deflecting the ball out for a corner kick. Steel had the final first-half attempt at scoring eight minutes later with another shot by Diaz near the right edge of Indy’s box, lofting far over Newton’s crossbar.

Steel FC returned in the second half with a strong sense of scoring urgency, having the first look at goal in the 56th minute. A defensive header from Crognale sent Steel’s incoming cross back up the pitch, landing at the feet of midfielder Derrick Jones before being laid off to Michee Ngalina for a shot, ending just wide of the goal. Regardless, 2018 USL Championship Golden Glove winner Newton did well to track the ball to the far post in the event the shot remained on target. Ngalina retaliated with another low shot from a tight angle six minutes later, but Newton was well prepared as he came down on top of the ball.

Second half Eleven substitute and captain Matt Watson crafted an opportunity in the 69th minute shortly after entering the match, sending a speedy pass near the byline back to Pasher at the top of Steel’s box. The Canadian struck hard on his second touch, forcing Coronel on his toes to palm the ball over the goal.

It wasn’t long before Pasher squared off with Coronel again, this time resulting in the third and final goal of the game. Eleven midfielder Nico Matern played a driven pass through a highly pressed and stretched out Steel defense, with enough space for Pasher to continue a pacey dribble into the final third. Coronel came far off his line in a last-ditch effort to stop the charge, but the ‘keeper was no match one-on-one with Pasher as he danced around the netminder for a shot on the open goal, sealing the win for the Boys in Blue.

“When your strikers are playing with confidence, then generally they are scoring goals and looking dangerous,” said Rennie. “I thought we did that today, not only on the three goals, but we also had other chances that looked dangerous as well. Overall, it was a very strong performance.”

Indy Eleven’s April on the road comes to an end next Sunday, April 28, when the Boys in Blue travel to the Big Apple to take on New York Red Bulls II. The Boys in Blue will take the stage at MSU Soccer Park for a 5:00 p.m. ET kickoff and the match can be seen exclusively via streaming video on ESPN+.