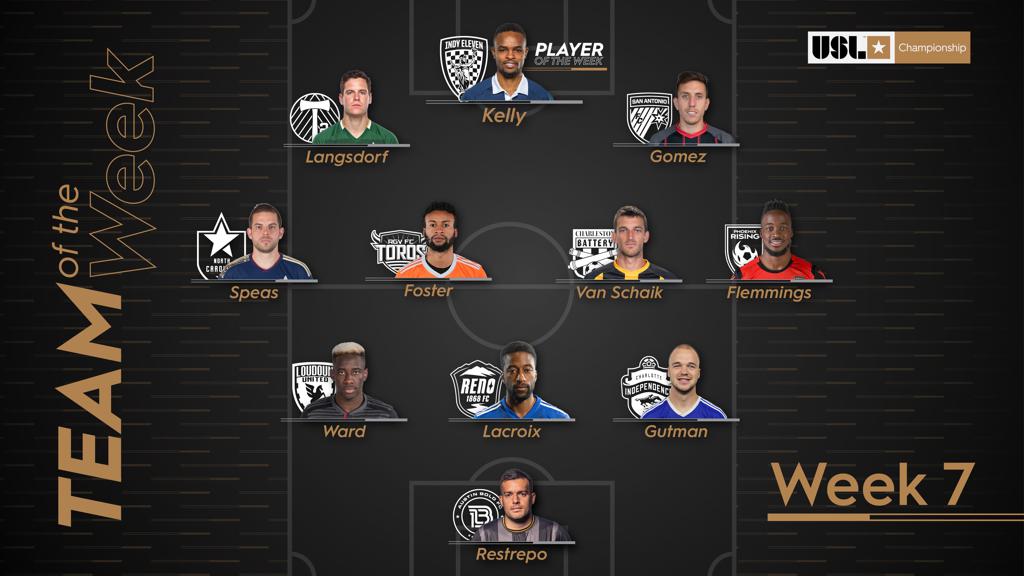 Indy Eleven forward Dane Kelly has been voted the USL Championship Player of the Week for Week 7 of the 2019 season. Kelly opened his account for the Boys in Blue in grand fashion with three goals and one assist across a pair of road victories against Swope Park Rangers (3-1) and Bethlehem Steel FC (3-0) to help Indy push its winning streak to four games, the best start to a season the Eleven has seen in its six-season history. The 28-year-old continues to lead the Championship all-time scoring charts with 70 career goals to his name.

Eleven midfielder Tyler Pasher also earned a nod on the Team of the Week list alongside Kelly, earning an honorable mention tab on the Week 7 chart’s seven-man bench.

Kelly snapped a frustrating start to his season – included four hit posts in his first three games – last Monday by factoring into all three goals against Swope Park, notching an assist on Thomas Enevoldsen’s 6th minute goal in between scoring the fastest goal in Indy Eleven history (67 seconds) and a 56th minute insurance tally. Kelly would pass Enevoldsen for the team’s scoring lead on Saturday at Bethlehem Steel FC, scoring his third of the season in the 28th minute to put the Boys in Blue up two early in the eventual 3-0 victory.

Kelly earned a slew of accolades at the conclusion of the 2017 season, including being named USL Championship’s Most Valuable Player and was named to the All-League First Team. Additionally, Kelly claimed the 2017 USL Championship Golden Boot after recording 18 regular season goals. The Saint Catherine Parish, Jamaica native made his MLS debut for DC United in early 2018. Outside of regular season action, Kelly started at home in United’s fourth round US Open Cup 1-1 draw (4-3 on penalty kicks) against USL Championship’s North Carolina FC.

Indy Eleven’s April on the road comes to an end next Sunday, April 28, when the Boys in Blue travel to the shadows of the Big Apple to take on New York Red Bulls II. Indy Eleven’s visit to MSU Soccer Park in Montclair, N.J., is set for a 5:00 p.m. ET kickoff for a match can be seen exclusively via streaming video on ESPN+ (sign-up for a free 7-day trial here).

Indy Eleven returns to Lucas Oil Stadium to take on Tampa Bay Rowdies on Wednesday, May 1, at 7:00 p.m., followed by a second home match three days later against North Carolina FC at 7:00 p.m. Tickets are available for as low as $15 at IndyEleven.com/Tickets or by calling 317-685-1100.

D – Akeem Ward, Loudoun United FC: Ward put in a stellar display on the right side of Loudoun’s defense, recording an assist and two key passes while winning 6 of 8 duels, making four interceptions and seven recoveries.

D – Andrew Gutman, Charlotte Independence: Gutman scored in the Independence’s first win of the season against Bethlehem Steel FC, and for the week had four key passes, 22 recoveries and completed 77 of 97 passes.

M – Maalique Foster, Rio Grande Valley FC: Foster had a goal and assist to lead to the Toros to a 5-2 victory against Las Vegas Lights FC.

M – Jarad van Schaik, Charleston Battery: Van Schaik scored a pair of outstanding goals, won 8 of 14 duels and made four recoveries as the Battery powered past Nashville SC in a 3-1 victory.

M – Junior Flemmings, Phoenix Rising FC: Flemmings had two goals and one assist to lead Phoenix to a 4-0 victory on Saturday night against Tacoma Defiance.

F – Foster Langsdorf, Portland Timbers 2: Langsdorf scored both goals, including the equalizer with four minutes to go, as T2 moved to the top of the Western Conference in a 2-2 draw with the Switchbacks.

F – Dane Kelly, Indy Eleven: Kelly opened his scoring account for the season with three goals and one assist across a pair of Indy victories on the road against Swope Park and Bethlehem.