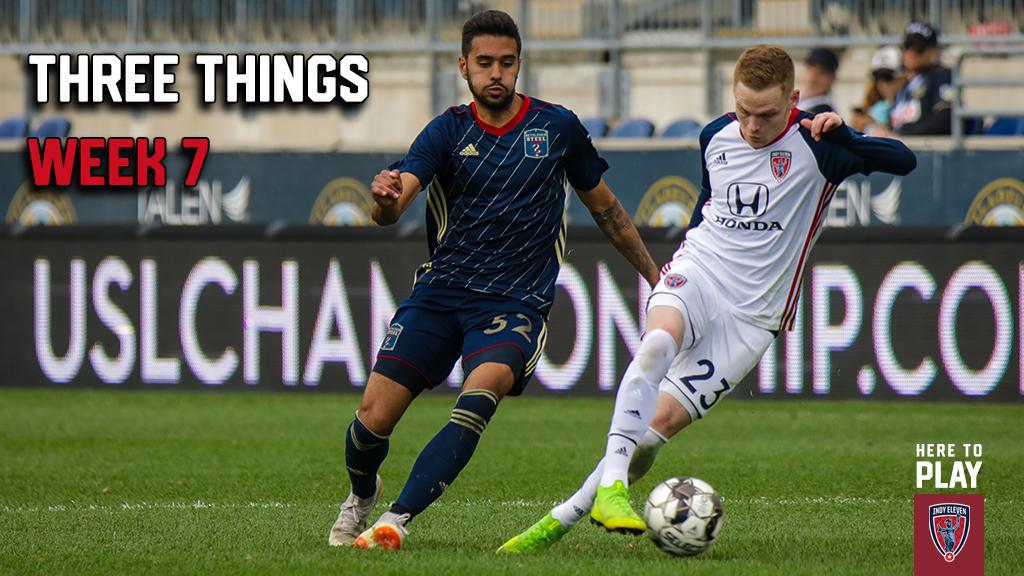 After every game in 2019, IndyEleven.com’s Drew Kamaski will give his three takeaways from the performance of the “Boys in Blue.” This week's edition comes after "Indiana's Team" won 3-1 in Kansas City, Kansas against Swope Park Rangers and 3-0 against Bethlehem Steel FC in Pennsylvania.

Those who asked the real Dane Kelly to please stand up got their response in Week 7. The 28-year-old ended his scoring drought, and boy, did he do it in style, sneaking two into the back of the net against Swope Park Rangers last Monday. Look at the wide smile on Kelly’s face after rounding the ‘keeper and slotting home the game’s first goal – you could see the injection of confidence it provided him.

While the opener showed his nose-for-goal instincts, it was his second on the evening that proved the Championship’s all-time leading goal scorer was back in form. The run into open space to give Thomas Enevoldsen an option. The smooth footwork that kept the first touch close and allowed him to find a yard of space. The driven, accurate (and left-footed!) strike into the top left corner. Kelly’s game against Swope wasn’t a fluke either. He went on to score (another) beauty of a goal against Bethlehem Steel five days later, tallying the Jamaican’s third in two games. If there’s one crucial takeaway from Week 7, it’s that Kelly’s back - and the league better be wary.

Kelly’s back. That’s a good sign. Something else to keep an eye on though is the steady 1-2 combo that Kelly and fellow forward Thomas Enevoldsen provide on the pitch. The chemistry displayed between the forwards in last Monday’s match against Swope Park showed how the pair have the chance to become the most dangerous tandem in the USL Championship.

It took Kelly four minutes after his first goal to find Enevoldsen to double Indy’s early lead. Of course, it was defender Ayoze who played a patented precise, lofted back post pass to Kelly. The Jamaican could’ve easily attempted a one-timer and gone for glory, but he unselfishly laid off a delicate touch to set up Enevoldsen for his second goal of the season. Later in the match, it was Enevoldsen’s ball into the box – set up by an Ayoze 70-yard pass into space that was weighted to perfection – that found the feet of Kelly for Indy’s third.

If that wasn’t enough, it was the build-up play between Ayoze and Enevoldsen that led to another goal for Kelly, this time against Bethlehem Steel. An Enevoldsen-Ayoze 1-2 passing play led to a lengthy through ball that freed Kelly to accrue his 70th all-time USL Championship goal. Three goals a game no longer seems like a tall order with Kelly and Enevoldsen spearheading the attack.

The Boys in Blue are going streaking! The Boys in Blue have been on fire since March 15 – and it’s been a pretty sight. Indiana’s Team racked up its club record fourth consecutive win and 12th consecutive point after defeating Bethlehem Steel FC 3-0 on Saturday, a succession of success coming on the heels of a disappointing opening day loss at Saint Louis.

During the four-game stretch, Head Coach Martin Rennie’s side scored 10 goals and allowed three, earning two clean sheets along the way. The club’s record now rests at 4W-1L-0D through the first five games of the 2019 season, a club best through the first six years of play. The recent tear of victories has the Boys in Blue at third in the Eastern Conference table, level with Tampa Bay Rowdies on points, but ahead on total number of W’s in the 2019 books early on.

Arguably, the most impressive tidbit is that three of the team’s victories have come on the road, as Rennie looks to replicate the positive away form his team displayed at the start of last season. The Scotsman’s squad has collected nine points from the first four road games of 2019, topping 2018’s total by one point in as many games. The difference in the early success this year stems from clinical finishing, Indy’s 10 goals in four away matches so far drubbing last year’s haul by eight.