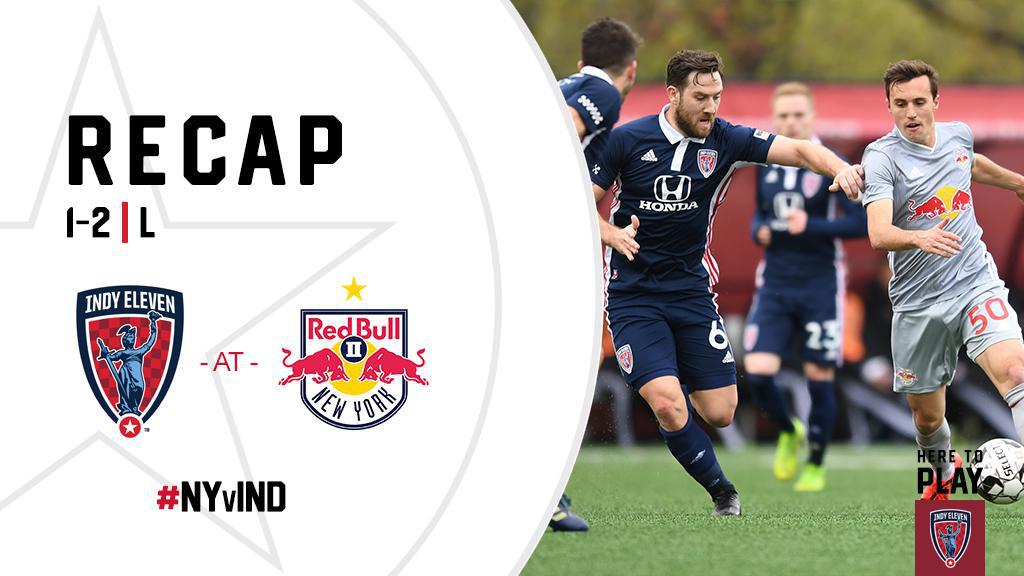 Another fast start on the road was not enough for Indy Eleven, which suffered a 1-2 defeat against New York Red Bulls II at MSU Soccer Park that snapped Indy’s club-record winning streak at four games. Dane Kelly scored his fourth goal in his last three games to put Indy Eleven up early, but goals nine minutes apart in the second half by Red Bulls II strikers Tom Barlow and Jared Stroud reversed the fortunes for Indiana’s Team.

“The first half good for us even though we didn’t have the territorial advantage, we were comfortable, and we were in the lead,” said Indy Eleven Head Coach Martin Rennie. “The second half, again, you have to recognize when you’re playing a game that there’s two teams on the field. Got to give credit to Red Bulls for what they did. Really, a penalty kick and a mistake cost us a game, but the game was quite close.”

After garnering 12 points from an opening stretch that saw the Boys in Blue play five of their first six away from home – including the last three across the entire month of April – Indy Eleven (4W-2L-0D, 6th place in Eastern Conference) will reverse the trend with five home games in as many weeks starting this Wednesday. Meanwhile, New York (5W-1L-1D) avenged its only loss of the season last weekend by getting back into the win column, its 16 points putting the squad just one point behind East leader St. Louis FC.

A relatively open start to the game didn’t immediately yield great chances for either side, however, New York captain Vincent Bezecourt did give notice in the 6th minute with a diving header from the penalty spot that sailed well high.

Indy allowed New York to take a stranglehold of the possession battle early on, but it also took control of the scoreboard in the 13th minute – and it was Kelly once again doing the damage. The defending USL Championship Player of the Week finished off another patented Indy counter attack, running onto midfielder Macauley King’s ball down the left flank and beating New York center back Jordan Scarlett before curling a shot inside the far right post to give Indy the opening goal for the sixth time in as many games to start the 2019 season.

New York pressed mightily for the equalizer, but Indy Eleven ‘keeper Evan Newton was there to thwart every chance – and there were plenty. Newton’s first test came in the 22nd minute, when Barlow tried his luck from outside the area, but the 2018 USL Championship Golden Glove recipient steered the low chance around his near post for a corner. Newton was pressed into service on four shots from distance surrounding the half hour mark, Bezecourt’s skipping shot from 25 yards out in the 28th minute causing the most concern, and a two-handed save.

In the 35th minute it was Barlow’s cut-back to the penalty spot for Marcus Epps causing trouble, and while Newton dove to his right post he wouldn’t have to make a play with the shot pulled just a foot wide left. Newton continued his heavy lifting in the 42nd minute, diving to make a one-handed parry of Stroud’s bending effort from the corner of the area, steering it wide for another corner. Red Bulls II would end the opening stanza with a 12-1 advantage in shots, but Newton’s four saves and Kelly’s clinical finish put the visitors into the locker room up 1-0.

The second half began with a chance inside the opening minute for Indy Eleven midfielder Tyler Pasher, who cut left across the top of the area and uncorked a low shot that Red Bulls II goalkeeper Evan Louro pounced on for his first save of the evening. Barlow looked to finish off a quick counter in the 52nd minute with a bending far post effort that was wide of frame, and three minutes later it was Stroud unlucky not to equalize when he found some space inside the area but skied his shot from 12 yards.

After a Bezecourt free kick chance went wanting in the 58th minute, he would earn New York the chance to equalize from the penalty spot a minute later, when King was ruled to have tripped the Red Bulls II midfielder as he streaked towards the six-yard box. It was Stroud who stepped up for the PK, finishing low and left to even things up at 1-1.

Indy Eleven captain Matthew Watson entered the match in the 64th minute and immediately gave Louro something to think about, his half-chance from 35 yards out forcing the New York netminder to grab the ball off his crossbar. Five minutes later it was another veteran midfielder entering the match for the Boys in Blue, as Kenney Walker made his second appearance as a substitute in as many games after returning from an injury that's kept him sidelined since Week 2.

“Tonight was a difficult game to come into with very fast tempo, but it’ll be good for his fitness and his ability to be ready for the games ahead,” Rennie said. “He’s ready and eager to get back into the team."

After creating several dangerous chances, Barlow was finally open to push one across to give Red Bulls II their first lead in the 69th minute. After being played behind the Eleven backline by a Bezecourt through ball from midfield, Barlow was able to beat a drawn-out Newton low and left for his seventh on the season, putting him into a tie atop the USL Championship’s scoring chart. It looked as if Barlow had quickly doubled the lead in the 73rd minute with a tap in inside the six, but the linesman’s flag was raised for an offside infraction with no hesitation, keeping the scoreline at 2-1 for New York.

While Indy Eleven pushed more numbers forward in an effort to find the equalizer, it was Red Bulls II with the better of the chances as the match entered four minutes of stoppage time. The home side rode out the final minutes to give Indy Eleven its first taste of defeat since a similar 1-2 result at St. Louis FC to begin the season back on March 9.

“It’s a tough game on the road, but it was a close game and one that we can bounce back from,” Rennie said. “We just came off a four-game winning streak, we played a lot of away games and only one home game in the first six. We’ve put ourselves in a very good position during that schedule. It’s very important that we capitalize on playing at home, starting with the next match against Tampa Bay Rowdies.”

Indy Eleven finally returns home to Lucas Oil Stadium this week for a pair of games against old rivals that sit near the top of the Eastern Conference table. The doubleheader week starts this Wednesday, May 1, against the Tampa Bay Rowdies and continues Saturday, May 4, on “Brad Ring Night” against North Carolina FC, with both games kicking off at 7:00 p.m. – and airing live on WISH-TV. Tickets are available for as low as $15 at IndyEleven.com/tickets or by calling 317-685-1100.