Down a Man for 70 Minutes, Boys in Blue Start Month-long Homestand with Gritty Result versus Rowdies 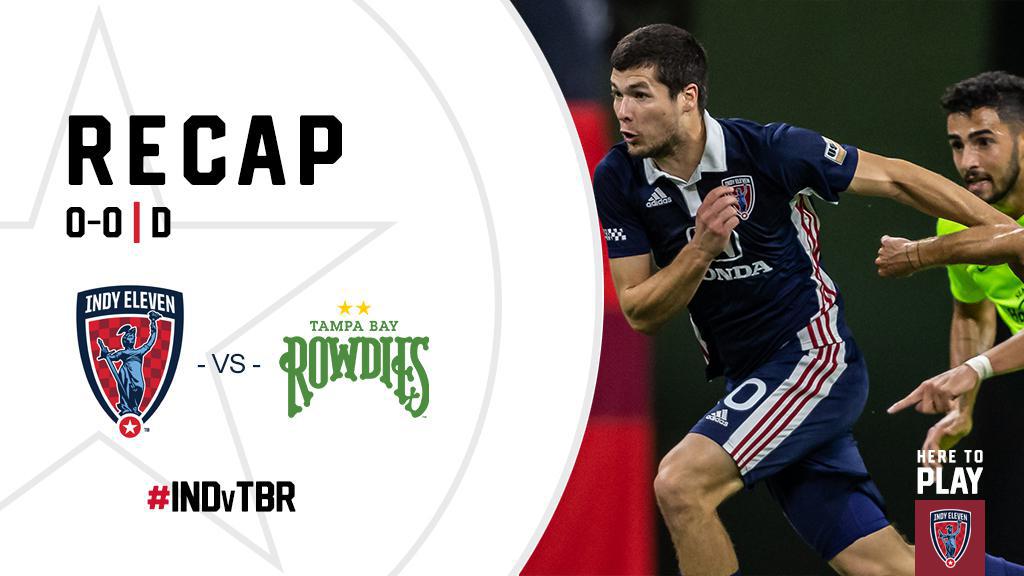 Indy Eleven’s homecoming didn’t go according to script after going a man down 20 minutes in, but the Boys in Blue rode a stout defensive effort to earn a point from a 0-0 draw with the Tampa Bay Rowdies at Lucas Oil Stadium. The first draw of the season for Indy Eleven (4W-2L-1D, 13 pts.) moved Indiana’s Team into a sixth place tie in the Eastern Conference, while Tampa Bay (4W-0L-5D, 17 pts.), the lone remaining undefeated team in the East, pushed into a second-place tie on the conference table.

“To go down to ten men in the early minutes made it so difficult,” said Indy Eleven Head Coach Martin Rennie. “For the first 20 minutes I thought we were really good. We were on the ball. We were energetic. I don’t really have any question about whether we have a good team or good players, but today I got the answer about how much character and fight we have. The guys worked hard. Everybody did their job. Nobody slacked off.”

Eleven forward Thomas Enevoldsen asked the first question of the evening in the eighth minute, ending a counter attack with a thumping shot from the left edge of the area that made Rowdies goalkeeper John McCarthy retreat to his near post for a save. That began a flow of one-way traffic towards the Tampa Bay goal – at least for the next 10 minutes. Eleven defender Paddy Barrett put McCarthy to work again with a header off a corner in the 12th minute – and one minute later picked up a caution for unsporting behavior prior to the ensuing corner.

Unfortunately for the home team, Barrett would see a second yellow card in the 20th minute for a late tackle on Sebastian Guenzatti, putting the Boys in Blue a man down for the first time in 2019. The rest of the first half was largely uneventful, with Tampa Bay unable to put any of its four shots on frame. Guenzatti’s effort from 10 yards that missed jut wide right in stoppage time marked the only serious threat of the first half for Tampa Bay despite the man advantage.

The second half began with Eleven forward Dane Kelly looking to catch McCarthy off guard in the opening seconds, his shot from 30 yards out not missing the left post by much. Rowdies midfielder David Najem tried his own luck from a similar distance five minutes later, a chance that Eleven ‘keeper Evan Newton had covered as it whistled over the crossbar.

Indy Eleven did well to absorb pressure and pick moments to push forward, the approach nearly paying off in the 70th minute when Kenney Walker’s flicked ball was headed back into the Rowdies area by defender Abdoulaye Diakite. Kelly got behind the Tampa Bay backline and was there to meet the ball at the same time as an onrushing McCarthy, who appeared to injure his right arm in the ensuing collision but would stay in the contest after receiving a few minutes of medical attention. In the 81st minute it was Enevoldsen again looking to sneak one in from distance, but the Danish striker’s attempt from 30 yards was collected by McCarthy.

The last five minutes saw the squads trade chances, Guenzatti dragging a good look wide left while Karl Ouimette got on the end of a corner kick with a header that veered left of frame. It was Guenzatti getting one last go of it in the final of four minutes of stoppage, his free header straight out from nine yards skipping wide right, allowing the Boys in Blue to breathe easy – and come out of the proceedings with a point.

Indy Eleven is back home again during its month-long homestand this Saturday, May 4, on “Brad Ring Night” against North Carolina FC. Kickoff at Lucas Oil Stadium is set for 7:00 p.m., with the match airing live on WISH-TV and streaming live on ESPN+. Tickets remain available for as little as $15 at IndyEleven.com/tickets or by calling 317-685-1100.