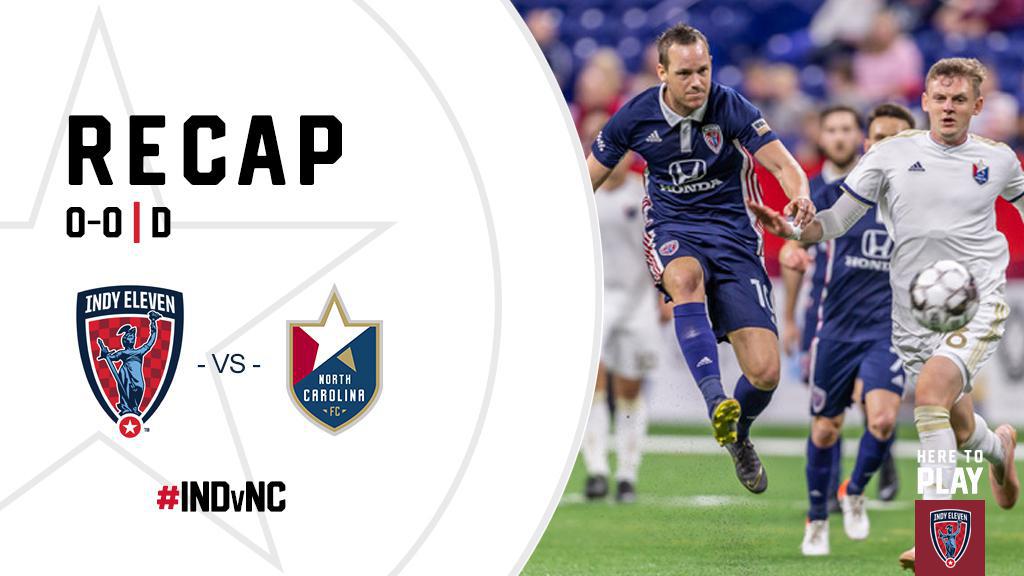 Indy Eleven (4W-1L-2D, T-7th) earned another hard-fought point at home in the club’s second Week 9 match-up, this time via a 0-0 draw against long-time rival North Carolina FC (4W-1L-3D, T-4th). Goalkeeper Evan Newton made three second half saves to collect his third shutout in as many 2019 home contests, and the 41st clean sheet of his USL Championship career, setting the league record in the category.

“The guys in front of me are doing a great job. We’re getting in sync and guys are battling. I think we played a lot better and had good chances,” said Newton, who joined Indy Eleven in the offseason from FC Cincinnati. “You can’t lose if you don’t get scored on. We got a point and we’ll take it and run with it. A little frustrating we didn’t get three, but it could be worse.”

North Carolina looked the fresher side out of the gates, but it was Indy Eleven that nearly nicked the opener against the run of play nine minutes in. Midfielder Nico Matern parlayed a smooth turn on a 50-50 ball in his own defensive third into a free break up the middle of the field, Dane Kelly’s one-touch flick springing forward Tyler Pasher on a 50-yard foray. The speedy winger took one touch too many when baring down on NCFC ‘keeper Alex Tambakis’ goal, allowing a defender to poke the ball away and end a golden opportunity for an early lead.

While fruitless, that play seemed to spark the Boys in Blue, who created numerous chances of quality in the 10 minutes to follow. Kelly, a USL Championship April Player of the Month nominee, had two bites of the apple in the 13th minute, first just getting beat to a pass outside of the NCFC area by Tambakis before his sidewinding effort from 15 yards flared wide. Pasher wreaked more havoc in the 17th minute when his low cross buzzed through the six-yard box before Kelly could catch up to it.

At the stroke of the half-hour Indy Eleven nearly capitalized on its first corner kick opportunity, Alex Crognale forcing Tambakis into a save at his right post off the Indy defender’s header. The last 10 minutes of the half saw Indy press Tambakis into two more saves off of efforts by Thomas Enevoldsen and Ayoze.

As it did early in the first half, “Route 1” opened once again for the Eleven three minutes into the second stanza, this time Enevoldsen’s through ball for Kelly finding its target. The Jamaican was able to fire from 10 yards, but his near-angle shot was sent into the right outside netting. In the 51st minute Neveal Hackshaw, who wore the captain’s armband out of the locker room for the Boys in Blue, did well to rise and connect with Ayoze’s back post corner, but the defender’s header was sent right to Tambakis on his line.

“[Wearing the armband] was great. When [Coach Rennie] brought it to me I was like, ‘Oh me?’ So, being the guy to lead them out was so fantastic,” said Hackshaw. “It made me feel a little above. I have to make sure I’m on point because I have the band on and I have to show leadership.”

It was finally time for Tambakis’ opposite number to get called into service a minute later, and Newton was up to the task for his first saves of the night. The Eleven netminder first extended low to his right, pushing Andre Fortune’s tricky shot from outside the area off his right post before bouncing off the turf to set himself for a kick save off the rebound. The saves were the first for Newton in over three halves of action after not being forced to stop a shot on Wednesday night against Tampa Bay or in this evening’s opening half.

Shots from distance were Indy Eleven’s go-to in the minutes to follow, with Pasher’s 58th minute attempt sent into the hands of Tambakis and Kelly’s three minutes later whistling just over the crossbar. Kelly had another half-chance go wanting in the 63rd minute, his sliding effort to get to Thomas Enevoldsen’s flick sailing high from eight yards out.

North Carolina’s Ben Speas nearly made his old team pay in the 67th minute when he had ample space to fire from 20 yards out on a counter, only to see his low shot with pace gobbled up by Newton without a rebound. In the 77th minute it was Kelly again seeing a ball sit up for him, but he couldn’t steer his shot from 12 yards out on frame. Just minutes after coming into the match, Indy substitute Josh Penn looked to have claims for a penalty after fellow substitute Graham Smith’s swim move put the Eleven attacker to ground inside the area, but the referee let play continue without a whistle.

Three substitutes and three minutes of stoppage time at the end of the second half wasn’t enough for either side to find another scoring opportunity, resulting in a stalemate in the Circle City. The point was not the three Indy desired, but did push its undefeated streak against its former NASL rival to eight games (6W-0L-2D) dating back to October 2016.

“I think we had a lot of good chances, and in both halves we dominated play and defended well, but we need to not be too happy with that and put the ball in the back of the net,” said Indy Eleven head coach Martin Rennie. “The score needs to be on the scoreboard. We’re dominating these games. We’re better than the teams were playing against but we have to show it on the score.”

Prior to getting back to league play in two weekends, Indy Eleven will enter the 106th edition of the Lamar Hunt U.S. Open Cup in a Second Round fixture on Wednesday, May 15. The Boys in Blue will host a 7:00 p.m. kickoff at Butler University’s Sellick Bowl against the winner of next week’s First Round match between Lansing Ignite and AFC Ann Arbor.

Indy Eleven will resume USL Championship action three days later on Saturday, May 18, when it welcomes the Charleston Battery on “Armed Forces Night” at Lucas Oil Stadium. Tickets for the 7:00 p.m. kickoff remain available for as little as $15 at IndyEleven.com/tickets or by calling 317-685-1100.