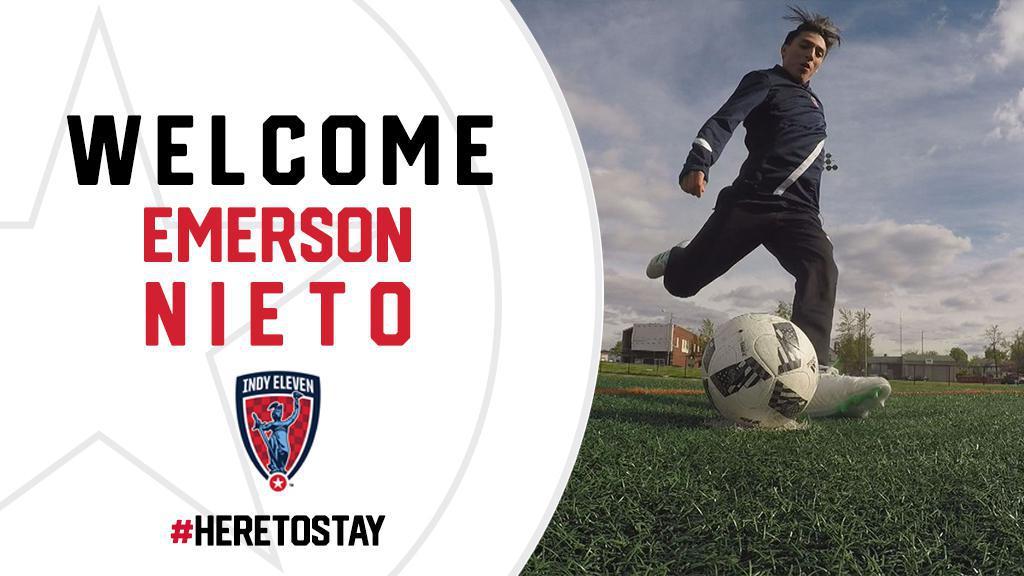 Indy Eleven continued to secure the services of Hoosier-based talent with today’s signing of 17-year-old midfielder Emerson Nieto to a USL Academy contract for the remainder of the 2019 USL Championship season.

Nieto has officially been added to the Indy Eleven roster and will be available for selection as early as tomorrow evening’s Second Round contest in the Lamar Hunt U.S. Open Cup against Lansing Ignite FC (USL League One) at Butler University’s Sellick Bowl (7:00 p.m., tickets at IndyEleven.com). In joining the club as a USL Academy signing, Nieto retains his future NCAA eligibility.

“One of the biggest drives we have within our club is to get the best players from across the state into our system, and Emerson certainly fits that category,” said Indy Eleven Head Coach Martin Rennie. “He’s a hard-working, attacking-minded player with a lot of talent. We believe that young homegrown players can help our club, and we think we’ll be able to help their development as players as well.”

Since the end of 2017, Nieto has taken to the pitch for the Westfield-based Indiana Fire Academy, a U.S. Soccer Development Academy outfit that sees current Eleven Assistant Coach Phil Presser serve as its Academy Director. Nieto started all 19 of his appearances for Indiana Fire – two with the U-16/17 side and 17 for the U-18/19 – across the current 2018/19 USSDA season.

“We are extremely pleased to see Emerson take the next step in his developmental pathway. Emerson is an exceptional talent and has all the right qualities of a top young player,” said Presser. “To continue his development he needs to be pushed defensively and in transition moments within a much greater environment.”

Nieto, who is expected to graduate in Fort Wayne-based Bishop Dwenger High School’s 2020 class, scored 10 goals and 12 assists in 19 varsity appearances for the Saints between 2016-17.

Indy Eleven will enter the 106th edition of the Lamar Hunt U.S. Open Cup in a Second Round fixture this Wednesday, May 15. The Boys in Blue will host a 7:00 p.m. kickoff at Butler University’s Sellick Bowl against USL League One side Lansing Ignite.

Indy Eleven will resume USL Championship action three days later on Saturday, May 18, when it welcomes the Charleston Battery on “Armed Forces Night” at Lucas Oil Stadium. Active military and veterans who show their military ID will receive 20% off tickets and merchandise on the evening, including a limited-edition Indy Eleven military style t-shirt. Tickets for the 7:00 p.m. kickoff remain available for as little as $15 at IndyEleven.com/tickets or by calling 317-685-1100.