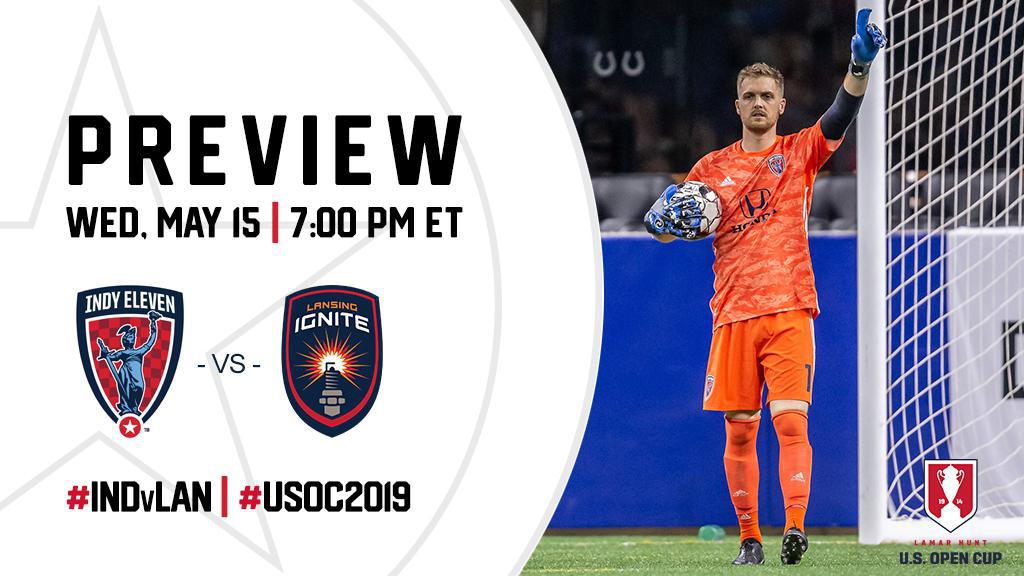 The Boys in Blue claimed a point for the second match in a row after a nil-nil finish against longtime rivals North Carolina FC. Indy goalkeeper Evan Newton recorded his fourth clean sheet of the season while on his way to logging the 41st of his career, landing him the top spot for most clean sheets recorded in USL Championship regular season history. His performance also earned him Player of the Week in Week 9, two weeks after forward Dane Kelly earned the team’s first Player of the Week nod of 2019.

Lansing Ignite FC recorded their first ever U.S. Open Cup victory last week by defeating National Premier Soccer League side AFC Ann Arbor 2-1. Elma N’For scored his first two goals for Lansing Ignite since joining the USL League One expansion side in March, his first at the half-hour mark giving the home side the lead. Ann Arbor leveled the match at ones in the 66th minute, but N’For headed home his second goal – and eventual game-winner – a mere six minutes later.

Lansing drew Greenville Triumph 1-1 in its most recent USL League One regular season fixture. A goal from Ignite forward Ricky Lopez-Espin leveled the score in the 76th minute, eight minutes after his side conceded. The goal was Lopez-Espin’s third goal in four appearances.

While credit for Indy Eleven’s defensive success early in the 2019 USL Championship season deserves to be spread around, the dexterous hands of ‘keeper Evan Newton can certainly raise themselves to take a heaping portion – and they’ll likely be called upon again Wednesday night to avoid a #Cupset against Lansing.

The 31-year-old goalkeeper earned USL Championship Player of the Week in Week 9 after recording back-to-back shutouts against Tampa Bay Rowdies and North Carolina FC. If you haven’t heard, Newton became the all-time clean sheets leader in USL Championship history with 41 career shutouts. So far in 2019, Newton’s recorded four in eight games, along with racking up 17 saves while only conceding seven times, resulting in a stingy 0.88 goals against average.

Lansing defender and Butler University alumni Brandon Fricke will return to his old stomping grounds when Ignite takes on Indy Eleven in the U.S. Open Cup Second Round. The native of Grimes, Iowa, played four years for the Bulldogs from 2011-14, where he made 71 appearances and scored six goals.

The 27-year-old now finds himself located in Michigan with the new USL League One side after spending time with Nybro IF in Sweden, Charlotte Independence (USL Championship), and Des Moines Menace (USL League Two). He currently leads Ignite FC in clearances and has netted one time while playing every minute of the 2019 season thus far.

The U.S. Open Cup Second Round matchup between Indy and Lansing will see two forwards go head-to-head as Indy’s Josh Penn attempts to help his side notch a tournament win first time since 2016, while Lansing’s Ricky Lopez-Espin aims to end Indy’s hopes of a deep run.

In a tournament known for giving depth a chance to shine, Wednesday night could very well be Penn’s chance to break back into coach Martin Rennie’s regular rotation. Penn, 18,  showed his pace in his Boys in Blue debut on March 9 after beating a Saint Louis FC outside back, and he also nearly caused trouble off the bench the last time out against North Carolina FC, a run inside the area causing late-game shouts for a point to the penalty spot. His quickness and majestic footwork allow the young winger to create space for himself to either play a ball in or have a shot on goal with his preferred left foot.

Penn’s counterpart in former Real Monarchs striker Lopez-Espin began his season on the front foot, scoring two goals in three appearances before serving a four-game suspension. The forward’s efficiency in front of net has been on point, placing the three shots on target he’s had in 2019 in the back of the net. The lengthy 6’3” forward is a danger from close range, as all three of his goals have come from inside the opponent’s 18-yard box. Indy’s backline will also have to keep an eye on the 23-year-old during set pieces, as his height makes him perhaps Lansing’s premier aerial threat.

Indy Eleven will enter the 106th edition of the Lamar Hunt U.S. Open Cup in a Second Round fixture this Wednesday, May 15. The Boys in Blue will host a 7:00 p.m. kickoff at Butler University’s Sellick Bowl against USL League One side Lansing Ignite.

Indy Eleven will resume USL Championship action three days later on Saturday, May 18, when it welcomes the Charleston Battery on “Armed Forces Night” at Lucas Oil Stadium. Active military and veterans who show their military ID will receive 20% off tickets and merchandise on the evening, including a limited-edition Indy Eleven military style t-shirt. Tickets for the 7:00 p.m. kickoff remain available for as little as $15 at IndyEleven.com/tickets or by calling 317-685-1100.