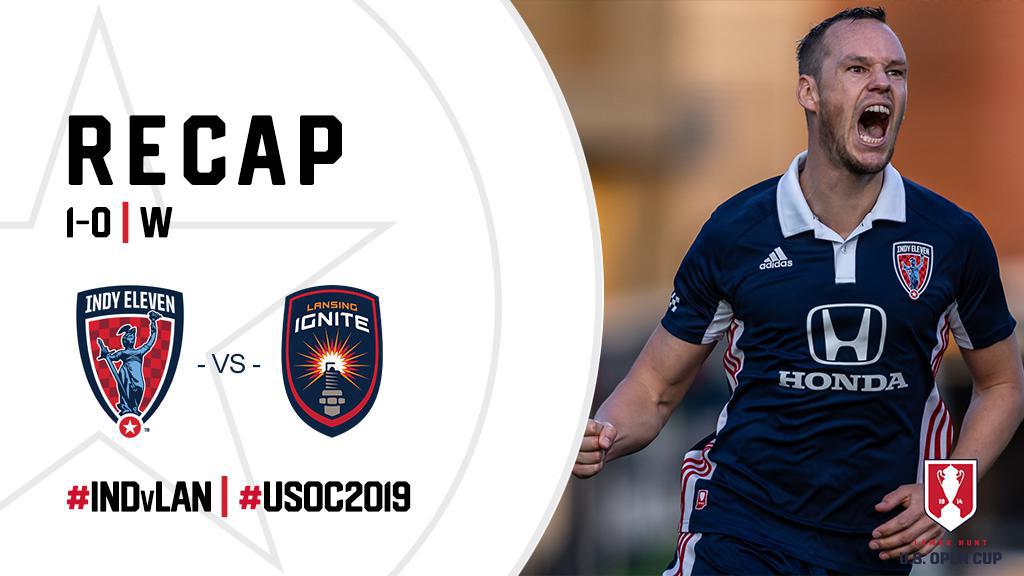 Playing a man down for 70 minutes was not a bridge too “Farr” for Indy Eleven in its Lamar Hunt U.S. Open Cup debut, as goalkeeper Jordan Farr came on in reserve duty to keep a clean sheet and help the Boys in Blue advance past Lansing Ignite FC 1-0 in Second Round action at Butler University’s Sellick Bowl. Forward Thomas Enevoldsen’s 57th minute tally was enough to give Indy Eleven its first USOC win since the 2016 tournament and set up a Third Round match-up at USL Championship cohort Pittsburgh Riverhounds in two weeks’ time.

“Obviously, it was a hard game. It was doubly hard when we went down to 10 men. We had to put a lot of effort into it,” said Indy Eleven Head Coach Martin Rennie. “I knew if we could get a goal that we could expect to defend well. It was nice to get the win as well. It was nice to not go to extra time with ten men. I thought we played really well given the situation.”

Lansing Ignite almost took advantage of an Eleven defensive miscue within 30 seconds of the opening whistle, but thankfully defender Paddy Barrett saved an initial shot off the goalline, and midfielder Kenney Walker followed suit within the six-yard box on the rebounded effort.

A scary moment and quick flash point came in the 16th minute, when Indy Eleven goalkeeper Evan Newton collided with Lansing forward Elma N’for as the two raced for a 50-50 ball just outside of Newton’s area. N’for received medical attention on the field for several minutes, and during the delay match referee Adam Behrens rescinded his initial yellow card to Newton and instead issued a straight red for the challenge, putting Indy Eleven down a man five minutes later.

After a 12-minute delay, the match would restart with Steve Saint-Duc entering up top for N’for, and Farr going in between the posts in what became an impromptu professional debut. Two minutes later the substitutes would be introduced to each other, Saint-Duc’s scuffed shot from 10 yards forcing Farr to make his first save.

Not much came from the next half hour, but waist-deep into 11 minutes of stoppage time Indy Eleven would create danger. Off a designed set piece, Matt Watson got free down the right flank only to see his cross towards the six-yard box driven just over the head of defender Karl Ouimette. A minute later, Lansing’s Rafa Mentzingen found space and tried his luck from 35 yards out, but his pacey shot would sail over the crossbar and mark the final shot of a fairly-even first half.

A sluggish second half would spring to life in the 57th minute when header from Thomas “The Engine” Enevoldsen gave Indy the lead. After a cleared Indy corner, midfielder Tyler Gibson sent the ball back into the mixer from the midfield stripe and found defender Paddy Barrett, whose square header was nodded home by Enevoldsen to break the deadlock.

Ricky Lopez-Espin had a chance to even things up in the 65th minute, but he couldn’t get enough on his near-angled shot to beat defender Neveal Hackshaw, who tracked behind Farr to cover his near post and clear off the goal line for a corner. Lopez-Espin was free again inside the penalty area five minutes later, this time sending a low shot that Farr pounced on with ease. With 15 minutes left in regulation it was Tumi Moshobane’s first-time laser that forced Farr’s best stop of the evening, the second-year ‘keeper batting the chance away off the tips of his gloves before it could reach his upper 90.

The Boys in Blue withstood steady pressure by Ignite FC through the end of regulation and an additional four minutes of stoppage time to survive and advance to the Third Round. Indy Eleven and the Riverhounds are set to meet at Highmark Stadium on the banks of the Monongahela River in downtown Pittsburgh on Wednesday, May 29th, in an USL Championship-Open Cup mashup.

Next LHUSOC Game – Third Round