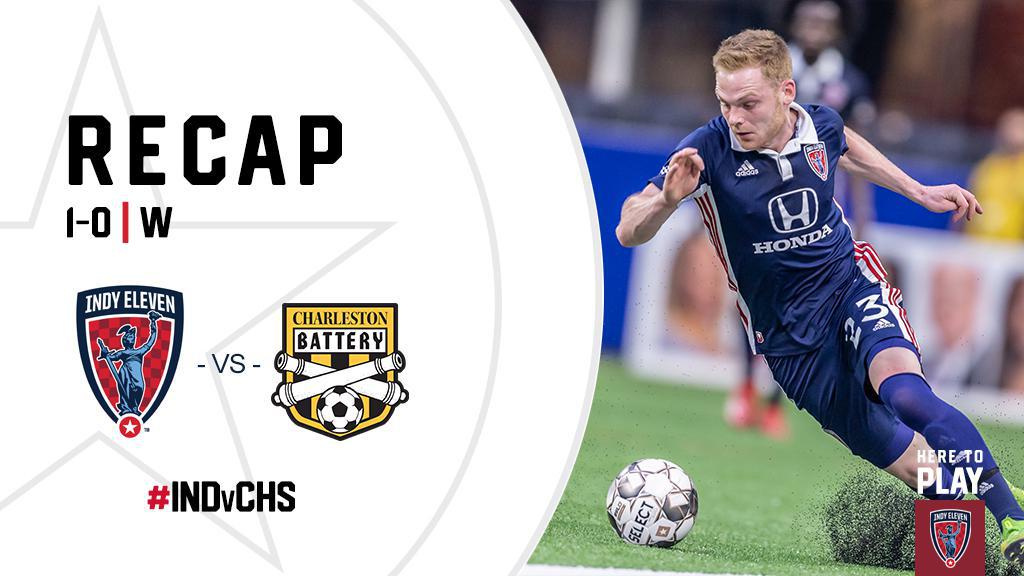 Indy Eleven (5W-2L-2D, 17 pts.) earned a hard-fought three points after defeating Charleston Battery at home thanks to a late goal from Tyler Pasher and another shutout – the team’s fourth in as many home contests in 2019. The victory nudges the Boys in Blue up the Eastern Conference ladder, past Charleston and into a fifth-place tie with Louisville City FC, and extends the squad’s undefeated streak to three games – two draws and a win, all at Lucas Oil Stadium in May.

The match began slowly as each team’s mid-week U.S. Open Cup fixtures appeared to take their toll. Each side took their time breaking into the match as both teams carefully built up play throughout the first half hour, mindful not to allow cheap opportunities. Despite the slow start, it was just after the half hour mark that the Boys in Blue began to apply pressure and force the Charleston Battery defense to earn their money.

“This game was always going to be a tricky game because Charleston are a good team and they know how to pick up points and win games. They’re always in the playoffs,” said Indy Eleven Head Coach Martin Rennie. “It’s always hard coming off a mid-week game. We’ve been kind of unfortunate in the sense all of our home games have been after two days of recovery. As a result, we haven’t been coming out flying and, obviously, Wednesday we were down to ten men for almost the whole game.”

Indy Eleven defender Ayoze was the first to put coals on the fire as he played a low, driven cross from the left side of Charleston’s 18-yard box that nearly found the feet of forward Dane Kelly for the game’s first goal – if not for Joe Kuzminsky’s quick handed save. The chances didn’t end there, as three minutes later forward Thomas Enevoldsen played a long ball over the top of the Charleston back third, forcing Kuzminsky to dart off his line to clear the pass.

Eleven defender Lucas Farias, who made his first starting appearance for the Boys in Blue, created a chance in the 36th minute, Enevoldsen squaring a pass to the Brazilian wide right of Charleston’s six-yard box. Though the setup was promising, Farias’ shot was deflected wide by Kuzminsky. Yet the best chance of the half for both teams came three minutes before the halftime whistle when a delicate through ball from Enevoldsen freed Kelly for a one-on-one shot, but Kuzminsky again came up big to save the Jamaican’s effort 10 yards off his line.

Contrary to the first half, the two sides entered the second half on their front feet. Charleston pressed Indiana’s Team high early, forcing defenders Neveal Hackshaw and Paddy Barret into dual potential goal-saving blocks. Indy Eleven goalkeeper Evan Newton was called into action for the first time in the 53rd minute after a Charleston corner was nearly headed inside the near post, if not for the all-time USL Championship regular season clean sheet record holder’s two-handed reaction.

Indy’s attack responded as Enevoldsen retaliated three minutes after Newton came up big, connecting on Pasher’s leftward swinging cross from the edge of Battery’s 18-yard box, but his effort sailed over the net. Enevoldsen created another good look for himself in the 70th minute from 10 yards out, but had his shot deflected and cleared away by the Battery’s waning defensive line.

The match remained tight until the 84th minute, when Pasher went on a tearing run down the left flank, beating one Charleston defender before powering a shot too hard for Kuzminsky to handle, the shot barreling off his chest and inside the near post to break the deadlock in dramatic fashion.

“It’s 0-0, so everything’s in your hands. If I go nine times and I miss, but I go a tenth time and we get a goal then it gets the job done. I need to stick to what I do and go from there,” explained Pasher. “I got a few balls in the box and luckily got a goal out of it. It’s a job well done for the team, and I’m glad I could help the guys who put in a lot of effort for the team and pull out three points.”

Enevoldsen had a chance to seal the game four minutes later after a cross from Kelly found him open at the back post, but the former Danish international couldn’t convert his acrobatic headed effort.

The lone goal by Pasher, the Canadian’s second of the season, and yet another shutout proved enough to hand the Boys in Blue another three points at home, extending the team’s undefeated streak at home to seven games overall dating back to last September when throwing Wednesday’s U.S. Open Cup win into the mix. The impressive home form can be credited to a series of stout defensive performances, with tonight’s effort extending the team’s overall home shutout streak in USL Championship regular season action to 421 minutes dating back to October 6, 2018 – and obviously including all 360 minutes in 2019 thus far.

Indy Eleven’s busy month of May continues next Saturday, May 25, with the club’s first-ever “Indy 500 Eve” game. Kickoff for “Racing Indy Night” against Nashville SC at Lucas Oil Stadium is set for 7:00 p.m., and the first 500 fans through the gates will receive a special-edition Indy Eleven/IMS cap. Tickets remain available for as little as $15 at indyeleven.com/tickets or by calling 317-685-1100.