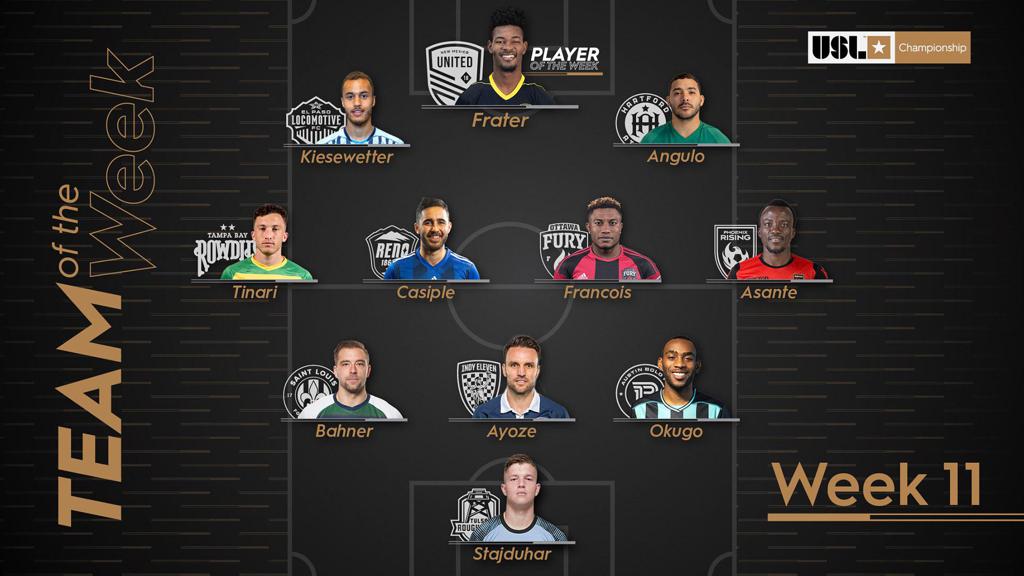 Indy Eleven defender Ayoze Garcia has been voted to the USL Championship Team of the Week for Week 11 of the 2019 season. Ayoze made his 2019 Team of the Week debut in fashion thanks in part to him notching the 84th minute assist in Indy’s 1-0 victory against Charleston Battery last Saturday that bumped the club up the Eastern Conference standings. The 33-year-old’s defensive and distributive performances didn’t go unnoticed either, as he won 10 of 14 duels and completed just over 80 percent of his passes on the evening.

Eleven midfielder Tyler Pasher also earned his second nod on the Team of the Week‘s seven-man bench this season after his dramatic game-winning goal against Charleston, adding to his placement in Week 7.

Known for his tenacity and accuracy, Ayoze has continued to be a playmaking threat for Indy Eleven from his spot on the left flank across his first seven appearances of the season. Despite only being officially credited with two assists on the campaign until now, the veteran defender would have at least three more “hockey assists” should the passes he’s set up leading to goals be counted.

Ayoze continues to display his impeccable offensive and defensive awareness into his second run with the Boys in Blue after having joined the squad last February. In his first season with Indiana’s Team, the Spanish maestro made 29 appearances in the starting lineup for his new club, subbing off only once on his way to scoring four goals and creating eight assists. His 2018 performance was enough to earn him multiple Team of the Week appearances, as well as 2018 USL All-League Second Team honors.

D – Matt Bahner, Saint Louis FC: Bahner made a crucial goal-line clearance to preserve a scoreless draw on the road in Louisville and recorded four recoveries and four clearances defensively.

D – Ayoze, Indy Eleven: Ayoze provided the assist on Indy’s game-winning goal to cap a stellar all-around display that saw him complete 57 of 69 passes and win 10 of 14 duels defensively.

M – Seth Casiple, Reno 1868 FC: Casiple provided the assist on Reno’s late equalizer in Tacoma and recorded eight key passes and eight recoveries over the contest while completing 58 of 72 passes.

M – Solomon Asante, Phoenix Rising FC: Asante had a goal and assist in his return to the starting lineup as Rising FC cruised to a 4-0 win against Las Vegas Lights FC.

F – Jerome Kiesewetter, El Paso Locomotive FC: Kiesewetter scored twice to lead El Paso to a 3-1 victory against Sacramento Republic FC, which moved the expansion side into the playoff positions.

F – Jose Angulo, Hartford Athletic: Angulo scored a pair of goals to lead the Athletic to their first victory in the league, and individually reached 50 regular-season tallies in his Championship career.