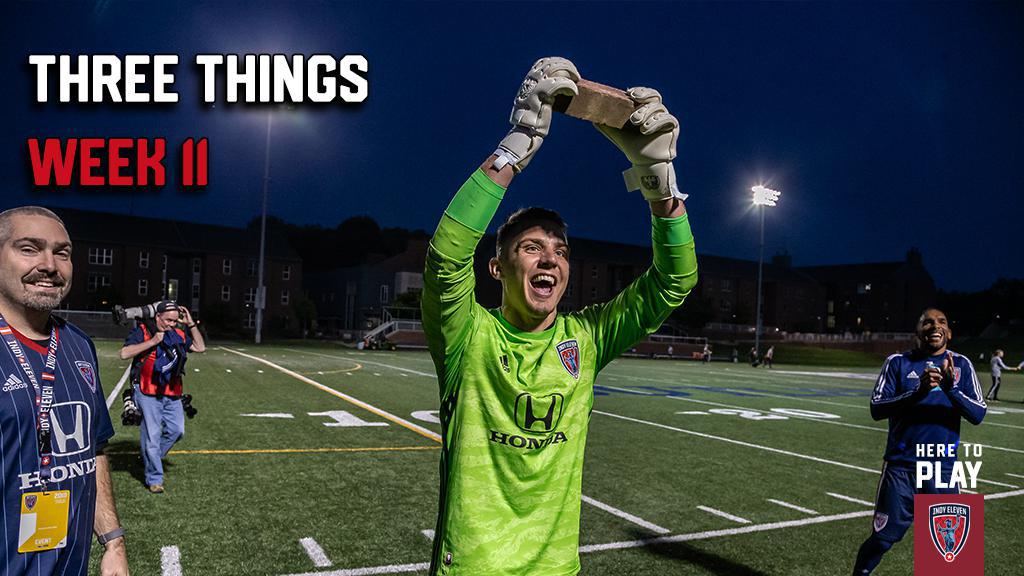 After every game in 2019, IndyEleven.com’s Drew Kamaski will give his three takeaways from the performance of the Boys in Blue. This week's edition comes after Indiana's Team defeated Lansing Ignite in the Second Round of the U.S. Open Cup in the mid-week fixture and Charleston Battery in Week 11 of USL Championship play

I’ve only worked in a true office environment for a little over a year now, but it seems customary to bring donuts when you’ve shown up late or made some department’s life a little harder. That’s what goalkeeper Evan Newton did last Thursday morning after receiving an early red card in Indy’s U.S. Open Cup fixture against Lansing Ignite the previous night. He brought donuts to training to thank his guys for having his back a gracious gesture appreciated by his teammates (just ask defenders Paddy Barrett and Macauley King).

But this point is about more than delicious, empty calories. It’s about how much adversity Indiana’s Team has overcome courtesy of red cards and the toll they take on you not only physically, but mentally. Just ask Head Coach Martin Rennie.

“What’s been important is we’ve had a bit of adversity early in the season,” the Scotsman said. “We’ve had red cards twice in the first 20 minutes.”

Two red cards in the first 20 minutes of two matches two weeks apart; that’s going to take a toll on your squad, mentally, physically and emotionally. What’s most impressive though, were the donuts – aka “zeroes,” aka shutouts – that followed the cards. The squad pulled out a point by keeping an old-school glazed yeast against a goal heavy Tampa Bay Rowdies down a man for 70 minutes, followed by a chocolate cake clean sheet in the face of a strong North Carolina FC three days later.

After a week off to recover, the Boys in Blue found themselves short-handed for 70 minutes after Newton’s early ejection against Lansing. That meant it was Jordan Farr’s turn to make the donuts with the defense (more on him later), and the team rallied to pitch a 1-0 maple long John to advance in the USOC. Another game, another donut (we’ll go vanilla sprinkled) three days later against Charleston helped spur the squad to a pivotal 1-0 win, ended a string of games that tested Rennie’s and the team’s resolve – and fitness.

“We’ve come into home games with only two days recovery, but we’ve still been picking up points and winning games.”

The Hot Hand at Home

Undefeated at home. Curse of the football lines, credit the defense, thank god for majestic own goals, or kiss the left foot of Tyler Pasher … regardless of whatever reason you put the most emphasis on for the home form of the Boys in Blue, they’re undefeated. Lucas Oil Stadium is becoming a fortress, and last Saturday night’s fixture against Charleston Battery helped justify that.

In the first four games at home, the ledger has been a bit unorthodox: four clean sheets – which helped ‘keeper Evan Newton become the newest Lew’s Crew to hold a USL Championship regular season record – two goals, one red card, and no losses.

“We’ve been kind of unfortunate in the sense all of our home games have been after two days of recovery,” Rennie said. “As a result, we haven’t been coming out flying.”

What has been flying is the defense. Indiana’s Team hasn’t allowed a goal at home in 360 minutes during the 2019 season, and 421 minutes dating back to October 6, 2018. But on Saturday night, fans had something to cheer about besides a fourth clean sheet after the 90 minutes against Charleston. The Boys in Blue scored their first goal at home, by our own player, when midfielder Tyler Pasher rocketed a shot off the chest of Charleston’s goaltender into the back of the net to secure a 1-0 win.

Now, with the proverbial monkey off the back of the collective Eleven attack and the squad able to enjoy a full week’s rest, the result could be more streamers floating over the BYB starting Saturday night against Nashville.

It might not have happened the way Rennie expected, but second-year goalkeeper Jordan Farr finally made his professional debut between the sticks for Indy Eleven last Wednesday against Lansing Ignite FC, the appearance coming 15 months after signing in February 2018.

“It was funny,” Rennie said in the minutes following the U.S. Open Cup Second Round win at Butler University’s Sellick Bowl. “I brought him into my office [Tuesday] and spoke to him and said, ‘Look, I’m not going to play you in this game, but I do believe in you and think you’re going to be a great goalkeeper for us. I’ve got no problem putting you into a game when that time comes.’”

What wasn’t funny was Farr’s performance. The 24-year-old made multiple acrobatic saves and looked more composed with every minute under his belt on his way to earning the first clean sheet in the Eleven’s now eight-game LHUSOC history.

“When I got in it felt like home,” Farr said. “It felt fantastic and like I belonged there.”

Farr’s next appearance will be anything but unexpected, the Corban University product is guaranteed to start due to Newton’s USOC red card suspension when Indy travels to take on Pittsburgh Riverhounds SC in the Third Round next Wednesday. This time he’ll have to keep the net empty for a full 90 minutes, a task his head coach is confident he can handle.

“He proved what I already knew – and that is he is a very good goalkeeper.”