Boys in Blue look to remain undefeated at home in 2019 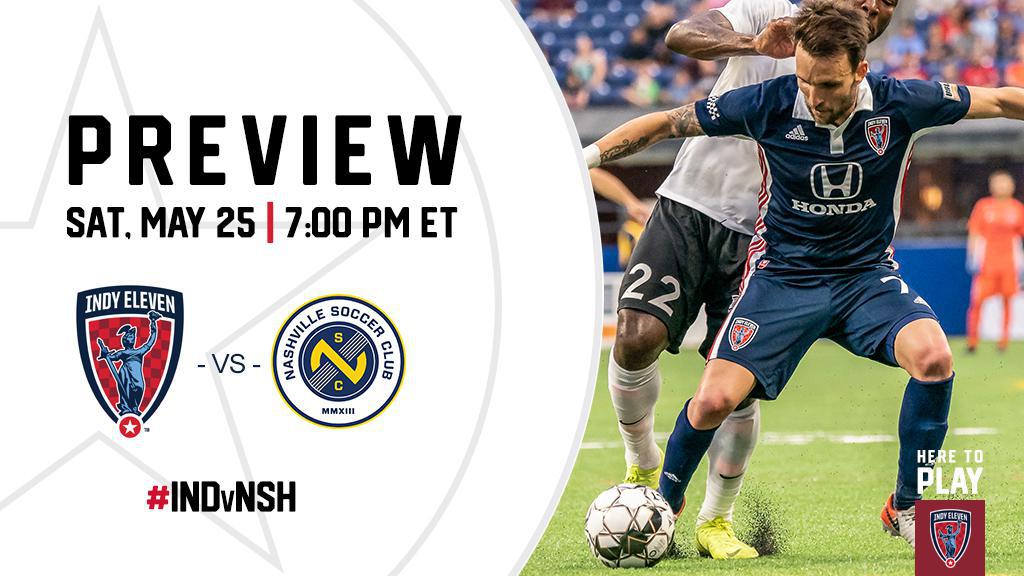 Indy Eleven goalkeeper Evan Newton recorded his third clean sheet in as many games – and his fifth of 2019 – after the Boys in Blue defeated Charleston Battery last Saturday evening, extending the team’s home record to 2W-0L-2D and current undefeated streak to three. In addition to Newton’s latest shutout, midfielder Tyler Pasher found the back of the net for the second time this season in dramatic fashion after scoring the game’s lone goal in the dying minutes of the evening.

A second half penalty kick from Daniel Ríos gave Nashville SC just enough to escape from Birmingham with three points in a 1-0 victory over Legion FC on national television on Wednesday night at BBVA Compass Field. Winger Alan Winn was dragged down in the box in the 62’ minute leading to the penalty kick. Ríos made it count from the spot on the penalty with his eighth goal of the season and second from the penalty spot.

Ayoze Garcia covered his fair share of the pitch last weekend, his yeoman’s effort on both sides of the ball earning the defender a spot on the USL Championship’s Team of the Week.

The wing-back assisted the lone goal of the game, as his ball down the left flank allowed Pasher to go on a bursting run that would set him up to score his second goal of the season. While only being officially credited with two assists (so far this season), Ayoze would have at least three additional “hockey assists” should the passes he set up leading to goals be counted.

Based on his passing accuracy and situational awareness, most optometrists would say Ayoze has 20/20 vision. The veteran defender has provided more goal-scoring opportunities than of any of his teammates with 19 chances created to date, leading forward Thomas Enevoldsen by two.

Nashville SC has its own left back who is a danger on both ends of the field in the veteran Davis. Davis’ bite on the defensive end is born out in a plethora of ways, winning the majority of his tackles (68%), duels (63%), and aerial duels (73%) while also nothing 24 clearances in his 11 appearances thus far. On the attacking side, Davis is tied for fourth in the Eastern Conference with 57 crosses, while his 15 chances created are tied for the team lead with Daniel Rios and Lebo Moloto.

What happens when an unmovable object meets an unstoppable force? We’ll find out this Saturday when 2018 Golden Glove recipient Newton squares off against the Eastern Conference’s co-leading scorer in Rios.

Newton appears to have the upper hand going into the weekend as he looks to surpass his 2018 numbers he set with his former club, FC Cincinnati. During last year’s award-winning campaign, Newton conceded only 16 goals in 72 shots faced, resulting in nine shutouts and a 0.80 goals against average. Nine games into 2019, the Virginia Beach native has tallied five clean sheets and 18 saves, conceding the third fewest goals in the Championship so far (7). As it stands, Newton is on pace to finish the season with 20 clean sheets and 72 saves, assuming he maintains consistent performances for the next 25 fixtures.

Rios was at it again on Wednesday night, scoring in the 63rd minute at Birmingham to give Nashville another three points and the Mexican striker his eighth goal in just 11 appearances, good for a share of the East’s Golden Boot lead alongside New York’s Tom Barlow.

Rios has been outstanding since joining the Music City side last December as Nashville’s first Major League Soccer signing. A 2018 All-League First Team honoree as a member of North Carolina FC, the Chivas de Guadalajara product has completed just over three-fourths of his passes on average this season and created 15 chances. Rios’ ability to find teammates in tough attacking positions and finish plenty himself makes him a threatening presence anywhere in the attacking half of the pitch.