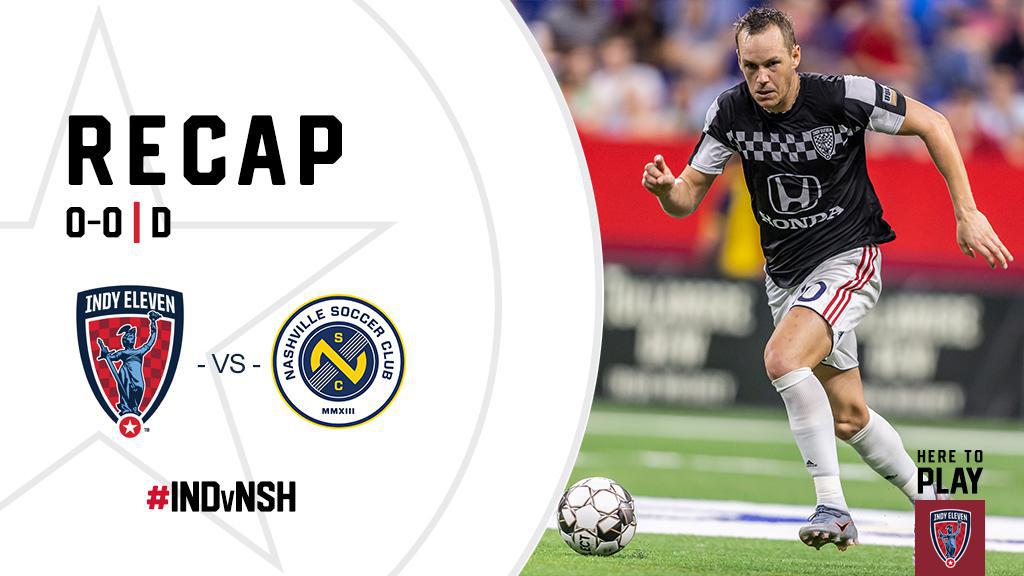 Indy Eleven may have deviated from its patented “Boys in Blue” look at home tonight against Nashville SC, instead donning black-and-white kits in honor of the Indy 500. However, one thing remained the same – a stingy defensive effort in front of the Lucas Oil Stadium faithful. Indiana’s Team notched its fifth shutout in as many home contests to begin the 2019 USL Championship season, tonight doing so via a 0-0 draw, pushing its home undefeated streak to 13 games dating back to last July (7W-0L-6D).

“It’s very good that we’re defending well and amazing we have as many clean sheets we have in a row, especially considering we’re not sitting back,” said Indy Eleven Head Coach Martin Rennie. “We’re getting out and getting at teams. We just haven’t had that little bit of luck in front of goal.”

The first 15 minutes of the anticipated Eastern Conference clash began cautiously, as Indy Eleven (5W-2L-3D, 18 pts.) and Nashville SC (6W-3L-4D, 22 pts.) each side took time to familiarize themselves against the opposite’s five-men backlines. Only one chance was presented in the opening span, as Eleven forward Dane Kelly had a go from the top of the Nashville 18-yard box in the sixth minute, but his strike rose over the crossbar. Seven minutes later Nashville forward Tucker Hume had a chance of his own, a driven shot nullified by Indy defender Karl Ouimette’s block near the top of the penalty area.

It was a minute after the quarter-hour mark when the game’s first true chance arose. Hume was freed up by Lebo Moloto’s lofted pass well inside Indy’s six-yard box, but goalkeeper Evan Newton’s outstretched right foot led to a kick save. Newton’s pair of saves on the evening led to Indiana’s Team extending its home shutout streak to 501 minutes, the last concession at Lucas Oil Stadium coming in last year’s home finale against Bethlehem Steel on October 6.

“You can’t lose games if you get a shutout,” said midfielder Tyler Gibson. “It’s a little frustrating to keep going and not put any goals on the board … but we did our job to get a shutout. It’s a good result. As long as we don’t lose we’ll continue to get better as a team and we have to build on that base.”

That chance seemed to rev Indy’s engines offensively. In the 22nd minute, defender Ayoze’s corner kick found the head of Indy defender Paddy Barrett at the back post, who then flicked the ball back into the center of the box. The squared pass located Ouimette, who redirected a header right into the arms of Nashville netminder Matt Pickens.

The home side continued to press the matter in the 32nd minute after a driven cross from the right side by Kenney Walker nearly found the head of fellow midfielder Kim Do-Heon, but the South Korean couldn’t catch it at the near post, the ball glancing through the penalty area untouched. This evening marked Kim’s first appearance in the Indy starting line-up, his insertion for Nico Matern marking the only change by Rennie from last Saturday’s first XI against Charleston.

Indy again asked questions just before the halftime whistle when defender Lucas Farias played a cross from the right side deep into the Nashville box, forcing Pickens to again come off his line and punch clear. Walker tried to catch Pickens in no man’s land by striking the ball from distance, but Pickens was quick to react and deflected the second effort, keeping the scores level going into the break.

The Boys in Blue game out of the locker rooms the stronger side, creating multiple chances in the first ten minutes. Ayoze played yet another appetizing cross that found the head of Farias in Nashville’s box, but his header pushed wide. Minutes later, Barrett found himself unmarked in the center of the penalty area after Ayoze lofted in a free kick from 40 yards out, but the Irishman was unable to convert the open opportunity.

Just after the hour mark Nashville retaliated with their own effort via forward Ropapa Mensah, who carried the ball down the right flank and into the Indy Eleven 18-yard box. Mensah’s cross found the foot of Hume for a first-time shot that whistled just over the crossbar.

It wasn’t until the 83rd minute that another opportunity would present itself for either team. Enevoldsen’s clever through ball nearly created a one-on-one opportunity between Kelly and Pickens, but a sliding touch brought a halt to the break. It was then Enevoldsen with the last clear-cut chance to change the scoreline, but his right-footed effort in the 87th minute carried over the net. Nothing would come from eight minutes of stoppage time, except another gritty point for Indiana’s Team and an extension of its impressive home undefeated and shutout streaks.

Indy Eleven has yet another busy week ahead, featuring a home-and-away series against Pittsburgh Riverhounds SC across a pair of competitions. First, the “Boys in Blue” will head to the Steel City this Wednesday, May 29, for a Third Round affair in the Lamar Hunt U.S. Open Cup, which kicks off from Highmark Stadium at 7:00 p.m. (streaming live online via ESPN+).

Next Saturday, June 1, Indiana’s Team will turn around to welcome the Riverhounds for the last match of a five-game homestand at Lucas Oil Stadium. Kickoff on First Responders Night for both teams’ return to USL Championship action is set for 7:00 p.m., and will be followed by the annual “Battle of the Badges” contest between the men and women of the Indianapolis Fire Department and Indianapolis Metropolitan Police Department. Tickets for next Saturday’s game remain available for as little as $15 at indyeleven.com/tickets or by calling 317-685-1100.