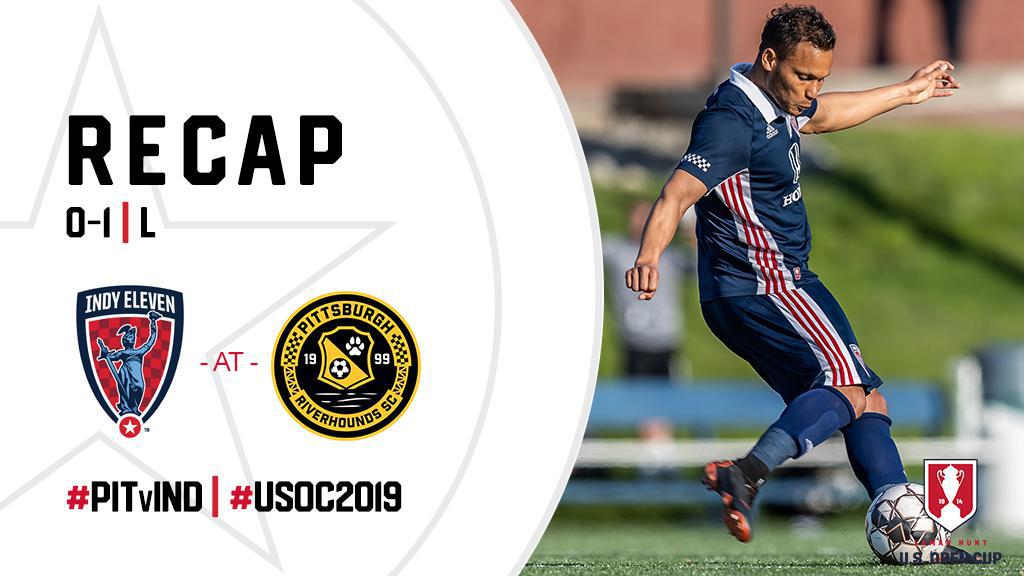 Everything but the goal has been Indy Eleven’s story in May, and tonight the pattern resulted in elimination from the 2019 Lamar Hunt U.S. Open Cup, Indiana’s Team gamely falling 1-0 at fellow USL Championship side Pittsburgh Riverhounds on a rainy evening at Highmark Stadium. The Boys in Blue created a multitude of chances but were unable to put the ball in the back of the net, the frustrating performance seeing the side exit cup play in the Third Round.

“Tonight we hardly gave up any chances and ended up with a defeat. In the first half we actually played really well. We were in complete control of the game and passed the ball well and again had a couple of decent chances,” said Indy Eleven Head Coach Martin Rennie. “We have to take those, because, if you don’t, the game stays tight and there’s the chance that if you don’t take the next one, or the next one, or the next one then the other team might get one, and that’s what happened tonight.”

After a 45-minute delay to begin the match due to storms in Western Pennsylvania, the first half began as a testy affair as both teams looked to control possession and create a clear chance on goal. The first of those fell for Pittsburgh forward Neco Brett in the 13th minute, when he created space for a low, driven cross that fired through Indy Eleven goalkeeper Jordan Farr’s box untouched. Three minutes later, Brett found space to unleash a shot from the right side of the Indy’s defensive third 25 yards out, but the effort strayed just left of the frame.

Just a minute later, Indy retaliated with its first efforts of the match. A quick one-two involving forward Thomas Enevoldsen and midfielder Macauley King led to the Englishman playing in two crosses back-to-back. After the first was deflected back to King, he played in a second ball to the far post that found Tyler Pasher, but the midfielder was unable to redirect the cross.

Indy Eleven continued to take more control of the opening half, its next best chance coming in the 25th minute when forward Josh Penn’s hustle on the endline earned a corner kick. Pasher would take the ensuing corner and play in a low, driven cross to the near post that was forced off the line by a Riverhounds defender guarding the woodwork.

It was Enevoldsen who would garnish the best chance of the first half in the 40th minute. A glancing run by Pasher down the left flank saw the Canadian beat a defender before laying off a soft pass to the Danish striker waiting just outside the center of the Pittsburgh 18-yard box. Enevoldsen would strike first time, unleashing a right footed effort that would have found the upper left 90 – if not for the outstretched paw of Riverhounds SC ‘keeper Kyle Morton.

The ensuing corner in the 41st minute would find the head of Indy defender Neveal Hackshaw at the penalty spot after a scramble in the box. The Trinidad & Tobago’s redirected header landed safely in the arms of Morton for the last action of the first half as the sides entered the locker rooms with the scores level at nil-nil.

The second half started out feisty as the sides came out of the locker rooms with a much more serious tone. Indy created the first opportunity six minutes into the second half when Enevoldsen struck a shot from just passed 25 yards out. The driven shot resulted in a parried save from Morton that Pasher was nearly able to redirect into net if not for a tight angle.

Brett responded in the 56th minute with a well hit, left footed effort that forced Farr to hold his spot slightly off his line in his first true test on the night. Pittsburgh continued to press high and nearly created another clean shot on goal three minutes later, Brett was played in but defender Karl Ouimette’s well-timed slide tackle eliminated the threat before Jordan was called back into action.

Indy again looked to be in a favorable position to break the deadlock in the 61st minute after a through ball by Pasher freed Enevoldsen in the right of Pittsburgh’s box before the forward played a square pass across the face of goal. Penn dashed ahead to connect with the pass inside the six-yard territory, but was ultimately unable to steer the chance into the back of the net as the low ball carried wide.

Ten minutes later, Pittsburgh nearly captured the lead of the match if not for a goal line save from Indy’s net minder. An initial deflection found Brett at the back post, who volleyed across the face of goal nearly connecting with Pittsburgh’s Ryan James. Barrel chested Indy defender Paddy Barret deflected the effort and Farr, who started his first match for the Boys in Blue, collected before the Riverhounds could continue their attack.

Indiana’s Team’s next good look came off a direct free kick from Enevoldsen just outside the top of Pittsburgh’s penalty area, but the Dane’s free kick rebounded off the wall quickly followed by a second attempt. The second deflection fell to the feet of midfielder Tyler Gibson, whose left footed volley rolled inches left of the Pittsburgh net.

Ultimately, it was a goal from 81st minute Pittsburgh substitute Kenardo Forbes that decided the match. The 31-year-old tucked away the game winner four minutes after coming on as a low, driven shot from distance skidded off the turf and past Farr’s outstretched arms, finding the back of Indy’s net. The goal was the first that Indy conceded in the last 675 minutes of play.

Indy’s last chance at redemption fell at the feet of Enevoldsen in the 88th minute after midfielder Kenney Walker played in a header that found the Danish forward wide open at the back post. Despite what seemed to be the equalizer, Enevoldsen placed his shot just wide of the net. Five minutes later the referee blew the whistle for the final time as the game finished 1-0 in Pittsburgh’s favor.

“The game is about scoring goals. Really, the only reason we haven’t won any of the games we’ve played recently is that final third, that final touch … we’ve been defending well, possessing the ball well, creating chances, pressing well, we’ve done all the things well apart from putting the ball in the back of the net,” said Rennie. “So we’re in that spell at the moment where we need to keep doing the other things well but we need to make sure that final third is done right because, until then, it continues to be frustrating.”

Indiana’s Team will turn around to welcome the Riverhounds for the last match of a five-game homestand at Lucas Oil Stadium. Kickoff on First Responders Night for both teams’ return to USL Championship action is set for 7:00 p.m., and will be followed by the annual “Battle of the Badges” contest between the men and women of the Indianapolis Fire Department and Indianapolis Metropolitan Police Department. Tickets for Saturday’s game remain available for as little as $15 at indyeleven.com/tickets or by calling 317-685-1100.