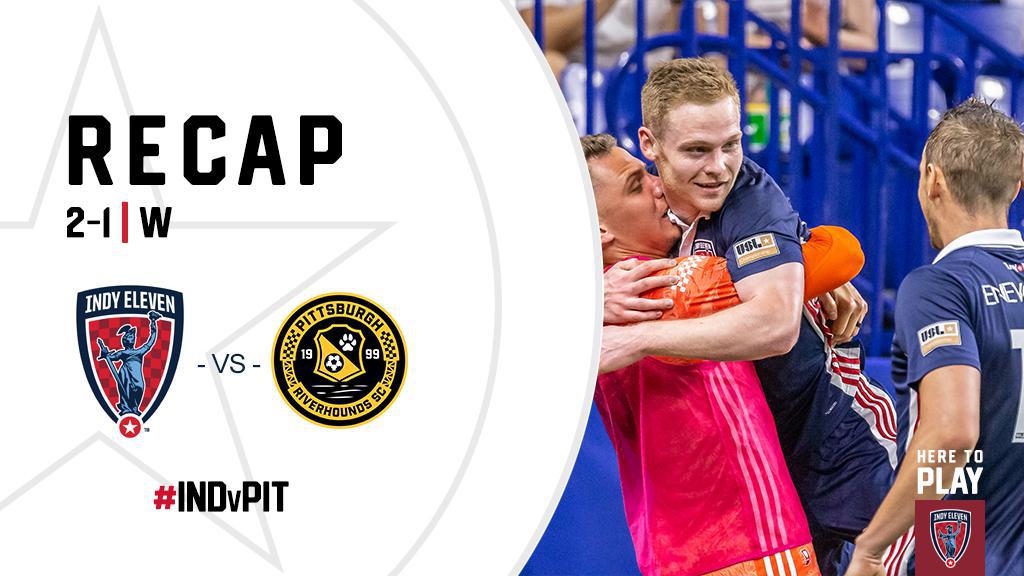 Indiana’s Team extended its home undefeated streak in USL Championship action to 14 games – including the first six in 2019 – courtesy of a dramatic 2-1 victory over Pittsburgh Riverhounds SC. Goals from the midfield duo of Kenney Walker and Tyler Pasher in the game’s final 20 minutes helped exact a bit of revenge for Pittsburgh’s win on Wednesday between the two squads in Lamar Hunt U.S. Open Cup action, and also vaulted Indy Eleven (6W-2L-3D, 21 pts.) into a fourth place tie on the Eastern Conference ladder.

“We have to really completely connect as a team. We have to sacrifice more for each other. We have to be more selfless. I think that happened tonight. I think that’s a turning moment for us where guys see they’re here to make a great team. The only people they have to help them is their teammates,” explained Rennie after the match. “That was something that changed from Wednesday night to today. It’s not that we didn’t play well or deserve more Wednesday, but tonight we had an edge about us and it made a difference.”

The Boys in Blue created the first look at goal four minutes after kickoff, when a lofted ball freed Pasher for an in-swinging effort to forward Dane Kelly. The left-footed cross connected with the Jamaican, but he was unable to redirect on target. Indiana’s Team continued to apply pressure, defender Lucas Farias’s deep cross from the right found Pasher creeping towards the back post in the 13th minute. The pacey midfielder dropped another cross into the visitor’s box, but into the arms of Pittsburgh ‘keeper Austin Pack as he charged off his line.

The Riverhounds retaliated on the quarter-hour, scoring the game’s opening goal in their first look on net. Captain Kenardo Forbes lifted a pass into Indy’s 18-yard box that was controlled by forward Christian Volesky, who played a driven pass across the area. Midfielder Robbie Mertz. controlled the pass and unleashed a shot that deflected off the paw of diving Indy goalkeeper Evan Newton and into the net. The goal was the first allowed at home in six games through 2019 (464 minutes), and the first conceded in the last 381 minutes of regular season play.

Indy Eleven attempted to retaliate in the 20th minute, when a shot by forward Thomas Enevoldsen deflected out for a corner. Indy midfielder Nico Matern would play in the ensuing corner to the back post, connecting with the head of Mitchell Osmond. The Australian defender, making his first professional start on the evening, saw his header lost in a scrum of players, and after the ball eventually found its way back to Osmond his rebound effort was deflected wide for  a corner.

Pittsburgh had a chance to take a two-nil lead at the half hour mark after a corner taken by midfelder Kevin Kerr found the head of midfielder Steevan Dos Santos. Dos Santos connected with the ball well and got plenty on the header, but luckily the chance was sent just over the crossbar.

Pasher continued to do everything he could to level in the 39th minute. A pacey run from the Canadian down the left ended with him playing in a ball aimed towards the open Kelly at the center spot, but an outstretched arm of Pack nudged the ball ever-so-slightly and kept Kelly from burying.

While Pasher tried to bring the scoreline level, it was Newton who kept it from rising to two with a two saves minutes before the halftime whistle. A shot from Volesky deflected off the foot of Osmond, forcing Newton to change his momentum and make the save. Then a minute later in first half stoppage time, Volesky forced Newton into another stop of his right-footed effort, keeping the score at 1-0 going into the locker rooms.

The second half began on a much slower note than the first, the first opportunity coming in the 64th minute. A corner played in by the recent substitute Walker would be cleared out by Pittsburgh’s defense, but only as far as another Indy substitute, Kim Do-Heon, who would have a go from 25 yards-out. The Korean’s shot would find a way through the scrum and land at the feet of defender Karl Ouimette, who found himself one-on-one with Pack, but couldn’t convert.

Seven minutes later, the Boys in Blue would draw level after an immaculate hit from Walker.

Pasher found room on the flank to play in a cross that would carry to the far post all the way to defender Lucas Farias. Farias controlled the ball and laid off a pass to Walker, whose swerving left-footed effort from just outside the 18-yard box cruised into the top-left corner of the net, giving Pack no chance and evening the affair.

“Just mainly to score a goal,” was Rennie’s explanation for why he inserted the veteran Walker into the match. “He’s an important player for us. We played three games in a week, so it was really good to get some energy for us. He made a big impact. It was a really good goal. He played a lot of good balls for us into the corner and killed the game well. His overall performance gave us energy and gave us a lift.”

Pasher would become goal scorer soon after playing creator. Ten minutes later, it was Enevoldsen who played a through pass into the left side of the box to Pasher, finding himself with enough room to take a clean touch forward and drive a near-post shot past Pack – nearly a carbon copy of his late game-winner two weeks earlier against Charleston.

The game’s last action would feature a red card to Pittsburgh’s Mark Forrest in the 91st minute after a collision with Hackshaw. Minutes later the referee would blow the final whistle as Indiana’s Team claimed three points in the final match of a five-game home stretch that put its home record in 2019 to 3W-0L-3D. The Boys in Blue are now undefeated in their Lucas Oil Stadium fortress in their last 14 games, an 8W-0L-6D run dating back to July 7, 2018.

After a month at home in league action, Indy Eleven will now hit the road the next two weekends, beginning with next Saturday’s first-ever meeting against expansion side Memphis 901 FC. Kickoff for the contest at AutoZone Park is set for 8:30 p.m., and the match will be streamed live online via ESPN+.

After another road tilt on June 15 at another expansion side, Loudoun United FC, Indy Eleven will return to Lucas Oil Stadium on Saturday, June 22, when it welcomes Atlanta United 2 to the Circle City for a 7:00 p.m. kickoff. Tickets for that contest – and matches in quick succession on June 26 against Birmingham Legion FC and a rivalry contest against Louisville City FC on June 29 – remain available for as little as $15 and can be purchased at indyeleven.com/tickets or by calling 317-685-1100.