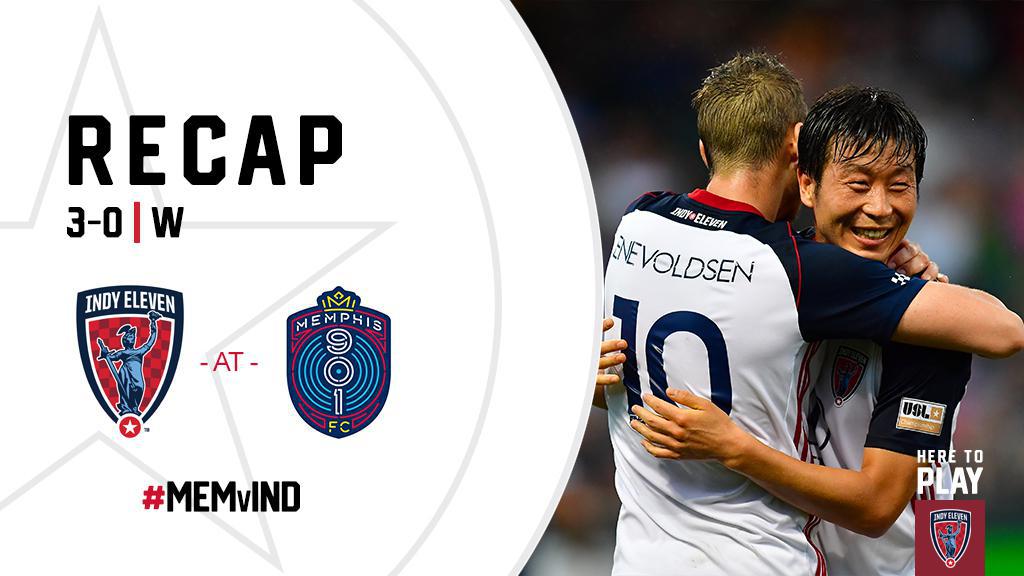 Indiana’s Team extended its current undefeated streak to six after a 3-0 shutout on the road against expansion side Memphis 901 FC. Goals from Thomas Enevoldsen, Kim Do-heon and Tyler Pasher moves Indy Eleven up the ranks to third place in the Eastern Conference (7W-2L-3D, 24 pts.), trailing the top spot by just five points with two games in hand.

“Right from the beginning we had decent rhythm and great possession. We didn’t give up too many chances and we obviously scored fantastic goal in the first half,” said Indy Eleven Head Coach Martin Rennie. “That meant that Memphis had to attack and come out a little bit more, which created some space for us to attack ourselves. It was great to get some goals early in the second half, which meant the game was in our favor and we managed it well.”

It was a bit of touch ‘n’ go play in the opening minutes as each side began to warm up to one another. Pasher made the first most with a darting run through the top of Memphis’ 18-yard box in the fourth minute when a grounded pass from Kenney Walker initialed the play, but the Canadian’s effort was hacked away by Marc Burch. Defender Paddy Barrett had a go at goal via Tyler Gibson’s in-swinging cross following a corner three minutes later, but the Irishman nodded the ball to the right of the far post for a Memphis goal kick.

Memphis began to apply offensive pressure in the 11th minute when midfielder Lagos Kunga launched a shot down the center almost 20 yards out, deflected across the pitch by Gibson. Memphis’ Wesley Charpie recovered possession before the ball could fall over the touchline, quickly dribbling towards Indy’s goal before making a lofted shot that was easily collected by goalkeeper Evan Newton.

Eighteen minutes eclipsed before the match saw its next legitimate shot on target. A low left-footed long shot from Gibson made its way towards Memphis’ net, but a light falling dive from 901 goalkeeper Jeff Caldwell was enough to keep the attempt from finding the back of the net.

It wasn’t long after that Indiana’s Team found the first its three goals of the evening. A deep cross by Walker from behind the center circle in Indy’s half found Enevoldsen near the top of Memphis’ 18-yard box. The Dane went toe-to-toe with Jacob Hauser-Ramsey in 901’s penalty area before curling a shot off the far-right woodwork and into the net.

Memphis looked to level the playing field six minutes after conceding, Charpie going for goal outside Indy’s 18-yard box with a driven right-footed shot that Newton collapsed on top of to save. The home side made several more runs at Indy’s net before the halftime whistle, each chance missing wide or high and ending in the stands.

Indy was awarded a free kick at the top of Memphis’ box five minutes after the start of the second half, via a yellow-card challenge by Charpie that brought Pasher down near the area. Do-heon stepped up and fired a sharp low shot near the edge of a wall of Memphis players that clipped Dan Metzger boot, chipping over Caldwell to double Indy’s lead.

Indy’s offensive onslaught continued as the team widened the scoring gap to 3-0 in the 58th minute. A short pass from Enevoldsen opened Kelly for a barreling run through the top of 901’s box. The Jamaican cut a fast pass to his left, where the short cross was settled by Pasher along the top of the six-yard line before being buried into the open net. The goal was Pasher’s second in as many games after scoring the game-winner in last Saturday’s 2-1 victory against Pittsburgh Riverhounds SC.

The Bluff City side turned up the heat in the 61st minute when former Boys in Blue Elliot Collier attempted to net a near-post strike from the right side of the goal, kept clear thanks to Newton’s quick reflexes. Memphis returned for another shot 22 seconds later when linking play between Carmel native Cameron Lindley and Jochen Graf put a speedy header on target, which Newton neutralized once again.

It wasn’t long after those saves that the USL Championship all-time clean sheet record holder was forced off the pitch due to an unknown injury. Goalkeeper Jordan Farr entered the match in the 72nd minute, making his first regular season debut. Though the rookie keeper saw nearly 20 minutes of professional play, Farr went untested by Memphis for the remainder of the match.

Indy Eleven will continue its away swing next Saturday in the team’s first-ever meeting against expansion side Loudoun United FC. Kickoff for the contest at Audi Stadium is set for 7:00 p.m., and the match will be streamed live online via ESPN+.