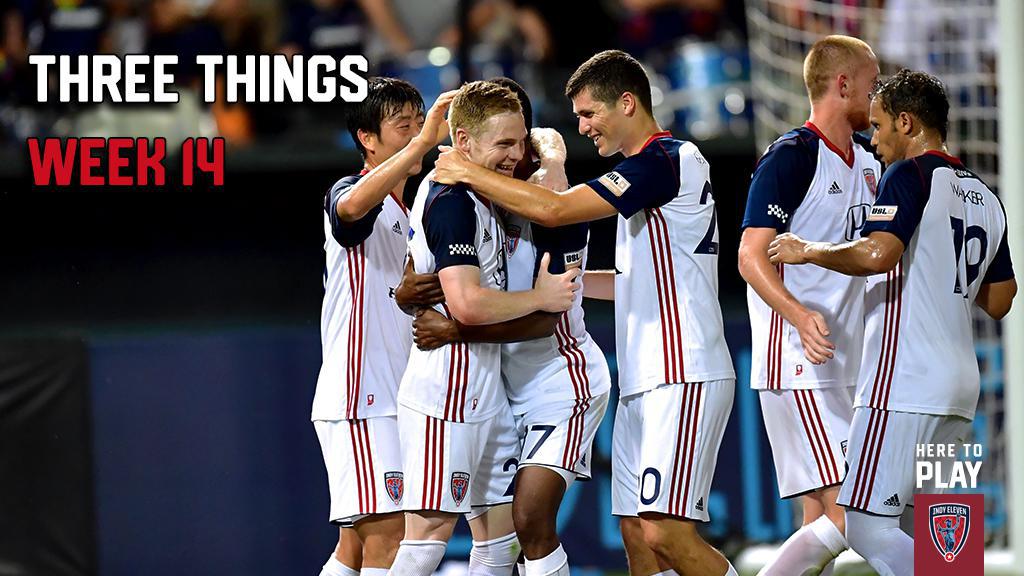 After every game in 2019, IndyEleven.com’s Drew Kamaski will give his three takeaways from the performance of the Boys in Blue. This week's edition comes after Indiana's Team defeated Eastern Conference side Memphis 901 FC 3-0 on the road in Week 14 USL Championship play.

GOALS! GOALS! GOALS! Saturday night’s fixture at Memphis 901 FC marks the fourth game out of six on the road this season that Indiana’s Team has put three past the opposing goalkeeper. The trio of goals in Bluff City came via a curler rebounding off the woodwork from forward Thomas Enevoldsen, followed by Kim Do-heon’s first Indy Eleven goal off a close-range free kick and capped by midfielder Tyler Pasher’s tap into the open net from the top of the six-yard box.

Scoring on the road this season hasn’t been an issue for the Boys in Blue as seven different players have recorded goals, and four of which have posted more than one. Forward Dane Kelly leads the charge having scored all four of his goals so far this season on the road, with striking partner Enevoldsen trailing him at three. Pasher and defender Neveal Hackshaw have each scored a pair of goals and last (but not least), midfielders Macauley King, Tyler Gibson and Kim have each netted one.

Three goals aren’t the only reason the Boys in Blue came back with three points on the road, goalkeeper Evan Newton made three saves on his way to keeping another clean sheet before exiting the match in the 72nd minute. And make no mistake either- the shots Newton faced weren’t of the “Indy-Eleven’s-defense-has-played-so-well-Newton-caught-two-lofted-free-kicks-for-saves” variety.

A pair of massive saves just moments apart in the 61st minute kept Newton’s squad on the front foot in the team’s first away fixture since April 28. The first was a strong, near post, left-footed effort by former Boys in Blue Elliot Collier that Newton pawed down. A redirected, powerful header from distance was fired towards Newton’s near post once again less than 30 seconds later, but the 2018 USL Championship Golden Glove recipient made an extended save that surely reminded fans how he earned the aforementioned award.

Don’t let the team’s inspiring home form throughout the month of May (and the 14-home-game undefeated streak dating back to July 7, 2018) fool you. Indiana’s Team has been remarkable on the road in 2019. Sure, the only two losses so far this season have come on the road, but the squad has claimed 12 points from a possible 18 through the first six away fixture. A 4W-2L-0D record outside of Indiana’s borders has been accompanied by 14 goals scored, while conceding seven and recording two clean sheets. It’s hard to be Arsenals’ “The Invincibles”, but it’s far from a bad run.

Next up is Eastern Conference expansion side Loudoun United FC on the road, who hold a 0W-1L-1D record when playing home field advantage (if you want to call it that). Loudoun has been forced to play majority of its matches on the road while the team’s Leesburg, Va. based stadium remains under construction. In the meantime, Loudoun has fielded its home matches at Major League Soccer’s D.C. United’s Audi Field, where the Championship affiliate team has both conceded and scored four goals.

Indy Eleven will continue its away swing this Saturday in the team’s first-ever meeting against expansion side Loudoun United FC. Kickoff for the contest at Audi Stadium is set for 7:00 p.m., and the match will be streamed live online via ESPN+.