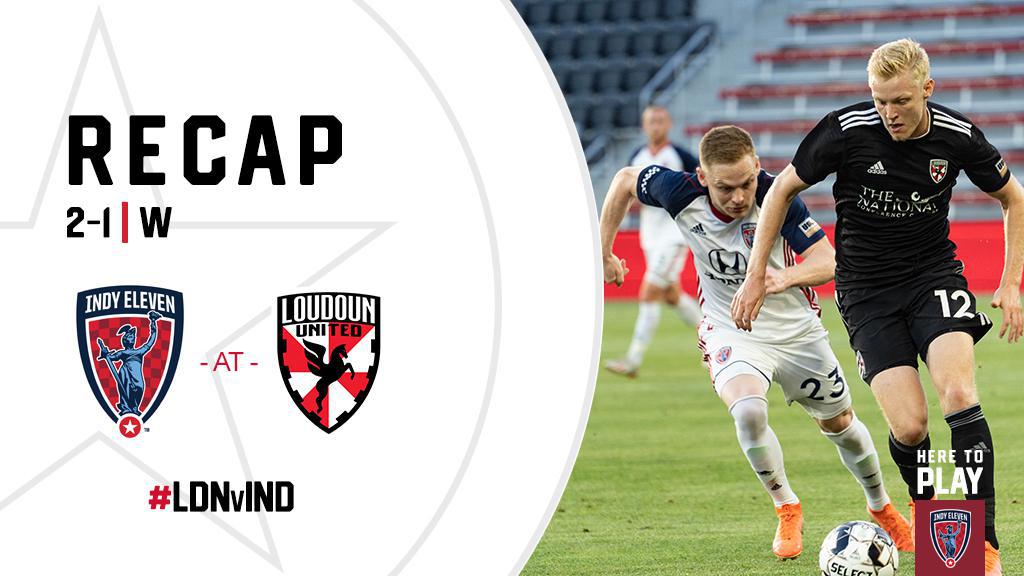 A relentless attack and late-game heroics by midfielder Tyler Pasher proved to be a winning recipe yet again for Indy Eleven, which notched a hard-fought 2-1 road triumph over Loudoun United FC at Audi Field in the nation’s capital. The 89th minute goal by Pasher was his fourth in Indy’s last five USL Championship contests and his third game-winner during that stretch – all coming with less than six minutes remaining in regulation play.

The victory was the third straight for Indy Eleven (8W-2L-3D, 27 pts.), which pushed its undefeated streak to seven games (4W-0L-3D) since May 1. Indiana’s Team also moved into sole possession of second place on the Eastern Conference table and now sits just three points behind the Tampa Bay Rowdies with a pair of games in hand on the leader.

“Tonight’s win felt like it was definitely something that we deserved. We dominated almost the entire game,” said Indy Eleven Head Coach Martin Rennie. “We had 28 shots against Loudoun, 18 of which were inside the box. When we’re that dominant and we’re creating that many chances, we need to put the ball in the net and put a goal on the scoreboard. Thankfully in the end, we did it. Even though it took a while, we got what we deserved.”

While Indy Eleven ultimately dominated the attacking stats on the evening, both sides flashed their prowess towards goal in a wide-open first quarter-hour, the expansive pitch at D.C. United’s new home providing a pristine canvas on which to work. It was Indy’s strike force of Dane Kelly and Thomas Enevoldsen setting up the first two quality chances for each other, Kelly pulling his shot from 15 yards just wide left in the eighth minute and, just 45 seconds later, Enevoldsen sending his low chance from eight yards straight to Loudoun ‘keeper Colin Miller.

Both Miller and his opposite number, Indy Eleven’s Jordan Farr, made their first USL Championship starts in just their second league appearances – the latter stepping into action for regular starter Evan Newton, who was injured in the second half of last weekend’s win at Memphis 901 FC.

While Indy Eleven found most of its danger in the first half on the counter, it was Loudoun United striking pair’s first on a quickly created chance of their own 12 minutes in. Forward Kyle Murphy squared a ball from the left flank for midfielder Andrew Lubahn 40 yards from goal, and one of the few veterans in the Loudoun line-up did the rest, carrying 20 yards before cutting left into space and unleashing a rocket that found the upper right corner to give United an early 1-0 advantage.

Kelly looked to make the deficit short-lived in the 16th minute when he made a lengthy run to get on the end of Pasher’s near-post cross, but a last-ditch sliding challenge by defender Allexon Saravia instead gave Indy a corner. In the 23rd minute United midfielder Orlando Sinclair bolted into the area and tested Farr from a near-angle, but the Indy netminder collected the first of his pair of saves on the evening.

From there it was pretty much one-way traffic for the Boys in Blue for the rest of the half, starting with midfielder Macauley King’s shot from 20 yards off a cleared corner that missed just wide left in the 27th minute. Kelly would see a low shot blocked at the half-hour, and seven minutes later found himself open inside the United area but sent his chance high. On the other end Farr had a nervous moment after a shot by Murphy was deflected by defender Mitch Osmond that left the Eleven netminder stranded, but the ball ultimately floated wide for a Loudoun corner. Indy midfielder Kim Do-heon’s low effort sent right at Miller in stoppage time would be Indy’s ninth shot of the half compared to Loudoun’s three, but it was the home side carrying the lead into the locker room at the break.

The second half picked up where the first left off, Kelly almost punishing a poor clearance by Miller that was sent right to the Jamaican striker at the edge of the area in the 50th minute. However, Miller atoned for his error with a low save on Kelly’s 10-yard blast. It was Enevoldsen’s turn to try Miller in the minutes that followed, first a shot from distance in the 52nd minute and the a cross-turned-shot from a near-impossible angle on the endline in the 56th minute that glanced off the post. Midfielder Kenney Walker’s effort off the ensuing scramble was also sent straight to Miller, and two minutes later Kelly sent an open header off a Pasher cross to the six-yard box wide left, further mounting the frustrations of the Boys in Blue in the final third.

When Enevoldsen’s far post run in the 65th minute ended with a half-chance header on an open goal that floated off target, it seemed the Eleven might not get the break it needed. However, the fortunes would change just a minute later thanks to more effort by Kelly, who worked himself into the right side of the area and past two defenders. After cutting towards the goal. Kelly’s hard shot from 10 yards out deflected off Loudoun defender Nelson Martinez and inside the right post to finally strand Miller and even the scoreboard at ones.

The Eleven’s superior physicality continued to wear down a feisty United side, which flung itself in front of shots to keep Indy mostly at bay for the following twenty-plus minutes, but the defense could only hold on for so long. In the 89th minute, Walker helped create the go-ahead play by winning back-to-back tackles in the middle of the field, the last forcing the ball to Kelly, whose shot from 20 yards was stopped – but spilled – by Miller. In swooped the speedy Pasher, who rounded Miller with his first touch before slotting, as he does, from a tough angle inside the near left post to put the visitors in front down the stretch.

“He’s [Pasher] gotten really fit and has built his confidence,” Rennie said. “He’s been working hard and the fact that he’s scoring goals late in the game is a testament to his fitness and his ability to keep going until the very end.”

Farr’s long-awaited second save came off a 30-yard free kick in stoppage time, his first professional win also the third on the trot Indiana’s Team, which out-shot Loudoun 28-6 (11-3 on goal) on the evening.

After wins on the road the last two weekends, Indy Eleven will look to continue its hot hand at home next Saturday, June 22, when it hosts Atlanta United FC 2 for the first of three games at Lucas Oil Stadium within a week’s time. Kickoff for Grateful Dead Night next Saturday is set for 7:30 p.m., and details on special Grateful Dead themed scarves, posters and shirts and ticket packages are available at indyeleven.com/tickets or by calling 317-685-1100. Tickets beginning at just $15 are also available for the rest of Indy Eleven’s weeklong homestand for games on Wednesday, June 26 (Pride Night versus Birmingham Legion FC) and Saturday, June 29 vs. Louisville City FC.