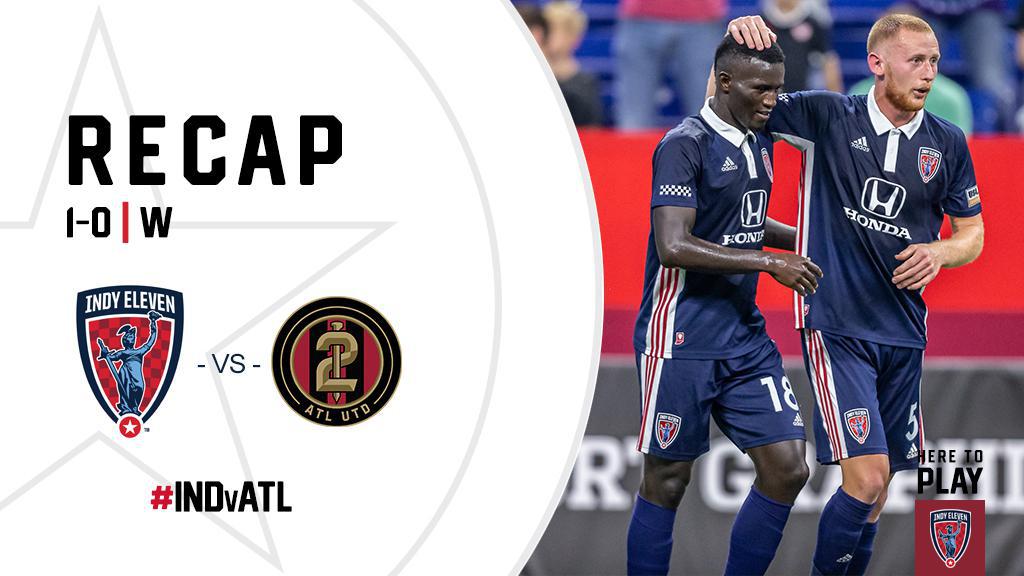 Indy Eleven’s stubborn pattern of settling results late continued tonight – but it also paid off handsomely once again, as substitute forward Alioune Diakhate’s 84th minute goal was all that was needed in a 1-0 defeat of Atlanta United 2 in front of 11,137 at Lucas Oil Stadium.

The goal, Diakhate’s first since signing for Indy Eleven after earning a roster spot via a preseason tryout, helped his side to a fourth straight win and kept the Boys in Blue undefeated in their last eight games (5W-0L-3D) dating back to May 1. The result also moved Indy Eleven’s home unbeaten streak to 15 games (9W-0L-6D), a run at Lucas Oil Stadium spanning nearly a calendar year since last July 7.

“I think it was always going to be a bit of a difficult game tonight because we are coming in against a team that had a bad result last week and that I think is a very talented team and a really well-coached team. We had a couple of good chances but they had chances too,” said Indy Eleven Head Coach Martin Rennie. “I was really proud of the players. They stuck with it, they kept going, and, in the end, they got their fourth win in a row and that was a great result for us and it sends the fans home happy.”

Diakhate’s tally marked the fourth time in its last six games that Indy Eleven got a game-winner in the last 10 minutes of regulation, including each of its last three fixtures at Lucas Oil Stadium. One other trend, a stingy defensive effort, also continued tonight as goalkeeper Jordan Farr collected his first career shutout, and the team’s ninth in 14 games played this season.

“The defenders did their job very well and obviously when we are getting so many clean sheets, it comes down to the whole team doing their job. When you’re defending well, it means that you’re always going to have a chance to win the game and we managed to do that with a great goal,” Rennie said.

Indy Eleven had a golden chance to move the scoreboard just three minutes in when a Tyler Gibson ball over the top and a fantastic first touch by Dane Kelly put the Jamaican striker behind Atlanta’s backline. Kelly ended up 1-v-1 with Atlanta goalkeeper Dylan Castanheira, who came aggressively off his line and went low to block the game’s first shot.

The first yellow card in a chippy opening spell came in the 12th minute, when ATL UTD 2 defender Guillermo Benitez was booked for a late challenge on Eleven midfielder Ayoze, who was introduced into the Indy starting lineup for the first time since May 25 versus Nashville. The tone was set, as hard challenges and pushing and shoving in the minutes to follow was punctuated in the 17th minute by a yellow shown to Indy midfielder Kim Do-heon for a high challenge on Atlanta’s Laurence Wyke in midfield.

The visitors didn’t have a clear cut chance until halfway through the opening stanza with Patrick Okonkwo creating some space for himself and slicing into the left side of the area, but the Atlanta striker scuffed his chance to the far post, allowing Farr to make his first save on one hop. Indy’s next trip down the field saw a dangerous cross at the endline by Tyler Pasher nearly bundled in by Atlanta defender Wesly Decas’ mishit towards goal from inside the six-yard box, but luckily it went right to Castanheira.

Eleven striker Thomas Enevoldsen seemed to have a fair claim for a penalty kick at the half-hour mark when contact by Wyke sent him to ground as he looked to bury a corner kick at the far post, but no call was made. Atlanta quickly countered, and a misplay in defense by the Eleven resulted in Laurent Kissiedou charging in alone on goal. However, a heavy touch allowed Farr to dart off his line and safely gather the loose ball. Atlanta United 2 would begin to find some space on the flanks in the final 10 minutes of the half, but a series of crosses would go without reward, as would Kelly’s header off Pasher’s service to the six that was sent over the bar in the 43rd minute.

It was Atlanta with the better of the chances to start an active second half, Okonkwo’s bicycle attempt bouncing wide of the right post and Farr and Karl Ouimette’s convergence to thwart Kissiedou’s dangerous run keeping things scoreless within the first five minutes. Castanheira did his part to keep it even in the 51st minute, using both hands to punch away Enevoldsen’s 10-yard blast.

Ayoze went looking for his first goal of the season in the 61st minute with a left-footer from 30 yards that flashed just wide of the right post. Atlanta striker Bienvenue Kanakimana was welcomed to the game in the 63rd minute and made a quick impression seven minutes later with a low shot that Farr did well to kick save and send out for a corner. Another substitute, Diakhate, almost made a more immediate impact after entering in the 75th minute, but his takedown inside the area by Florentin Pogba a minute later was deemed fair rather than earning a gesture to the penalty spot. The 80th minute saw end-to-end chances go begging, starting with Wyke’s shot off a 3-on-2 break going straight to Farr, followed by Enevoldsen pouncing on Pogba’s poor back pass inside the area, only to see his shot saved by a scrambling Castanheira.

It’s been Pasher writing Indy’s heroic late-game scripts recently by scoring, but tonight he would play provider, accepting Ayoze’s pinpoint diagonal ball through heavy traffic with his first touch before squaring across goal for Diakhate with his second. With Castanheira rightly guarding his near post, Diakhate’s onside run resulted in the easiest of account openers, his tap in from two yards sending the Brickyard Battalion into a frenzy with their Boys in Blue finally up 1-0.

Diakhate nearly got his second five minutes later with a near-angle shot that hit the outside of the right netting, and Pasher should have earned a penalty after being sent to the ground inside the area by a Pogba forearm in the back in stoppage time, but again the referee swallowed his whistle. It was no matter, as Farr would go untested and Indy ride out four minutes of stoppage time to notch its fourth consecutive victory and keep Atlanta winless in its last nine contests.

“I think there was three or four major blocks by all the back three in Mitch [Osmond], Karl [Ouimette] and Paddy [Barrett]. Add one or two in from Tyler [Gibson] and you got five or six shots that could have been goals that didn’t even get to me,” said Farr, making just his second USL Championship start in spelling the injured Evan Newton. “The team allowed shots that were savable, and as long as we keep getting in front of the tough shots and the ones in the middle, it’s going to make Evan [Newton] and I’s job very easy. The guys in front of me are class.”

Tonight’s match kicked off a busy week at Lucas Oil Stadium for the Boys in Blue, who will host 7:00 p.m. kickoffs this Wednesday, June 26, against Birmingham Legion FC (Pride Night) and next Saturday, June 29, versus regional rival and two-time defending USL Championship title-winner Louisville City FC. Tickets for both contests start at just $15 and are available at indyeleven.com/tickets or by calling 317-685-1100.