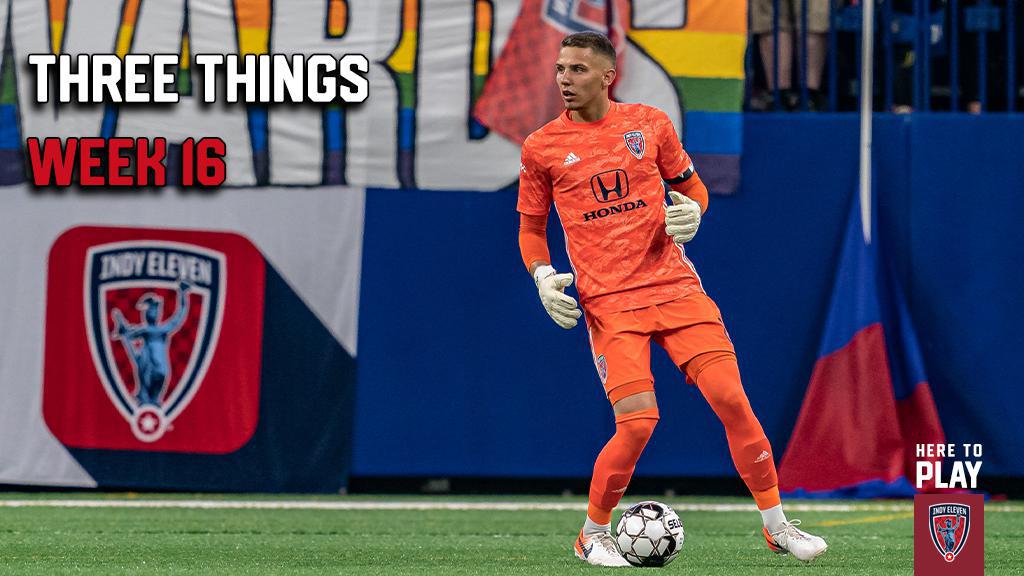 After every game in 2019, IndyEleven.com’s Drew Kamaski will give his three takeaways from the performance of the Boys in Blue. This week's edition comes after Indiana's Team defeated Atlanta United FC 2 1-0 at home in Week 16 USL Championship play.

Depth is a great thing to have. It really is. Depth gives peace of mind to the head coach, to the technical and training staff, and to the fans. For the past 198 minutes of USL Championship play, Indy goalkeeper Jordan Farr has been the one providing peace of mind. Farr has started the last two matches against Loudoun United FC and Atlanta United 2 and played the remaining 18 minutes at Memphis 901 FC that saw starting goalkeeper Evan Newton subbed off.

Since coming on in the 72nd minute against Memphis, Farr has racked up four saves, three clearances (courtesy of his courageousness as a ‘keeper), a clean sheet and allowed one goal (which in Farr’s defense, was about as good a goal as you can allow). The 24-year-old’s performance against Atlanta United 2 solidified Farr’s class, as he recorded three massive saves and his first USL Championship clean sheet.

With Newton upgraded to questionable for last Saturday’s win, Farr’s impressive relief stint may be coming to an end as early as this week. No matter who goes between the posts Wednesday against Birmingham Legion FC and Saturday in the rivalry showdown with Louisville City FC, the Corban University grad (shoutout to Salem, Oregon) knows this – the Boys in Blue, from front to back, will be ready for the challenge.

It has to be a good feeling to score a game-winning goal.

It has to be a great feeling to score a game-winning goal as your first goal for your team.

It has to be a truly exceptional feeling to join a team after attending an open tryout, training hard week-in and week-out, making a few appearances as a substitute, struggling some, and then scoring your first goal for the team in the 84th minute to win the game.

If you missed the game, you missed an exceptional sight. You also missed Diakhate’s Cristiano Ronaldo celebration that had the bench truly gasping for air at not only the emotional immensity of the goal, but the comedic value as well.

After making six appearances totaling 31 minutes across the first three months of the season, Head Coach Martin Rennie has trusted Diakhate with lengthier stints in June, including the last two home contests when he’s looked to ratchet the pressure up to turn draws into wins. The move paid off Saturday with the Senegal native’s first goal of hopefully many – and could result in more minutes during the team’s span of three games in eight days this week.

“You know, here’s someone who paid his own way to come and tryout for us and tonight sends a big crowd of fans home happy, sends the coach home happy, and sends everyone else associated with Indy Eleven home happy,” Rennie said after Saturday’s win. “Here’s a guy who probably didn’t know where Indianapolis was, bought a flight, bought a hotel, came and tried out. People say these tryouts are a waste of time and they’re just a money grab – well Alioune proves that’s not the case.”

Do you know what people say about perfect games? Nothing. They say nothing because if you say something it’s bad luck. Don’t talk when a quarterback hasn’t missed a pass. Don’t talk when a pitcher hasn’t given up a hit. So ideally, I’m going to talk about this as indirectly as possible to avoid bad juju. Last night’s victory brought Indy Eleven’s undefeated streak at home to 15 – a streak that began on July 7 of last year, after a 2-1 victory over Charlotte Independence.

Since then, the Boys in Blue have scored 22 goals and allowed 10, while keeping eight clean sheets. Rennie’s got the squad rolling at Lucas Oil Stadium, chasing a record that began on October 17, 2015 and finished on May 6, 2017. Now, Indiana’s Team is chasing the club record of 20 undefeated home league games that stretched nearly 20 months during the NASL-era from late-2015 through early 2017.

Indy will have the chance to tie the previous streak against the team that the current streak began against in Charlotte Independence on August 25, but the Boys in Blue will first need to get past Birmingham Legion FC, Louisville City FC, Loudoun United FC and Saint Louis FC. A good start would be stretching the streak past a full calendar year with points from this week’s two contests.

It's a busy week ahead at Lucas Oil Stadium for the Boys in Blue, who will host 7:00 p.m. kickoffs this Wednesday, June 26, against Birmingham Legion FC (Pride Night) and Saturday, June 29, versus regional rival and two-time defending USL Championship title-winner Louisville City FC. Tickets for both contests start at just $15 and are available at indyeleven.com/tickets or by calling 317-685-1100.