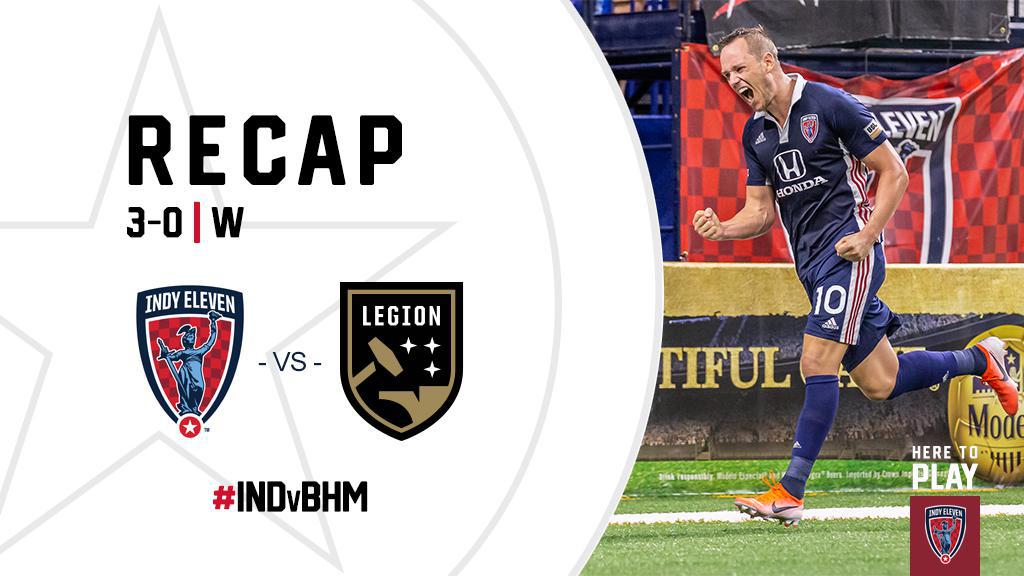 Each of the last three home wins for Indy Eleven have been nail-biters, but tonight the Boys in Blue flipped the script, spreading goals throughout a convincing 3-0 victory over Birmingham Legion FC at Lucas Oil Stadium.

The victory improved the club’s record-winning streak to five games and lifted Indy Eleven (10W-2L-3D, 33 pts.) into a tie for first place in the USL Championship Eastern Conference alongside the Tampa Bay Rowdies. The result also extended the Eleven's undefeated streak to nine games (6W-0L-3D) and its home unbeaten streak at Lucas Oil Stadium dating back to last July to 16 games (10W-0L-6D).

Goals early and late by Tyler Pasher and Thomas Enevoldsen, respectively, bookended a Legion FC own goal. Pasher’s game-winning goal was his fourth game-clincher in Indy's last seven contests and his team-leading sixth tally of the season. Goalkeeper Jordan Farr made four saves en route to his second consecutive clean sheet. Tonight's shutout for Indy Eleven was the tenth in its first 15 games this season, and the seventh in eight home contests in 2019.

“I thought tonight’s performance was solid,” said Indy Eleven Head Coach Martin Rennie. “We scored a really good first goal early. It was nice. We haven’t really done that at all at home. Then we scored a good goal on a set play, which is something we like to see because it’s something we work on a lot. I was pleased with Thomas [Enevoldsen] getting a goal at the end. It was obvious he really wanted one. He and Alioune [Diakhate] linked up well and he got his reward. It was a good performance and as we head towards the midway point in the season, we’re doing well.”

The Boys Blue opened the scoring early when, in the seventh minute, Pasher played a textbook one-two with defender Lucas Farias from the left corner of the 18-yard box. After Pasher retrieved Farias’ return ball, the Canadian took one touch to the Birmingham six-yard box and slotted low and inside the far post. The game’s opening goal continued the hot streak for Pasher, who has scored all of his six goals in the Eleven’s last seven outings.

“We’ve been playing well most of the season. The big thing is just taking our chances and being more clinical, which we were today,” Rennie said. “Everyone on the team are really getting to know each other and work really hard for each other. There is a good chemistry amongst the group and a good culture around the team.

Midfielder Macauley King nearly doubled the lead 14 minutes later, with Pasher nearly creating the goal. After leaving a Birmingham defender behind him, the Canadian played a diagonal pass that found King at the top of the Birmingham box. King would unleash a driven effort that flew just inches over the bar, but surely worried Birmingham ‘keeper Matt VanOekel.

Birmingham had an excellent chance to draw level at the half hour mark after a cross played to the back post found an unmarked Eddie Opoku. Much to Farr’s relief, the Birmingham forward failed to put the would be tap-in on frame, sending the shot into the right side-netting.

Birmingham would live to regret the miss thirteen minutes later, as Indy Eleven would double the lead through an own goal via Legion FC defender Mathieu Laurent. Indy defender Ayoze was tasked with playing in a free kick from 35 yards out, and the Spaniard’s in-swinger would glance off the head of two Birmingham players before ricocheting off the chest of Laurent and into the back of the net, despite a touch from Van Oekel.

The second half began on a less active note, as the first clear chance of the second 45 minutes manifested through a Birmingham cross into the Indy Eleven box in the 57th minute. The cross would find Legion FC’s leading goal scorer, forward Chandler Hoffman, but he was unable to redirect the effort on frame, sending his header wide right.

Farr would be forced into another goal-saving stop at the hour mark – but not from the opposition. Birmingham’s Daniel Johnson played a lofted pass into the box from the right side of the 18-yard box attempting to find Hoffman. Indy defender Mitchell Osmond went to clear the effort acrobatically, but unintentionally redirected the effort towards goal and, luckily, right at an alert Farr. Ten minutes later, Farr would be tested again by the foot of Hoffman. After receiving a pass at the top of the Indy 18, Hoffman took a decisive touch towards the face of goal and drove in a low shot that Farr extended on the ground to gather as the score line remained 2-0.

The game’s last clear cut chance wouldn’t surface until the 91st minute, when Enevoldsen would put some iffy decisions by the center referee in the late stages behind him by putting the nail in Legion FC’s coffin. Forward Alioune Diakhate – making his first start for the Boys in Blue on the evening – would place a shot on frame from inside the box that would be saved by Van Oekel, but the rebound would find the Danish forward creeping at the back post as he killed off the game.

"We’ve had very close wins; 2-1 vs Loudoun and won by one the other night [against Atlanta United FC 2]. It’s been like that for a while now, so it’s good to get a comfortable win,” said Enevoldsen. “The early goal probably helped us a lot, it gave us the confidence to keep going and I think it was by far our best home performance this season.  We were good on the ball, we created good chances and it’s good to say we [have won] five games in a row – that’s a very good streak.”

Indy Eleven’s busy week concludes this Saturday, June 29, with the club’s first “Blue Out” at Lucas Oil Stadium, presented by Blue Indy, against two-time defending USL Championship title holder Louisville City FC. Fans are encouraged to support the “Boys in Blue” by donning blue for the latest edition of the Louisville-Indianapolis Proximity Association Football Contest, which is slated for a 7:00 p.m. kickoff. Tickets remain available for as little as $15 and can be purchased at indyeleven.com/tickets or by calling 317-685-1100.