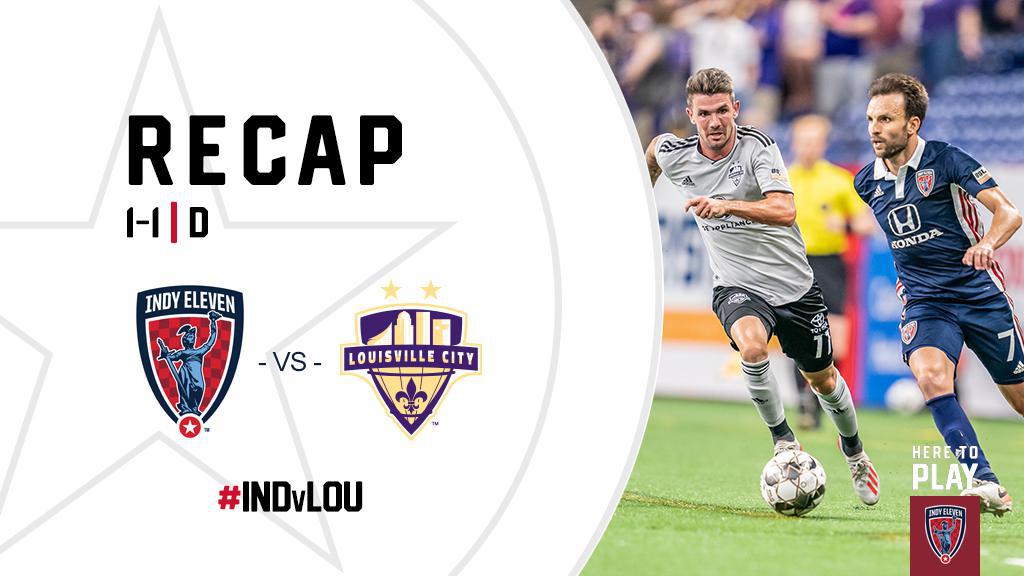 Indy Eleven (10W-2L-4D, 34 pts.) ended a three-game week at home with a hard-fought 1-1 draw against rival Louisville City FC (7W-5L-5D, 26 pts.). With Tampa Bay’s late 2-1 win at home over Ottawa Fury FC, Indy Eleven ended the evening in second place in the USL Championship’s Eastern Conference, now two points behind the Rowdies but with a game in hand.

The match began much like Wednesday night’s win over Birmingham Legion FC, with red-hot striker Tyler Pasher scoring early to give Indy Eleven the lead, this time in the 9th minute. The goal was Pasher’s league-best fifth in the month of June and team-leading seventh of the season. Louisville captain Paolo DelPiccolo would convert one of several LCFC second-half set piece chances in the 55th minute, evening the proceedings and, eventually, giving the Louisville-Indianapolis Proximity Association Football Contest rivals a share of the spoils.

“It’s a good week for us. We picked up seven points out of nine. The third game of the week is always the most challenging in terms of the energy levels,” said Indy Eleven Head Coach Martin Rennie. “Both teams really pressed hard and worked hard, and the passing and movement was good from both sides. I thought both teams put everything into it. It was an exciting game for everyone here.”

The result improved Indy Eleven’s undefeated streak in USL Championship play to 10 games (6W-0L-4D), but it also halted the Eleven’s club-record winning streak at five games. The draw also pushed Indy Eleven’s home undefeated run to 17 games (10W-0L-7D), which will keep the Boys in Blue unbeaten at Lucas Oil Stadium for a full calendar year, the streak starting last July 7 and their next home match coming on July 20 versus Loudoun United FC.

“We have really good chemistry and balance. We’ve managed to maintain it for this spell,” said midfielder and captain Matt Watson. “The results have shown we’re a good team. We’ve got to keep doing it every day because the season is nowhere near over.”

The game’s first chance presented itself in the fifth minute after Indy Eleven forward Alioune Diakhate, making his second consecutive – and career – start, played a through ball for fellow forward Thomas Enevoldsen, who found himself one-on-one with Louisville ‘keeper Chris Hubbard. A daring save off Hubbard’s line resulted in a corner, which found Diakhate back post, the Senegalese striker nearly scoring the game’s opening goal on a half-volley if not for the woodwork coming to the rescue.

Indy continued to press and would be rewarded soon after. A give-and-go featuring Pasher and Enevoldsen freed up Pasher inside the Louisville box. The Canadian took a touch to settle the return ball near the penalty spot and slotted home low past Hubbard, giving the Boys in Blue an early lead once again – this time two minutes later than the advantage Pasher established on a similar play just three nights ago against Birmingham.

In the 16th minute, a quick counter spurred by none other than Pasher nearly resulted in the doubling of the lead. A giveaway by Louisville in the midfield saw Pasher free Diakhate, who then played a diagonal pass to Enevoldsen on the right side of Louisville’s 18-yard box, but the Danish forward sent his effort narrowly wide right. Louisville nearly drew level in the 21st minute after Indy conceded a free kick from the right side of the pitch deep in its own half. The ensuing kick was whipped in by defender Oscar Jimenez, whose in-swinging ball connected with the head of midfielder Magnus Rasmussen, but the effort glanced just shy of the right post.

The match’s electric opening pace would finally settle, the next bit of action coming in the 37th minute when Indy midfielder Kenney Walker’s teed up free kick from the midfield stripe located Diakhate on a slanting run. A one-time half-volley from the right side of the 18 would beat Hubbard, but also beat the goal as well, as a unanimous gasp filled Lucas Oil Stadium.

Four minutes later, Indy goalkeeper Jordan Farr recorded his first save of the night, as he searched for his third clean sheet in a row since taking over for the injured Evan Newton. This time, a Louisville City FC free kick from midfield, again taken by Jimenez, would connect with the head of defender Paco Craig near the Indy penalty spot, but Craig’s effort found the waiting arms of Farr.

While it was Indy who owned the first half, the brutal three-game week caught up with the Boys in Blue and resulted in a more even second stanza, with tired legs resulting in Louisville drawing several dangerous fouls inside the final third. Ten minutes into the half, it was DelPiccolo taking advantage of one of those set piece opportunities, his left-footed strike from just past 25 yards out flying into the top left corner of Farr’s net, leaving the ‘keeper with no chance and equaling the match. The goal was the first concession during the homestand for Indy Eleven, and just the second allowed in eight home games thus far in 2019.

Indiana’s Team nearly regained the lead in the 63rd minute as strike partners Diakhate and Enevoldsen connected for what would’ve been Diakhate’s second goal in as many games. Enevoldsen sprayed in a cross to the back post that found the 25-year-old forward unmarked at the back post, but Diakhate was unable to convert the headed opportunity.

Seven minutes later Louisville again found a chance to capture the lead through a free kick opportunity at the very edge of the Indy 18-yard box. DelPiccolo stood over the ball, but this time his driven effort went straight into the arms of Farr, who didn’t have to move to gather the effort.

Indy’s attack roles reversed in the 75th minute as Diakhate this time played in a ball that would allow Enevoldsen to go on a tearing run through the center of the field. After gathering his touch and fighting off a defender, he nearly tucked away the go-ahead goal if not for another massive one-on-one save by Hubbard inside the Louisville box.

Louisville forward Luke Spencer nearly found the back of the net in the 80th as the two sides continued to trade blows back and forth. A heel flick in the box set up Spencer for a wide-open view of the net, but his left-footed effort failed to test Farr, as another Louisville shot was hit directly into his arms.

Despite a flurry of chances by Louisville in the final ten minutes, the Boys in Blue’s defense held firm. The last chance of the game would fall at the feet of Indy through an Ayoze corner kick, but the Spaniard’s in-swinger would be cleared out easily with the final whistle coming seconds later.

“We had a few chances in the first half where if we would’ve taken more we would’ve made it much more difficult for Louisville,” said Rennie. “It took a special goal to equalize the game. I think we can take a lot from tonight’s performance. I think we’ve won six games out of the last eight games and we’ve not lost a game at home in over a year. We now can get a few days rest and go again.”

The Boys in Blue will take a well-deserved break across the Fourth of July holiday weekend and next see action on Saturday, July 13, when they travel east to meet Hartford Athletic for a 5:00 p.m. kickoff at Dillon Stadium. Indy Eleven will return home the following weekend to close out its season series against another expansion side, Loudoun United FC, at Lucas Oil Stadium at 7:00 p.m. Tickets for the “Night of Champions” match celebrating Indiana Soccer club and IHSAA teams remain available for as little as $15 and can be purchased at indyeleven.com/tickets or by calling 317-685-1100.