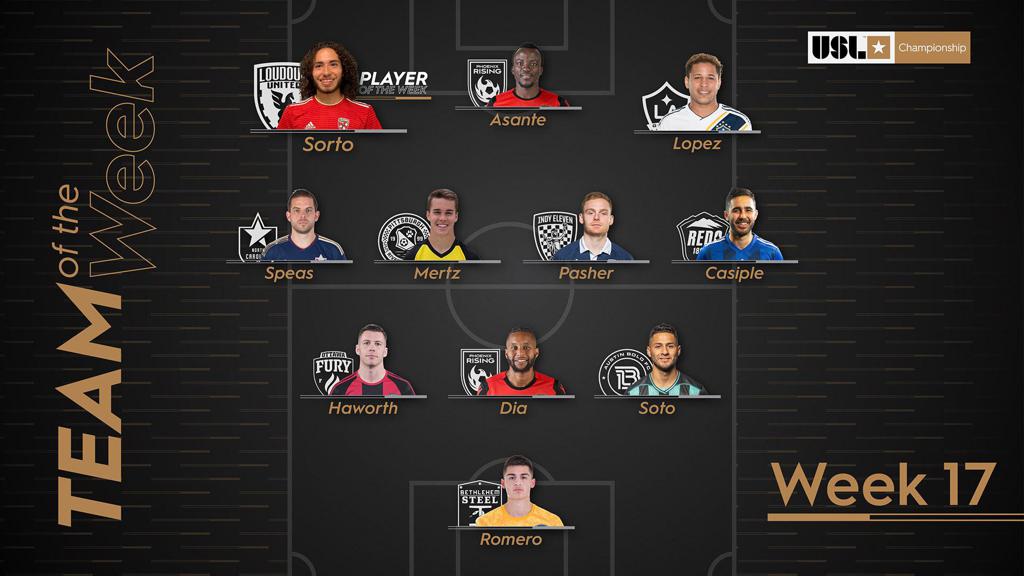 Indy Eleven midfielder Tyler Pasher has been voted to the USL Championship Team of the Week for Week 17 of the 2019 season. Much like his Week 13 and 15 Team of the Week performances, Pasher continues to produce after scoring in both of Indy Eleven’s Week 17 appearances, which saw the team expand its undefeated streak to 10 matches. In addition to extending his scoring tally to a team-best seven on the season, the 25-year-old capped off his Week 17 play by completing 51 of 60 passes to his teammates.

Pasher’s Team of the Week appearance is the ninth time this season a member of Indiana’s Team has made the weekly cut and the third for the left-sided winger since his Week 13 honor. Kenney Walker (Week 2), Ayoze Garcia (Week 4, 11), Dane Kelly (Week 7; Player of the Week) and Evan Newton (Week 9; Player of the Week) and Neveal Hackshaw (Week 12) have earned spots in Team of the Week lineups so far this season. Pasher has also earned honorable mentions on the TotW “bench” for his performances in Week 7 and 11.

Pasher’s speed along the left side of the pitch and accuracy have been a flagship piece of Eleven head coach Martin Rennie’s system in 2019, during which he has completed just over 81 percent of his 384 passes and has played in the third most key passes (21) to his teammates. The Canadian’s tenacity on the ball has allowed him to weave into scoring positions and finish with an unusual accuracy, having put 14 of his 18 shots on target – and seven of those shots ending up in the back of the net, placing him tied for 4th place on the Eastern Conference’s Golden Boot chart.

The Boys in Blue will take a well-deserved break across the Fourth of July holiday weekend and next see action on Saturday, July 13, when they travel east to meet Hartford Athletic for a 5:00 p.m. kickoff at Dillon Stadium. Indy Eleven will return home the following weekend to close out its season series against another expansion side, Loudoun United FC, at Lucas Oil Stadium at 7:00 p.m. Tickets for the “Night of Champions” match celebrating Indiana Soccer club and IHSAA teams remain available for as little as $15 and can be purchased at indyeleven.com/tickets or by calling 317-685-1100.

D – Carl Haworth, Ottawa Fury FC: Haworth had two goals and one assist as Fury FC took a 3-2 victory against the Charleston Battery to remain strongly in the Eastern Conference postseason chase.

D – Amadou Dia, Phoenix Rising FC: Dia scored a pair of goals – including a stoppage-time game-winner – as Rising FC rallied for a 4-2 victory against the Portland Timbers 2 on Saturday night.

D – Josue Soto, Austin Bold FC: Soto recorded a pair of assists, completed 25 of 29 passes and made two recoveries and three clearances in Bold FC’s victory against the Switchbacks on Saturday night.

M – Robbie Mertz, Pittsburgh Riverhounds SC: Mertz scored a pair of goals to lead the Hounds to a 4-1 victory against Birmingham Legion FC that extended the club’s winning streak to three games.

M – Tyler Pasher, Indy Eleven: Pasher scored in both of Indy’s contests in the past week, including the opener in a 3-0 win against Birmingham Legion FC, and completed 51 of 60 passes overall across both games.

M – Seth Casiple, Reno 1868 FC: Casiple had a goal and assist as Reno took victories on the road in Portland and at home against Sacramento while also recording eight key passes and 19 recoveries across the two games.

F – Christian Sorto, Loudoun United FC: Sorto scored a pair of goals on his professional debut, completed 8 of 10 passes and won 5 of 6 duels after coming on as a substitute in Loudoun’s 2-1 victory on Friday night against ATL UTD 2.