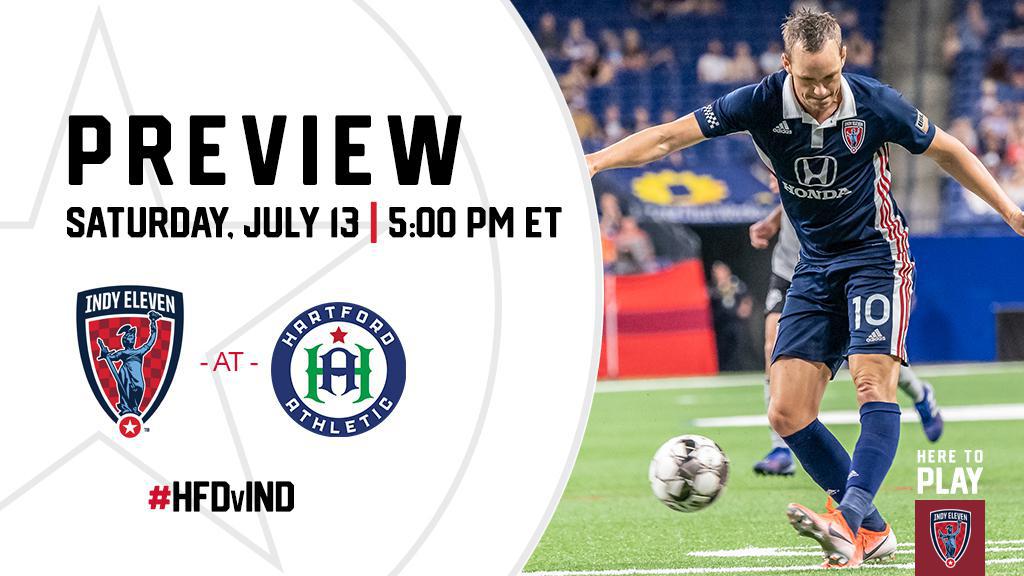 In the first-ever meeting between the two sides, a 40th minute own goal off of Nikolaj Lyngo resulted in a home-opening win for the Boys in Blue, played in front of 20,251 fans at Lucas Oil Stadium. The clean sheet by Evan Newton marked the first 90 minutes of what would eventually be a 465-minute shutout streak to start Indy’s home campaign in 2019 (5+ games).

Indy Eleven claimed a point from the first of two 2019 Louisville-Indianapolis Proximity Association Football Contest (LIPAFC) matchups against the defending USL Cup champions. Midfielder Tyler Pasher scored the game’s first goal in the 9th minute, notching his seventh of the season and fifth in the month of June. Louisville leveled the score in the 55th minute after Paolo DelPiccolo’s Goal of the Week winning free kick found the back of Indy’s net.

Hartford Athletic lost their second match in a row and 12th of the 2019 USL Championship season after falling to Memphis 901 FC, 4-1. The Connecticut based side fell by three goals for the second game in a row after falling to Birmingham Legion 0-3 at home the week prior. Midfielder Mads Jorgenson scored Hartford’s only goal and his first of the season in the in the 30th minute, but it wasn’t enough to fend off former Indy Eleven forward Elliot Collier’s hat trick and substitute Lagos Kunga’s 80th minute strike.

Minutes came few and far between at the start of the season, but Osmond made the most of his recent six-match stint in the starting XI, which largely coincided with Neveal Hackshaw’s national team duties with Trinidad & Tobago. In the last 540 minutes of regular season play, the 25-year-old has accumulated 16 tackles, 17 clearances and 15 interceptions. Additionally, the University of Rio Grande graduate has completed over 85 percent of his passes on the season, created two chances on goal and has put his single shot on frame. But perhaps the most important number regarding Osmond is 0.50 – that’s the number of goals allowed per game with Osmond on the backline, the team conceding just thrice during his six June starts.

Swartz has been potent in front of goal for Hartford Athletic during his 10 appearances for the club. The 23-year-old has scored three goals for Hartford throughout the month of June, leaving him tied with forward Jose Angulo as the team’s leading goal scorer nearly halfway through the club’s inaugural season.

The Massachusetts-born midfielder boasts an incredible conversion rate at 43 percent, scoring all of his goals within the first 30 minutes of the match. The objective will be to keep Swartz from finding space within Indy’s penalty area, as the scorer has scored his trio of goals from inside the opposition’s 18-yard box.

If defense wins championships, then Hartford Athletic is in trouble. The club currently finds themselves at the bottom of the Eastern Conference table, having conceded the most goals in the Eastern Conference and the second most across the league at 41. Hartford’s defense has allowed 13 goals in their last five matches played, which can only spell good news for Indy Eleven forward Thomas Enevoldsen.

The Dane is tied with striking partner Dane Kelly for second most goals scored at four through Indy’s first 16 games, but his impact isn’t just felt from the back of the net – he’s equally as adept at creating attacking danger as well. The 31-year-old has created the most goal scoring chances of anyone on Indy Eleven’s roster with 37 key passes, tied for sixth most chances in the Eastern Conference. During the most recent three-game-in-seven-day stretch, the Danish striker accounted for two goals after scoring against Birmingham Legion (June 26) and assisting on Tyler Pasher’s first-half goal against Louisville City FC (June 29). Enevoldsen and the rest of the Indy attacking corps will be chomping at the bit heading into the fixture against a porous Hartford defense.

Don't miss out on the Boys in Blue's return to USL Championship play this Saturday at 5:00 p.m. ET when they head off to Hartford Athletic. Catch all the action live via ESPN+ or follow along on the Indy Eleven Live Twitter feed, presented by Honda.