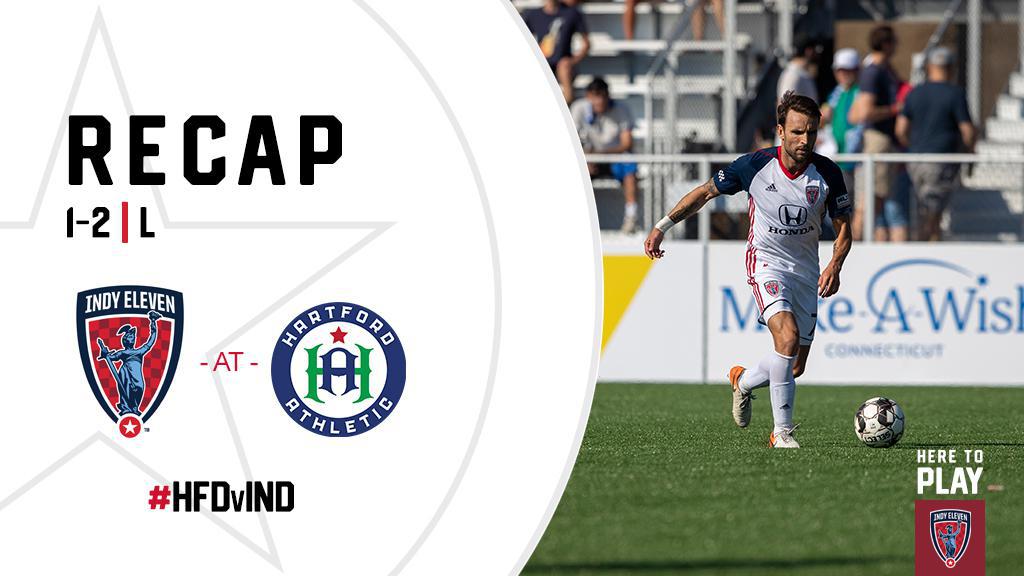 Indy Eleven (10W-3L-4D, 34 pts.) fell after a 14-day break from USL Championship play via a 1-2 loss against Hartford Athletic (3W-12L-4D, 13 pts.). The loss sees Indiana’s Team drop to the third rung on the Eastern Conference ladder, trailing behind New York Red Bulls II by three points and with two games in hand on the current second-place holder.

The goals came late in the match and in favor of the home team when Hartford forward Jose Angulo found the back of net in the 58th minute, followed by former Boys in Blue striker Wojciech Wojcik’s 72nd minute goal from close range. Eleven defender Ayoze managed to pull one back from the spot in the 88th minute after a penalty was awarded, but it wasn’t enough to level the score through the final minutes.

“We were quite proactive in the game, trying to be on the ball and trying to create chances,” said Indy Eleven Head Coach Martin Rennie. “It was probably a game that suited the team that was more defensive-minded. The first goal was important in the game and Hartford got that, which meant we had to open up even more to try and get the equalizer, and that left us a little bit more open.”

“The guys showed great determination and fought right until the very end,” said Rennie. “We ended up getting a goal back and it looked like we might even get that equalizer. It was certainly disappointing not to get something out of the game because there were lots of things that we did well. In the end, we walked into a difficult situation and we feel like we should’ve done a little bit better.”

It was Indy Eleven that had the game’s first chance in the fourth minute after forward Thomas Enevoldsen’s pass through the top of Hartford’s 18-yard box found striking partner Dane Kelly for a one-on-one battle with Hartford ‘keeper Frederik Due. Not far off his line, Due quickly tucked down to deflect the shot off the side of his knee, resulting in the first corner kick of the evening.

Indy continued to press around Hartford’s penalty box with a flurry of back-to-back passes between several Boys in Blue as the match edged into the seventh minute. By the quarter-hour mark, Indy’s heavy offensive presence earned them five early corner kicks, an opportunity that Hartford didn’t see until the 22nd minute.

Indy’s attack-heavy endeavors continued in the 28th minute when Enevoldsen sent a rocket of a shot towards Hartford’s goal from 20 yards out, ending a short distance later when the ball deflected back off the head of Philip Rasmussen. As the clock turned over to the next minute, Enevoldsen lashed another hit towards Hartford’s net after finding himself on the receiving end of a quick pass from King, but the ball took an awkward skip wide for Due to calmly collect. The Dane had one more look at goal before the halftime whistle, midfielder Tyler Gibson laid off a short pass to the upper left corner of Hartford’s box for a defender-splitting shot towards the left post. Enevoldsen’s hit was well-struck, but wasn’t enough to force its way past Due for the lead.

Hartford retaliated seconds after Enevoldsen’s attempt, forward Danny Barrera squared a pass to Wojcik at the top of Indy’s box for a low, chance on frame. Goalkeeper Evan Newton, who returned to the starting lineup for the first time since June 8, dipped and fell on top of the ball, quickly tossing it back up the pitch.

While it was Indy who owned the first half, the heat stunted the Boys in Blue’s restart and resulted in Hartford’s offensive rebound, likely fueled by the home side’s electric crowd. Midfielder Hugh Alexander Dixon sparked the attack that would eventually lead to Hartford’s first goal. In the 56th minute, a through ball from Barrera found Dixon behind Indy’s backline, leading to a shot that smacked the crossbar. Angulo followed up seconds afterwards with another shot that ended to the right of the far post, but returned two minutes later to sneak a low strike around Newton and into the back-right of the net to open the scoring.

The sun continued to beat down on the pitch and slowed the play for both clubs, but despite the conditions, Hartford managed to net once again. In the 72nd minute, Barrera found Wojcik skidding through the top of Indy’s box with a short lateral pass. Taking the ball quickly off his left foot and firing with his right, Wojcik sent his shot over Newton’s diving reach and into the upper right corner of the net.

Battling to find the scoreboard, Indy managed to pull one back by way of a penalty awarded in the 87th minute. Substitute midfielder Tyler Pasher’s lofty ball across the face of Hartford’s goal was swatted down by one of the home players, prompting the match official to immediately point to the spot. Ayoze hustled into position and put his first goal of the season past Due as the clocked ticked over to the 88th minute. Though the chance to walk away with a positive result suddenly seemed hopeful with an additional five minutes of stoppage time added to the match, the time expired before Indiana’s Team could find the equalizer.

The guys will go on from the loss and do well from this point,” said Rennie. “It’s disappointing today, but when you put it in perspective, there’s a lot of things that we’re doing well and there’s plenty we can build on. We’re in a great position near the top of the league, so we just need to learn from this, put it behind us and move on.”

Indy Eleven will return home next Saturday to close out its season series against another expansion side, Loudoun United FC, at Lucas Oil Stadium at 7:00 p.m. Tickets for the “Night of Champions” match celebrating Indiana Soccer club and IHSAA teams remain available for as little as $15 and can be purchased at indyeleven.com/tickets or by calling 317-685-1100.