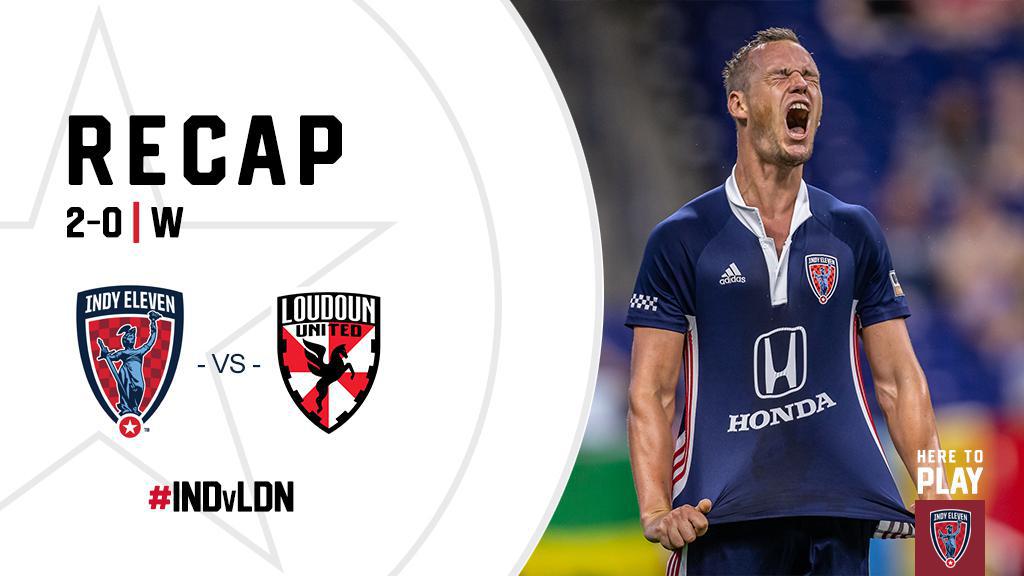 Indy Eleven's habit of leaving results to be settled late may cause its share of nervous moments, but it has been mighty effective. Tonight's latest case study in patience paying off came via a 2-0 victory over Loudoun United FC, with tallies by Thomas Enevoldsen (81') and Tyler Pasher (90+1') sending 11,059 fans home happy from Lucas Oil Stadium.

In Indy Eleven’s last five wins at home dating back to mid-May, four have come via goals scored in the 81st minute or later. In addition, the Boys in Blue added a late-game winner on the road last month – on June 15 against the same Loudoun United FC side it defeated tonight.

“It was a good game for us, it was very tight until the end,” said Indy Eleven head coach Martin Rennie. “We had to be patient and keep going, but that’s a good win for us. Every win is hard to get, and this was no different.”

Much of that success has come due to defense, and tonight was no different, with Indy Eleven becoming the first USL Championship side to post 10 shutouts on the season, Evan Newton collecting his seventh clean sheet of the campaign courtesy of four saves.

The first two chances of quality presented themselves in similar fashion from 30 yards out, shots from nearly thirty yards out by Indy Eleven defender Ayoze and Loudoun midfielder Antonio Bustamante in the 11th and 12th minutes, respectively, both glancing inches over the frame of goal. Minutes later, Ayoze freed the in-form Pasher down the left flank with a lofted ball from midfield. Pasher took an extended touch into the Loudoun 18-yard box before rifling in a low cross from the left that forced Loudoun United FC goalkeeper Earl Edwards Jr. into a parried defense.

Enevoldsen would get his first look at goal in the 28th minute after being played into the Loudoun 18 by a Tyler Gibson through ball. The Danish striker’s effort towards the bottom right corner was saved by Edwards Jr. and pushed away from danger.

Indy Eleven forward Ilija Ilic, who returned the starting XI for the first time since the season opener against Saint Louis FC on March 9, nearly opened the scoring in the 41st minute. The last action of the first half ensued as the Serbian dribbled into the area as far as the Loudoun six-yard box before his attempt ricocheted off Edwards Jr. at his left post, keeping the score level at zero going into the locker rooms.

The first two chances of the second half came to the visitors, but a pair of saves from Newton in the 49th and 51st minutes helped keep the Boys in Blue even. Indiana’s Team would fight back with a pair of chances back to back, first in the 57th minute as midfielder Kenney Walker played Enevoldsen in with a header from just outside Loudoun’s penalty area. The ball would glide over Loudoun’s center backs finding Enevoldsen open from the right side of the six, but his half-volley was pushed away by Edwards Jr. The second came two minutes later when defender Paddy Barrett played Enevoldsen past the pushed up United backline, but his chipped attempt carried well over the bar, sending the striker into a stern conversation with himself about the golden chance gone missing.

Substitute Dane Kelly nearly changed the scoreline in favor of the Boys in Blue in the 75th minute after a through ball from Pasher in the middle of the park found him in space. The Jamaican’s first touch came from the left side of the Loudoun box with his next touch unleashing a shot that would again force Edwards Jr. into a save as the scores remained level. Four minutes later, Loudoun’s Christian Sorto found himself on a tearing run down the left flank before cutting in and having an effort with his right foot, but his low shot was saved by Newton.

Sorto would live to regret the missed chance, as Enevoldsen would capitalize in the 81st minute. A quick chain of passes up the middle starting with Walker finding Kelly and the Jamaican deftly flicking on put Enevoldsen one-on-one with Edwards Jr. near the penalty spot. Enevoldsen’s  shot snuck between the goalkeeper’s legs, finally putting Indy front and giving the Danish forward his fifth tally of the season, now second on the squad behind Pasher.

“I think one of the things that helped us was that Dane [Kelly] came on fresh and helped us stretch the opposition. Once he came on we had quite a lot of chances. We had quite a few chances we missed beforehand,” Rennie said. “That was one that bounced around a bit and I’m quite glad for Thomas [Enevoldsen] because he was in a good position a lot tonight.”

Speaking of, ten minutes later it was the red hot Pasher sealing the game for Indiana’s Team with his eighth goal of 2019. Ayoze would play Pasher into space with a lofted ball from midfield, and after taking two lengthy touches into space Pasher found himself with only Edwards Jr. in front of him. The Canadian, just as Enevoldsen did, would go “5-hole” on the netminder, following with a jog to the corner flag in celebration of a 2-0 victory that extended Indy’s home dominance over the past year.

The Boys in Blue have taken care of business against expansion teams so far this season, gaining 15 of a possible 18 points against USL Championship newcomers via five wins in six such games against Loudoun, Hartford Athletic, Memphis 901 FC and Birmingham Legion FC.