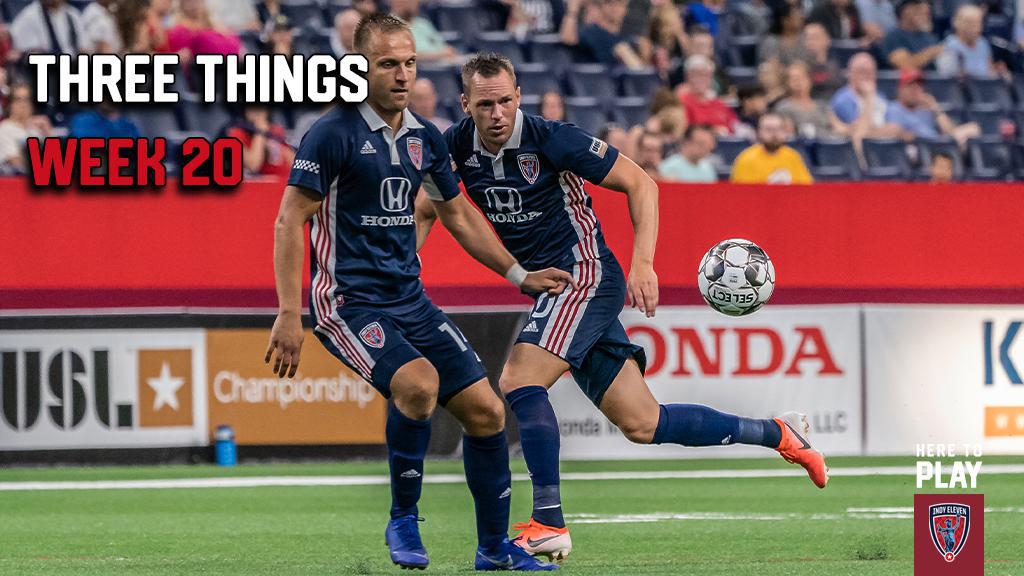 After every game in 2019, IndyEleven.com’s Drew Kamaski will give his three takeaways from the performance of the Boys in Blue. This week's edition comes after Indiana's Team's 2-0 victory vs. Loudoun United FC in Week 20 USL Championship play.

The Boys in Blue have taken a liking to scoring goals in the second half over the last two months. In June, Indiana’s Team tallied nine of its 12 goals within the second stanza of each match. The trend has rolled through July as well, as all three of Indy’s goals have come in the latter half of matches, adding a bit of entertaining drama to the team’s recent run.

The first second-half goal this month came through a penalty at the death, finished by Ayoze in the team’s first visit to Hartford Athletic on July 13. Late-goals two and three came in last Saturday’s 2-0 home win against Loudoun United FC, Thomas Enevoldsen opened the game’s scoring in the 81st minute, followed by Tyler Pasher’s devastating nutmeg goal that sealed victory 10 minutes later in stoppage time with his eighth goal of the season. The Boys in Blue will aim to continue the form in front of net at Nashville SC and North Carolina FC over the next two weeks, after playing to scoreless draws in the first meetings of 2019.

If we’re looking at stellar second-half performances, look no further than Dane Kelly’s 23 minutes against Loudoun United FC. The Jamaican’s impact was felt almost immediately after nearly breaking the deadlock eight minutes into his late-game appearance, a through ball from Pasher freed Kelly for a one-on-one from the left side of the box, but his effort was pushed wide.

Kelly left his mark on the match via an assist six minutes later. The 28-year-old’s perfectly weighted one-touch pass into Loudoun’s penalty area created space for Enevoldsen to tuck a shot down middle and between the wickets of Loudoun’s ‘keeper, handing the Boys in Blue the lead. He might not have scored the goal, but his ability to read Loudoun’s defense and vision to play the pass crafted the opportunity.

“I think one of the things that helped us was Dane [Kelly] came on fresh and helped us stretch the opposition,” Head Coach Martin Rennie said. “Once he came on we had quite a lot of chances.”

The 2-0 victory over Loudoun United FC marked goalkeeper Evan Newton’s seventh clean sheet of the 2019 campaign and his first since returning from a groin injury that sidelined him a month. Newton recorded four saves in the team’s eighth shutout at home this season. Last season’s Golden Glove winner has recorded all but two of those eight home clean sheets, with Jordan Farr laying claim to the outliers against Atlanta United 2 and Birmingham Legion FC.

The team’s strength at home has come through the stellar play of the back three in the 3-4-3 formation coach Rennie has deployed this season. The Scotsman’s squad has allowed just two goals in 10 home matches, boasting the lowest goals allowed tally in the entirety of the league (12) after Tampa Bay Rowdies conceded its 13th on the season against Saint Louis FC last Saturday.

“It’s always good to get a clean sheet and the guys in front have done a good job,” Newton said. “You have to keep pushing and I’m confident with everyone on this team and whoever’s in front.”