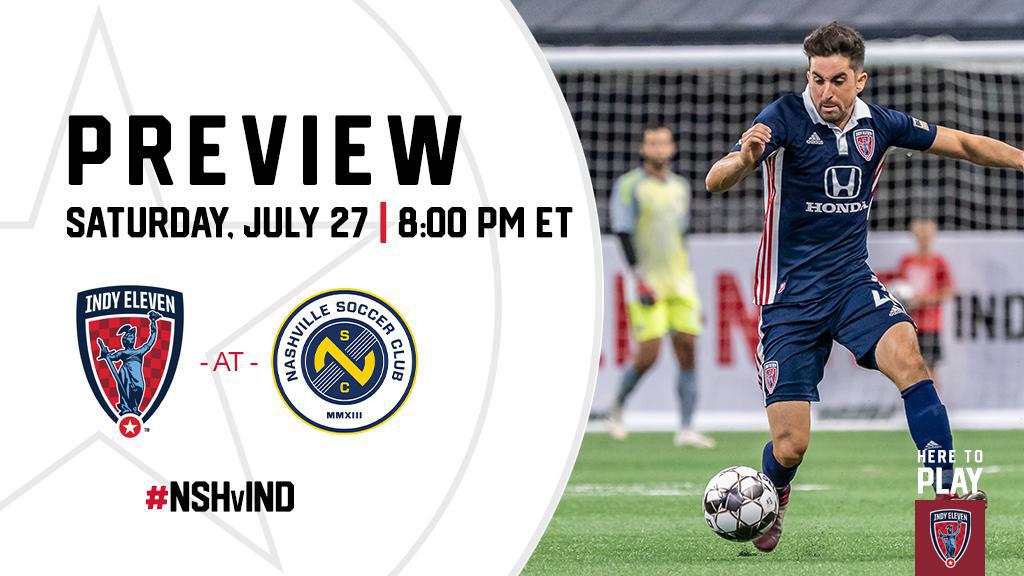 The Boys in Blue shared points with Nashville SC the last time the two teams faced each other on Indy 500 Weekend in Indy. Goalkeeper Evan Newton recorded his fifth consecutive home clean sheet after stopping a Nashville side that didn’t start either star striker in Cameron Lancaster or Daniel Rios. The best chance of the game came early in the 15th minute, after a through ball freed Nashville forward Tucker Hume for a one-on-one opportunity just outside the Indy six-yard-box, but Newton, quick off his line, nullified the goal scoring chance and saved a point for Indiana’s Team.

Goals from defender Jimmy Ockford and leading goal scorer Daniel Rios saw Nashville SC edge out Memphis in the Tennessee rivals’ second and final meeting of the 2019 USL Championship regular season. The second fixture featured the same exact score line as the first, played back on April 13. The clean sheet was Nashville’s seventh this year, ranking tied for fifth across the 36-team Championship and trailing Indy’s league-best mark by three. The clean sheet is also the fifth time in 2019 that Nashville goalkeeper Matt Pickens has kept the goose egg from cracking.

The man who’s been on the pitch the most for Indy Eleven is forward Thomas Enevoldsen, as the native of Denmark has started every one of Indy’s 18 games and played all but three minutes of those starts. The tenacious forward has racked up five goals along the way – and his

Despite being denied scoring opportunities throughout the season – and refreshingly wearing his frustrations and emotion on his sleeves – the Dane never stops making runs into the box and putting himself in the right positions to score as he showed against Birmingham Legion FC with a 91st minute goal last month and against Loudoun United FC on Saturday with an 81st minute goal. Enevoldsen also plays more than a nine role for his club. He’s not afraid to help create chances for teammates as a 10, as he leads Indy Eleven in chances created with 41, two of which have resulted in assists.

Neither influential striker Cameron Lancaster or Daniel Rios started for Nashville SC the last time the side traveled to Lucas Oil Stadium to face the Boys in Blue, most likely the result of playing 90 minutes against Birmingham Legion three days before. Failing to start against the Boys in Blue on May 25 is the only game this season that Rios hasn’t started of his 19 appearances.

In that time, the Mexican has scored 12 goals, seeing him tied for the leading goal scorer honor in the Eastern Conference and tied for second in the Championship’s Golden Boot race. The 24-year-old has been potent recently, having scored four goals in his last five outings. Expect Rios to attempt to land a shot on goal this go around against Indiana’s Team, after failing to take a single shot in the 13 minutes he played off the bench on May 25.

If coaches Martin Rennie and Gary Smith were choosing teams for a pickup street soccer game and had their pick of the Championship’s solid selection of “number sixes” to hold down the middle third, they’d likely stand pat with Gibson and LaGrassa, respectively.

Both midfielders encapsulate what it means to be a box-to-box, do the dirty work that goes unnoticed, holding midfielder. For starters, both midfielders have incredible engines. Gibson has started every match of Indy’s 18 games played and has played all but six minutes of those appearances, being subbed off one time to avoid injury. On the other hand, LaGrassa has started all but two of Nashville’s 19 fixtures, failing to play only 40 minutes of his 17 starts. Each trail only a forward in minutes played on their respective squads – Gibson trails Enevoldsen by three minutes and LaGrassa to Rios by 62 minutes.

The pair are excellent defensively, each leading their team in interceptions. The 28-year-old Gibson has racked up 20 interceptions and LaGrassa 25, a fifth of which came against Indy Eleven in May. Each also leads their team in passes played, as Gibson has played 968 passes to LaGrassa’s 771. The one area that Gibson has a slight edge over 26-year-old LaGrassa is passing accuracy, which he displayed in the first meeting against Nashville where he averaged 94 percent pass completion while LaGrassa completed 77 percent. Gibson – a native of Knoxville, Tenn. – boasts an average 89 percent passing accuracy this season as opposed to LaGrassa’s 79 percent. Look for these two to boss the midfield and butt heads on more than one occasion come Saturday night.