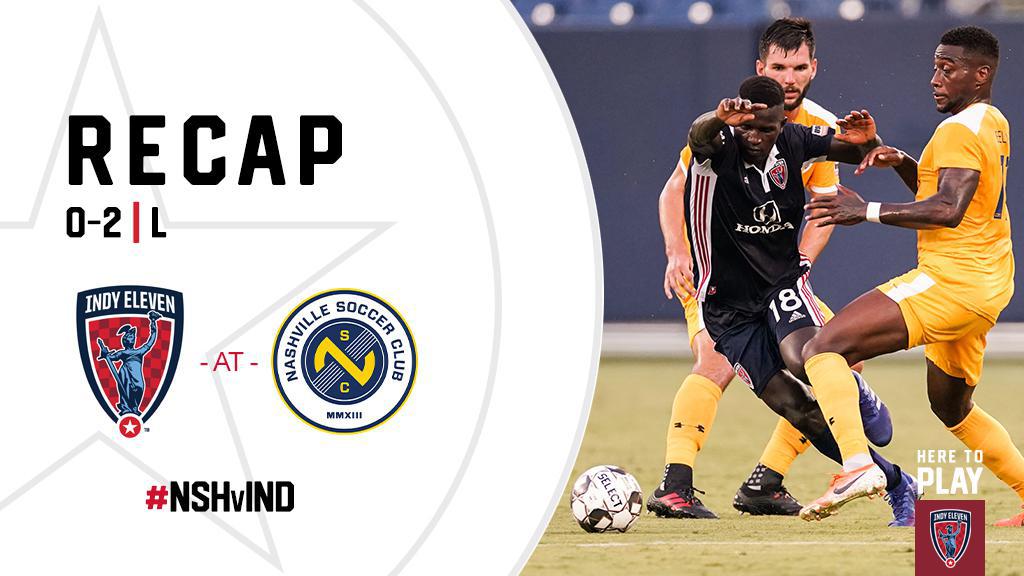 In a marquee USL Championship Eastern Conference match-up, Indy Eleven could not overcome a pair of first half concessions to Nashville SC, those goals marking all the scoring in a 2-0 defeat at Nissan Stadium. Indy Eleven goalkeeper Evan Newton made four big saves on the evening, but his opposite number Matt Pickens made the same number while keeping the Boys in Blue off the scoreboard.

Indy Eleven (11W-4L-4D, 37 pts.) would stay in third place on the Eastern Conference table regardless of tonight’s result, but the loss allowed next weekend’s opposition, North Carolina FC, to pull even in the standings. With the victory, Nashville SC (10W-5L-5L, 35 pts.) drew within a game of the Boys in Blue, who hold a game in hand on the Music City side and two games on North Carolina FC, second-place New York Red Bulls II (41 pts.) and the East-leading Tampa Bay Rowdies (43 pts.).

“That was one of the first games where I feel the performance wasn’t to a level that I would expect. I especially don’t think that we played our best game in the first half,” said Indy Eleven Head Coach Martin Rennie. “We’re in good form, generally speaking, but I do think we need to pick it up when it comes to our performances on the road based on the last two times out, and I think the players are aware of that.”

Indy Eleven came out not wanting to absorb pressure, but it did so effectively, Nashville SC carrying the vast majority of possession without creating any dangerous chances early on. In fact, it was the visitors capturing the first shot on goal near the quarter-hour mark through forward Alioune Diakhate, who forced a kick save out of Pickens after being sprung behind the backline by Tyler Pasher’s through ball from the midfield stripe.

It was Nashville midfielder Lebo Moloto’s marauding 60-yard run down the left flank that finally broke down Indy’s defensive ranks in the 20th minute. Moloto’s square ball found forward Daniel Rios at the top of the box, but his shot seeking the lower left corner streaked wide. However, Rios wouldn’t miss his second opportunity just three minutes later, the Eastern Conference’s leading scorer upping his tally to 13 goals on the season when he received a return pass from midfielder Michael Reed and first-timed past Newton to give Nashville the lead.

“We had a great chance to score early when Matt Pickens made the save against Alioune, and that was a big moment in the game,” explained Rennie. “When you’re playing, I’ll say, higher level games, I think those moments are quite important. Then minutes later they score on a break when we were on the ball, which is disappointing.”

Pasher nearly leveled quickly in the 26th minute when forward Thomas Enevoldsen found him with a pocket of space 10 yards from goal, but center back Jimmy Ockford swept over in time to block the effort that had eyes for the far post. In the 34th minute, it was Eleven midfielder Lucas Farias cutting inside and past a defender to get into the area, but his left-footed shot would not catch Pickens napping at his left post.

The Boys in Blue had controlled the action in the aftermath of Nashville’s opener, but the home side would regain momentum with a goal against the run of play in the 42nd minute through Alan Winn. After running onto Moloto’s through ball up the right flank, Winn had time and space to cut inside before smashing a low shot from 10 yards that snuck inside the near post, doubling Nashville’s advantage minutes before the halftime break.

Indy Eleven began the second half with one substitution – Dane Kelly entering up top for Diakhate – and one ejection, as Head Coach Martin Rennie was dismissed by referee Elvis Osmanovic during the interval. Indy’s energy was high in response, but it was Winn who nabbed the first shot on frame of the second stanza, his low effort in the 51st minute gathered well by Newton. Five minutes later, it was Pickens responding, doing well to scoop defender Paddy Barrett’s close-range header off the goal line and wide of the right post.

Winn was pushing the action after the hour mark, creating chance after chance for the home side; however, Newton was there at every turn to keep Indy close, starting with a save on Winn’s low effort in the 66th minute. The Nashville midfielder then played provider on two dangerous chances for Kharlton Belmar inside the area, but Newton produced a Save-of-the-Week-caliber stop at his near post in the 68th minute, followed by a tip save three minutes later to send an effort from 15 yards over the bar.

Nashville’s numbers behind the ball largely stunted Indy’s attack across the final 20 minutes, but an Enevoldsen header in the 90th minute put Pickens to the test one more time – and one last time the veteran netminder was up to the task. The clean sheet by Pickens matched his effort in the two teams’ 0-0 stalemate at Lucas Oil Stadium back on May 25 – which was also the last time the Boys in Blue were shut out, tonight’s match ending a season-long eight-game scoring streak for Indiana’s Team.

“In the second half I thought we played well, took the game to Nashville a little bit. We were on top and looked more like ourselves,” said Rennie.

The road gets no easier – or less meaningful – for Indy Eleven, which travels to the Tarheel State next Saturday, August 3, to face North Carolina FC in a battle for sole possession of third place in an increasingly crowded Eastern Conference race to the top. Kickoff at Sahlen’s Stadium in Cary, N.C., is set for 7:00 p.m. ET for a match that can be viewed live on WISH-TV and streamed online via ESPN+.