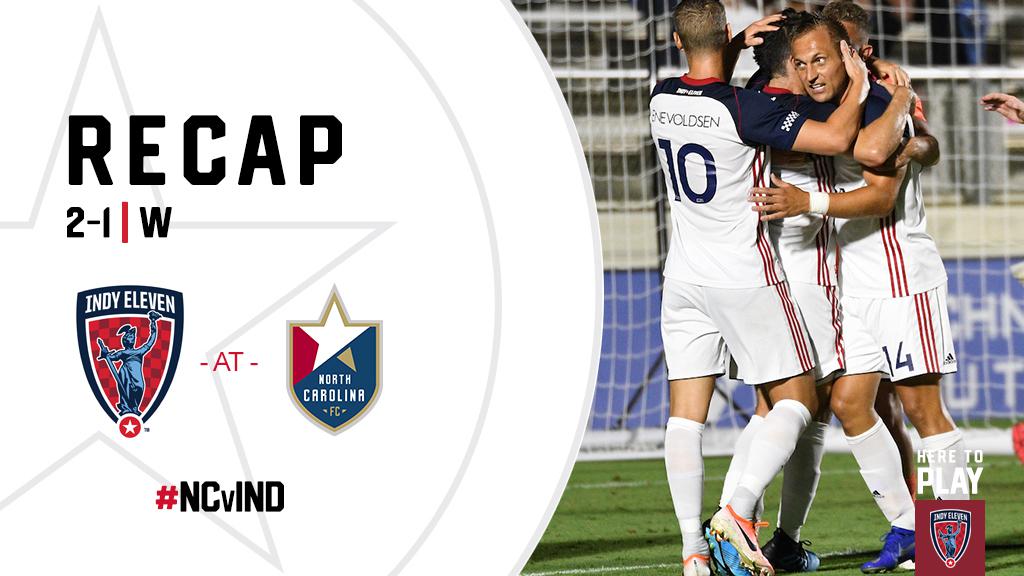 CARY, N.C. (Saturday, August 3, 2019) – The battle for third place in the USL Championship's Eastern Conference between rivals Indy Eleven and North Carolina FC was as competitive as advertised, and ultimately decided by the first goals of the season – one early and one late – by a pair of Indy Eleven veterans.

Eleven captain Matt Watson's 15th minute tally was offset by North Carolina's Andre Fortune in the 69th minute, but Ilija Ilic came off the bench to rescue the full three points courtesy of an 87th minute header that propelled Indiana’s Team to a pivotal 2-1 away win at Sahlen's Stadium at WakeMed Soccer Park.

With the win, Indy Eleven (12W-4L-4D, 40 pts.) took sole possession of third place in the East standings after entering the evening tied with NCFC (10W-5L-7D, 37 pts.). The win allowed Indy Eleven to keep pace with second-place New York Red Bulls (44 pts.) and the leading Tampa Bay Rowdies (46 pts.) - both of whom Indy Eleven owns a pair of games in hand on. The sixth road win of the season set a new Indy Eleven record in the category, the team’s away ledger in 2019 standing at a solid 6W-4L-0D.

“Tonight’s focus was squarely on getting our play to the standard that is acceptable for our team,” said Indy Eleven Head Coach Martin Rennie. “There were lots of things in the last game that weren’t where we wanted them to be, but this week we worked really hard to get back to the level that we know we can play at, and I think that showed tonight. I think that’s a franchise record for away wins in a season, so I think that’s something we can be very pleased with as well.”

While Rennie started the match in the stands of the park he once coached in due to last weekend’s ejection in Nashville, his Boys in Blue started on the front foot, with Tyler Pasher getting two good looks from inside the area within the first seven minutes. Right before Pasher’s first attempt in the fifth minute, midfielder Ayoze looked to have an early claim for a penalty when NCFC goalkeeper Alex Tambakis appeared to make contact on the Spaniard as he got to a loose ball at the top of the six, but play would continue without the crucial early call. Ten minutes in an Indy Eleven foul set up a North Carolina free kick 25 yards from goal, but Fortune’s first shot of an active evening was sent directly into the waiting arms of Eleven netminder Evan Newton.

The Eleven’s bright beginning paid dividends in the 15th minute, when a spell of possession in the final third ended at the feet of Watson 30 yards from goal. The Indy captain made no hesitation with his low strike, a one-hopper that caught Tambakis flat-footed and snuck inside the left post, giving the visitors the early advantage.

Pasher nearly took advantage of a turnover in the 22nd minute, his 35-yard run into the area ending with a shot-turned-cross that was just a foot too heavy for forward Dane Kelly to get around, the Jamaican unable to redirect on frame at the right post. North Carolina FC’s limited chances continued to come on set pieces, including a quality header by defender Sam Brotherton in the 30th minute off of Ben Speas’ corner that got through traffic but was gathered by Newton. The final clear chance of the half came in the 38th minute on a possession for Indy that looked very much like the one setting up Watson’s opener, but Pasher’s dipping shot from distance just whistled over the crossbar.

“I think the whole first half tonight was a really good performance. We were on top, held the ball well and created good chances, and we probably feel like we could have had more than one goal,” said Rennie, who handed over interim coaching duties on the evening to first year Assistant Coach Juan Guerra. “We were going against a team that had not lost at home this season and is obviously doing well, so I thought it was important that we imposed ourselves on the game.”

The second half began with North Carolina firing on all cylinders, the most dangerous of a flurry of early activity coming via Fortune’s header off an Aaron Guillen corner in the 48th minute that just cleared the crossbar. It was another header off a corner kick in the 56th minute that caused more concern inside the Indy area, this time by Elrich Uwolo, but Newton was there to tip the chance over. With NCFC taking a stranglehold of the possession Indy adjusted to find joy on the counter and nearly did so in the 64th minute, but Guillen did well to recover and slide in to block Ayoze’s open shot 10 yards from goal.

The home side’s persistence paid off in the 69th minute through Fortune, who accepted a pass from Guillen at the top left corner of the area and had time and space to open his hips and aim for the upper right 90, his perfectly-placed shot giving Newton no hope and squaring the proceedings at 1-1 heading into the final 20 minutes.

Neither team could muster a shot on goal in the minutes that followed – that is until the visitors hit paydirt with three minutes remaining in regulation. With even numbers in the final third, Ayoze would chip into the left side of the area for midfielder Tyler Gibson who, after patiently letting the ball bounce towards the endline, would clip in a ball inside the six-yard box. The run Gibson was waiting for was Ilic’s, the 80th minute substitute crashing his header from three yards out underneath the crossbar to provide yet another late match winner for Indy Eleven, the sixth one to come past the 80th minute out of its dozen wins on the campaign.

“Really happy for (Ilija). We’ve missed him a lot, and I don’t know if people fully realize it, but we certainly do,” said Rennie. “It should be a big lift for him. He’s been through a lot, coming to a new club and not being fully able to show what he can do yet, but I think he started to tonight and our fans should be really happy about that.”