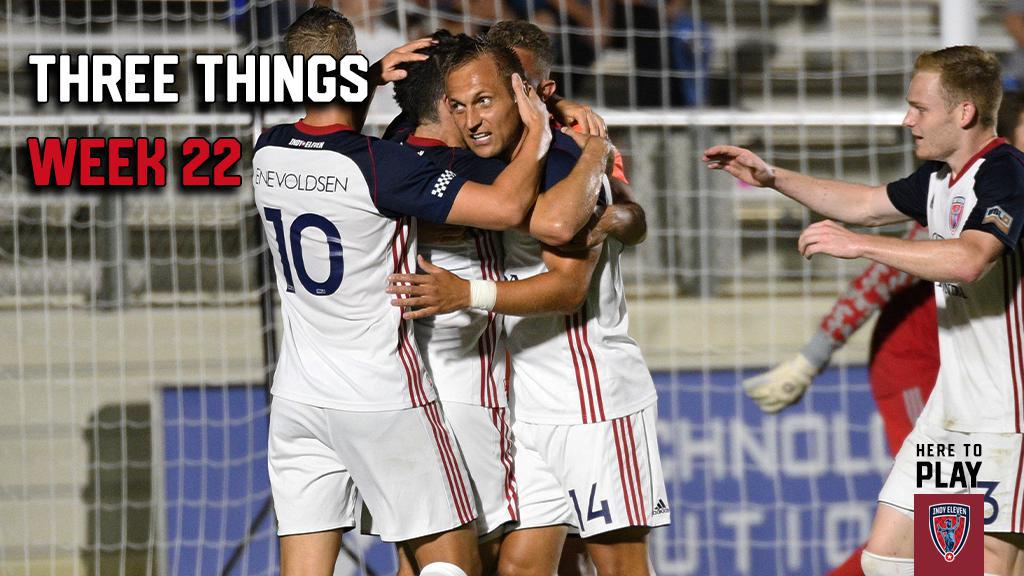 After every game in 2019, IndyEleven.com’s Drew Kamaski will give his three takeaways from the performance of the Boys in Blue. This week's edition comes after Indiana's Team's 2-1 victory at North Carolina FC in Week 22 USL Championship play.

The Boys in Blue don’t mind leaving it late. In fact, they appear to have a knack for it after scoring yet another goal in the final 10 minutes of regulation time last Saturday. It was forward Ilija Ilic’s 87th minute game-winning goal, and the Serbian’s first goal as a member of Indiana’s Team, that spurred Indy to another three points on the road, this time against North Carolina FC.

Ilic’s goal marks the ninth of the season the Boys in Blue have scored after the 80th minute. Even more impressive is the fact that six of the nine late goals have been game-winning efforts, which account for 18 of Indy’s 40 points in the Eastern Conference standings. To put that in perspective, if those six matches would have ended in draws rather than victories, the Boys in Blue could be sitting at eighth in the East on 28 points as opposed to having sole possession of third place.

Speaking of possession, the Boys in Blue sit among the top five distributors in the Eastern Conference, trailing just behind Ottawa Fury FC and recently defeated foes North Carolina FC by less than 100 passes. Indy has played 9,637 passes and completed 80 percent (7,670) of those efforts, tied with North Carolina for the third highest average completion rate in the East. Indy Eleven displayed its class moving the ball Saturday, with 88 percent of passes finding their target, the majority of those coming in a first half in which Indy dominated possession by a 68-32 margin.

What makes Indy Eleven so dangerous is the chances players create from their movement, a choreography that is becoming more and more familiar to the group. The Boys in Blue’s aggressive forward passing, which saw the squad create 11 chances in total on the evening, was rewarded with two goals and arguably the most important three points gained so far this season. Saturday’s result brought Indy’s goal tally to 30 on the season, 19 of which have been assisted on – a trend that is growing as the season rolls on. Of the team’s last 10 goals scored since June 22, eight have been assisted on, with the other two coming via an Ayoze penalty kick and a Birmingham Legion own goal.

Eleven captain and celebrated lover clean living, Matt Watson, seemed to make his way all around Twitter after he scored the opening goal – and his first of the 2019 USL Championship campaign – against North Carolina FC last Saturday. A quick one-two between midfielders Tyler Pasher and Tyler Gibson freed up space for Watson to drive the ball from distance into the bottom left corner of the net, leaving NCFC ‘keeper Alex Tambakis shoving his hands out in disbelief.

The Englishman’s role in in the squad has changed quite a bit since joining Indiana’s Team last season. In 2018, Watson captained the side starting 25 of his 31 appearances, contributing one goal and five assists. Watson has started just five of his 18 appearances this season, seeing the midfielder in more of a super sub role. Despite starting less, his proficiency and versatility remain sharp. Watson equaled his 2018 goal scoring tally with pin-point placement against NCFC and has completed 79 percent of his passes so far this season, as opposed to his 71 percent average in 2018.