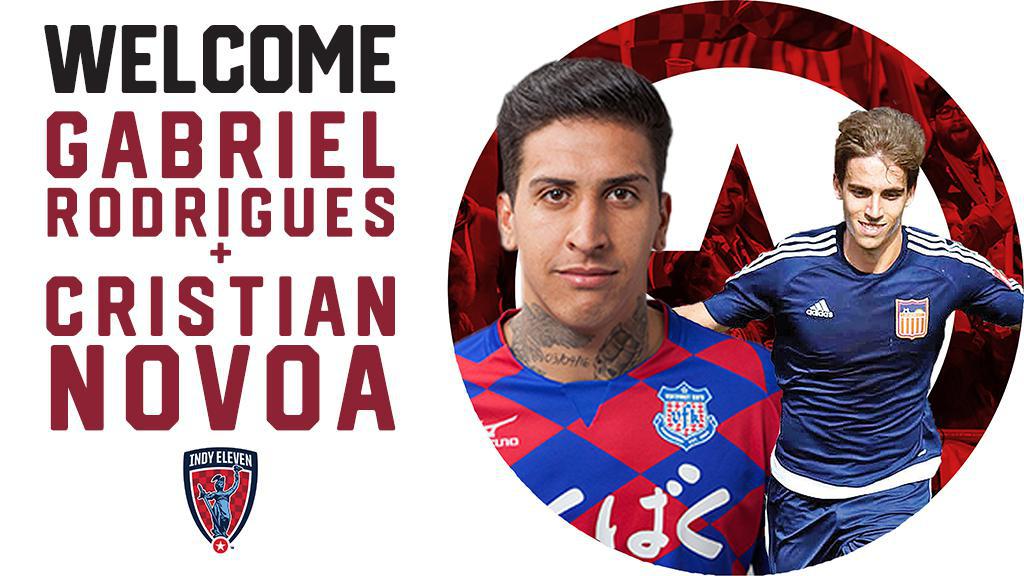 Indy Eleven added more attacking power to its roster with today’s signings of forwards Cristian Novoa and Gabriel Rodrigues for the remainder of the 2019 USL Championship season, pending league and federation approval. Per club policy, terms of player contracts with Indy Eleven will not be released.

Novoa, a native of Caracas, Venezuela, has played professionally in Venezuela, Bolivia, Cyprus and, most recently, Spain with UB Conquense before joining the Boys in Blue. The 28-year-old has spent the majority of his career in the Venezuelan top flight Primera Division, beginning with Caracas Futbol Club in 2010. Novoa enjoyed his most successful seasons with Primera Division side Carabobo FC, where he made 93 appearances and scored 32 goals across two stints from 2013-14 and 2016-17. Novoa played alongside current Indy Eleven Assistant Coach Juan Guerra twice, first at Caracas in 2010 and again with Carabobo from 2013-14.

“Cristian is a player we tried to sign in January before the start of the season, but we weren’t able to do so at the time,” said Indy Eleven Head Coach Martine Rennie. “He’s an exciting goal-scorer with a proven record and we’re excited to have him on our squad.”

Rodrigues, 23, has played for clubs in the Campeonato Paulista and Campeonato Brasileiro in Brazil with Sao Paulo FC, the J2 League in Japan with Ventforet Kofu, and the Portuguese Premeira Liga with CD Aves’ Under-23 squad. The Brazilian spent his youth career with Guarani, a second division side located in Brazil.

“Gabriel is a talented young player that’s played for the biggest club in Brazil [Sao Paulo FC], one of the best clubs in South America,” Rennie said. “He’s a centrally forward striker, which is different from any of the players that we have. He’s good with his back to goal and he’s good in the air. We’re giving him the opportunity to show what he can do, so it’ll be up to him to take the opportunity with both hands and make the most of it.”

In an additional roster move, Indy Eleven came to terms on a transfer agreement with Sacramento Republic FC that will send forward Thomas Enevoldsen to the USL Championship Western Conference side, pending league and federation approval. The 32-year-old Danish striker recorded 20 appearances with Indiana’s Team in 2019, scoring five goals and creating five assists.

“We would like to thank Thomas for his time with Indy Eleven and for his hard work during the first half of the season,” Rennie said. “We wish him all the best with his new club.”