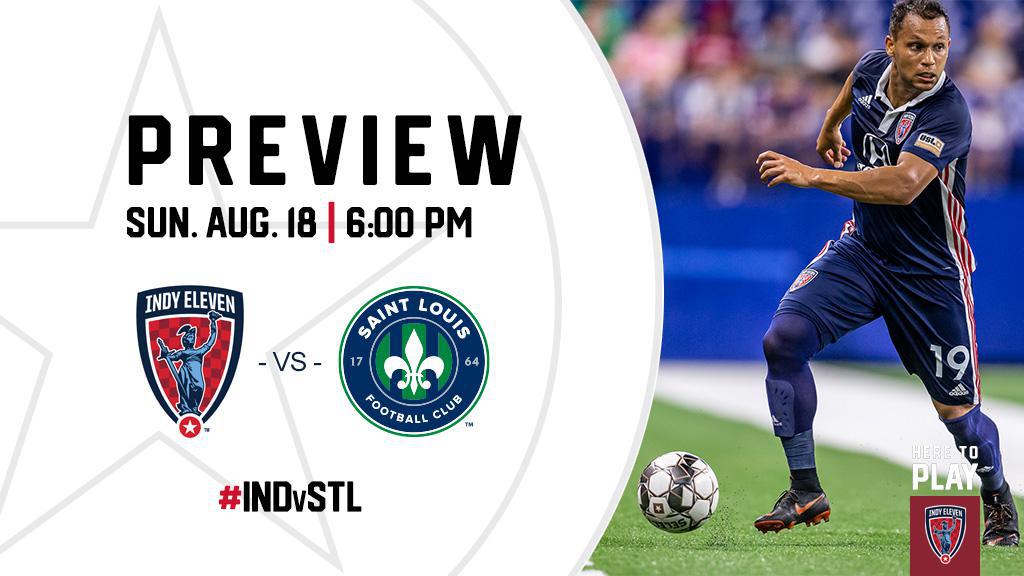 A lone goal from defender Neveal Hackshaw wasn’t enough to garnish any points in Indy Eleven’s 2019 USL Championship season opener. Despite scoring first in the 61st minute, the Boys in Blue surrendered goals to Saint Louis’ Phanuel Kavita (69’) and Russell Cicerone (76’) resulting in a win for the home team.

Indy Eleven left it late again, defeating North Carolina FC on the road 2-1 courtesy of forward Ilija Ilic’s 87th minute goal, the Serbian’s first of the season. Ilic’s game-winner came 72 minutes after midfielder Matt Watson opened the night’s scoring with his first goal of the season in the 15th minute. Indy’s early lead was nullified in the 69th minute when NCFC’s Dre Fortune tucked his shot into the back of the net, but it wasn’t enough to stave off Indiana’s Team. The victory was enough to keep the Boys in Blue ahead of North Carolina FC on the table, and even after an off week they remain one point off of third-place Nashville SC, with three games in hand on the Tennessean team.

Saint Louis FC walked away with a point after their last home fixture against Charleston at West Community Stadium. Captain Sam Fink scored his fifth goal of the season, Saint Louis FC’s only goal of the game coming from the spot in the 68th minute to bring the scores level. Despite controlling possession and outshooting a 10-man Charleston 18-8, the Missouri-based club couldn’t find a second goal to secure the full three points.

Walker’s first assist came in the opening game of the 2019 USL Championship season against Saint Louis FC back on March 9. The former FC Cincinnati midfielder assisted defender Neveal Hackshaw in scoring his first goal as an Indy Eleven player from a well-placed corner kick in the 61st minute. Walker went on to record two more assists the following two games before being sidelined for a short period with injury.

The 30-year-old has been a consistent presence in the midfield, completing 81% of his passes through 17 appearances in his first season with Indiana’s Team. He’s moved the ball, and did so especially well against Saint Louis, completing 88% of his passes in Week One.

Grief, the squad’s joint-leading scorer forward, will look to add to his current five-goal tally against Indiana’s Team this Sunday. The 29-year-old has been an aerial force for Saint Louis through his 19 appearances, as every goal the six-foot-two-inch forward has scored has ricocheted off his cranium.

The Boys in Blue will have to mark Greig tight during dead ball situations and when lofty crosses are played into the box. The forward leads his team in aerial duels won, winning 102 of the 170 he’s battled in. Greig failed to cross the goal line in the last outing against Indy, but was able to record the assist on Saint Louis’ winning goal.

In the first meeting between Indy Eleven and Saint Louis FC, young forward Josh Penn ran rampant down Saint Louis’ flanks. Penn showed flashes of brilliance with his skill and nearly scored the game’s opening goal, even grounding the outside back he faced with a stutter step leading up to the on-target attempt.

Now, Saint Louis will have to deal with experienced winger and midfielder Tyler Pasher in the role that Penn played at the start of the year. Pasher leads Indy in scoring with eight goals to date, three of which have come as bursting runs down opposition flanks at the expense of Pittsburgh Riverhounds SC, Charleston Battery and most recently against Loudoun United FC. Pasher’s been deadly when placing shots on target, scoring half the 16 shots he’s put on frame.

The man in the middle of the Saint Louis defense tasked with containing the pacey Canadian is center back Sam Fink. The 26-year-old dominates Saint Louis’ defensive statistics, leading his side in every major category. He’s also tied with Greig for goals scored (5) after converting a penalty in the last match against Charleston – and that doesn’t count the clutch late goal he tallied in Lamar Hunt U.S. Open Cup play to down MLS side FC Cincinnati in dramatic fashion. The captain, now in his fourth season with Saint Louis FC, has been incredibly dependable for his side this season, starting every match and being subbed off in only one appearance.

Indy Eleven (12W-4L-4D, 40 pts., 5th in Eastern Conference) will return to USL Championship action with a pair of Sunday evening affairs the next two weekends against Saint Louis FC on Aug. 18 (Faith & Family Night) and Charlotte Independence on Aug. 25 (“Red Out” Summer Celebration). Tickets for those 6:00 p.m. contests at Lucas Oil Stadium remain available for as little as $15 and can be purchased at indyeleven.com/tickets or by calling 317-685-1100.