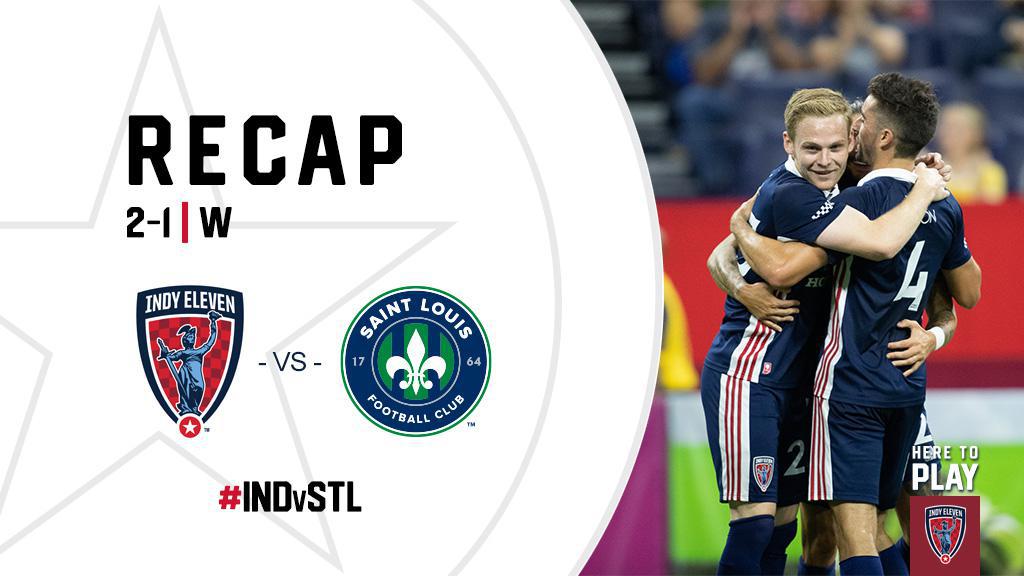 Indy Eleven returned to USL Championship play after a two-week layoff tonight against Saint Louis FC with two familiar refrains – late scoring and a home win. This time it was forwards Tyler Pasher (67') and Dane Kelly (81') doing the damage for the Boys in Blue, who avenged a 2-1 season-opening loss to the Missouri side back in early March via the same scoreline tonight in front of 10,035 fans at Lucas Oil Stadium.

With the win, Indy Eleven (13W-4L-4D, 43 pts.) kept pace with the Eastern Conference elite, Indiana's Team moving back into fourth place in the standings. However, the Boys in Blue also carry two or three games on each of the three squads above them on the East table - Nashville SC (45 pts.), Tampa Bay Rowdies (46) and New York Red Bulls II (47) - keeping them poised to battle for the conference's top seed in postseason play with less than two months remaining in the regular season. Meanwhile, Saint Louis FC (6W-9L-8D, 26 pts.) remained in 11th place in the East after the defeat, staying one spot below the conference’s playoff line.

Saint Louis FC asked the first question of the night just 20 seconds into the match via forward Kyle Grieg’s looping header, which Indy Eleven goalkeeper Evan Newton tipped over his crossbar. In the sixth minute the visitors again found danger after a turnover in the midfield, Saint Louis quickly countering down the left flank. The ball eventually found forward Kadeem Dacres outside the 18-yard box, but his powerful drive was once again pushed over by Newton.

The next chance of the game wouldn’t present itself until just before the half in the 40th minute when an Indy Eleven counter launched midfielder Matt Watson down the right side of the pitch. The Englishman’s square pass to the penalty spot connected with forward Ilija Ilic, who forced Saint Louis ‘keeper Tomas Gomez into a full extension save via a low shot to the bottom left corner.

Indiana’s Team created the first chance of the second half seven minutes in, courtesy of midfielder Kenney Walker’s corner kick. His lofted ball connected with fellow midfielder Tyler Gibson, whose right-footed, volleyed effort sailed over the center of the goal.

Indy continued the pressure throughout the next 10 minutes of the match, playing in a bevy of crosses and earning three corners along the way. The best chance from the barrage came in the 62nd minute by way of defender Neveal Hackshaw, whose header most likely would have found its way into the back of the net if not for a block on the line.

Indy’s unrelenting pressure finally cracked the Saint Louis defense five minutes later when the in-form Pasher, who entered at the half in place of Eugene Starikov, was freed down the right wing by defender Lucas Farias. Pasher carried the ball into the Saint Louis box before cutting back onto his stronger left foot and burying the ball inside the bottom of the left corner, garnishing a 1-0 lead for the Boys in Blue.

Two minutes later in the 69th minute, Gibson nearly doubled the lead with a cracker of a strike from 30 yards out that luckily for Gomez bruised his crossbar.

Kelly sealed the deal for Indiana’s Team in the 81st minute with another late goal after a long ball played by defender Paddy Barrett bounced its way down the field. The Jamaican tracked the clearance and jostle his way past a Saint Louis center back before chipping the ball over Gomez and into the back of the net. The fifth goal of the season for Kelly snapped a 13-game goalless drought and allowed him to reclaim sole possession of the USL Championship’s all-time goal scoring lead, breaking a deadlock with Charlotte Independence forward Jorge Herrera.

“In the first half we didn’t have the pace we did in the second half. That made a difference because we were able to get behind [the ball] and threaten more. We managed to switch the ball better and create more space,” explained Rennie. “I’m happy with the win, it’s one we can continue to build on. When you have a longer break like we had it can be difficult to get back into it and I think that showed in the first half. By the second, we looked sharp and had good tempo.”

Saint Louis did their best to draw level and earn a point in stoppage time, starting two minutes in when midfielder Lewis Hilton placed a direct free kick into the top right corner of Newton’s net, leaving him with no chance and cutting the Indy lead in half.

Indiana’s Team held off the final Saint Louis charge, finished the night with a 2-1 win that extended its undefeated streak at home to 19 games (12W-0L-7D), dating back to July 7 of last year. That dominant run of form at home includes a 7W-0L-4D mark in 2019, with Indy Eleven scoring 13 goals and allowing only three so far this season in 11 games at Lucas Oil Stadium.

Indy Eleven will look to continue its climb up the Eastern Conference standings next Sunday, Aug. 25, when Indiana’s Team plays host to Charlotte Independence (5W-10L-10D, 25 pts., 12th in East). Kickoff for the team’s “Red Out Night” contest – for which fans are encouraged to wear their favorite red gear to Lucas Oil Stadium – is set for 6:00 p.m. (live on WISH-TV 8), and tickets remain available for as little as $15 at indyeleven.com/tickets or by calling 317-685-1100.