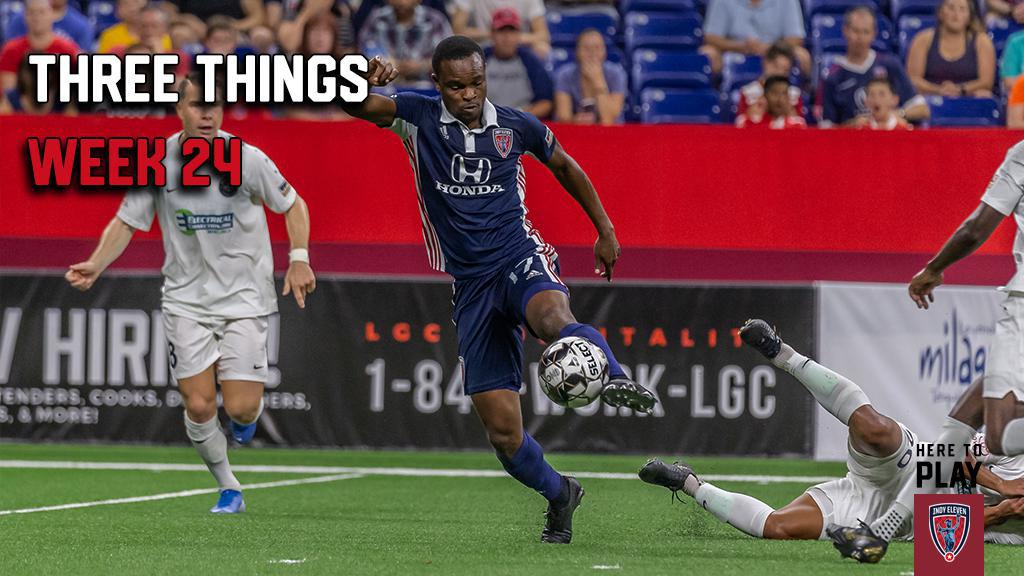 After every game in 2019, IndyEleven.com’s Drew Kamaski will give his three takeaways from the performance of the Boys in Blue. This week's edition comes after Indiana's Team's 2-1 victory vs. Saint Louis FC in Week 24 USL Championship play.

The Streak Is Over

Not the home unbeaten streak, but a goalless streak. Forward Dane Kelly snapped his run of 13 goalless games after netting the winning goal in the 81st minute of Sunday’s 2-1 win vs. Saint Louis FC at Lucas Oil Stadium. The Jamaican’s last goal came on the road against New York Red Bulls II back on April 28th.

“I’m smiling,” Indy Head Coach Martin Rennie said after the game. “It’s good for everybody and it’s great for him.”

Kelly scored his fifth goal of the season, and in doing so reclaimed his solo title as the USL Championship’s all-time leading goal scorer, regaining the lead from Charlotte Independence forward Jorge Herrera, whom Indy will host this Sunday night.

“He’s a player who goes on streaks, so hopefully he gets on one again and keeps it going,” Rennie said.

Kelly’s goals indeed seem to come in waves, as his first four of the year came in three back-to-back-to-back games in April. Ideally, this is the start of a new string of goal scoring performances for the 28-year-old, an idea the only Boy in Blue who has scored more than Kelly this season – winger Tyler Pasher – agrees with.

“With Dane, he just needs one goal and now it’s just going to keep coming for him,” Pasher said.

He’s finally back. For the first time since the 2019 home opener on March 30 against Hartford Athletic, forward Eugene Starikov returned to the starting XI for the Boys in Blue. The 30-year-old received 45 minutes against Saint Louis on Sunday night, after playing 27 minutes against National Premier Soccer League’s Detroit City FC in Indy Eleven’s first away in-season friendly last Tuesday, scoring the game’s lone goal shortly after coming into the match in the 1-0 win up north.

“He’s on the comeback trail and obviously not his sharpest yet,” Rennie said. “He played 30 minutes in mid-week and we wanted to get him 45 [tonight]. The only way we could do that was to start him, and it worked out really well.”

Starikov didn’t tally any shots on goal in his first appearance back, but did complete every pass he played. The forward’s return bolsters the Indy Eleven front third, which now consists of new signings Cristian Novoa and Gabriel Rodrigues in addition to Kelly, Pasher, and a fellow forward returning from injury in Ilija Ilic.

“It was good to see Eugene back. He has been out for so long and it’s been so unlucky for him,” Pasher said. “He’s going to tick, and he’s going to be very helpful for the team going forward.”

Coming into his Own

The victory over Saint Louis FC marked defender Lucas Farias’ eighth start in 10 appearances for Indiana’s Team since his arrival in early February. The Brazilian has started to become a bit of a regular in Rennie’s starting XI, with five of his eight starts for the Boys in Blue coming in his last seven matches.

“He’s played quite a lot of games in a row and his confidence is growing,” Rennie said. “You’re talking about a player at one point who was the captain of the Brazilian Youth National Team and played for Sao Paulo.”

The 25-year-old created the game’s first goal on Sunday, assisting Pasher with a through ball down the right flank that led to a breakaway, creating the opportunity for the Canadian to tuck away his ninth goal of the 2019 campaign. Farias has played creator a couple other times for his teammates, recording three assists on six chances created so far through his first season stateside.

“He’s just getting into his rhythm now,” Rennie said after Sunday’s win. “He’s obviously a very talented player and I think tonight you started to see it. It’s exciting when you see players start to fill their potential.”