Boys In Blue Look to Continue Hot Form at Home in Second Match-up vs. Charlotte Independence 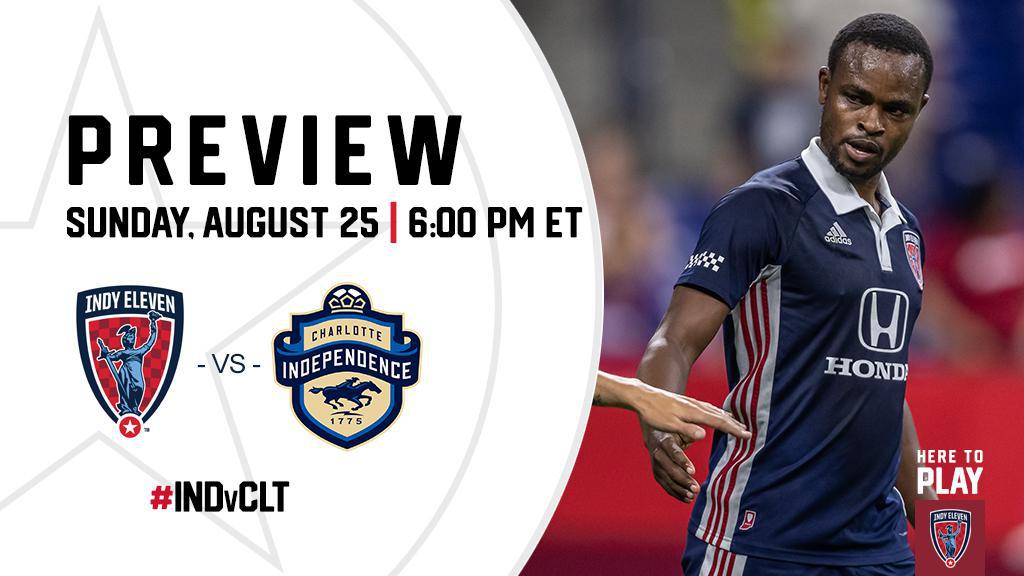 The Boys in Blue staved off two late goals at Charlotte Independence to secure a 3-2 victory in Week Two of USL Championship play. Goals from midfielders Macauley King and Tyler Gibson, in addition to a third from forward Thomas Enevoldsen, were enough to maintain the lead and begin a four-game winning streak.

Indy Eleven’s relationship with late-game drama continued to burn bright after an 81st minute goal from forward Dane Kelly grabbed another three points last Sunday, lifting the undefeated run at Lucas Oil Stadium to 19 games. In-form midfielder Tyler Pasher scored the game’s opening goal, and his ninth of the season, in the 67th minute before Kelly doubled the lead. Forward Eugene Starikov also returned to the field for the first time since March 30, and new signee Drew Conner made his debut for Indy.

Charlotte Independence fell to Nashville on Saturday night after midfielder Enzo Martinez’s equalizer in the 23rd minute was nullified by a pair of second-half goals by Nashville’s Daniel Rios and Kharlton Belmar. The loss extends Charlotte’s winless streak to five (0W-3L-2D), with their last victory dating back to a 2-1 win over Saint Louis on July 13.

When not on international duty, Neveal Hackshaw has been the man tasked with handling the left side of Head Coach Martin Rennie’s backline. The Trinidad & Tobago international has been Rennie’s go-to defender, playing every minute of the 17 starts he’s received in his first year with the team. He’s been a prolific defender since signing for the Boys in Blue, working in tandem with the likes of Paddy Barrett and Karl Ouimette to keep the opposing attack at bay.

The 23-year-old’s transition from the midfield to the back third has also contributed to his excellent passing numbers. Hackshaw has completed 81% of his passes this season in addition to contributing two goals. He’ll be tasked with keeping forwards Jorge Herrera and Dominic Oduro quiet on the flanks against Charlotte on Sunday.

Enzo Martinez’s 23rd minute equalizer was Charlotte’s lone goal against Nashville SC in the previous loss to the Tennessean side. Normally though, the 2016 and 2017 All-League First Team member acts as the team’s creator rather than goal scorer.

Martinez leads Charlotte with six assists through 23 appearances. The 28-year-old leads his side in chances created as well, supplying 44 scoring opportunities for his teammates, nearly 10 more than the next in line. The Boys in Blue back third will have to keep an eye on Martinez come Sunday, as he created two chances, one of which led to a goal, in their previous meeting.

Sunday night’s fixture will feature a marquee matchup between the USL Championship’s all-time leading goal scorer in Indy forward Dane Kelly and the runner up to the title in Charlotte’s Herrera.

In his last time out, Kelly broke his 13-game goalless streak when he toe-tipped the winning goal past Saint Louis FC ‘keeper Tomas Gomez in the 81st minute. The goal was the Jamaican’s fifth of the season. putting him back atop the all-time goal scoring chart in league history with 72 regular season goals to his name. His pace and power in the final third make Kelly difficult for centerbacks to track and contain, as he showed against Saint Louis when he bodied off captain Sam Fink and applied the finishing touch to claim the full three points. Kelly has a bone to pick with Charlotte, after he hit the crossbar in the first meeting between the two sides.

A goal for Herrera on Sunday night would bring the Columbian back on level terms with Kelly for most goals scored in all-time Championship play. The 38-year-old has netted six times in 2019, making him the side’s second highest goal scorer behind Oduro. In his last three games, he’s contributed to three goals, scoring one and assisting the other two. Herrera will look to keep in form going against the Boys in Blue, but may find it difficult as he failed to put a single shot on target the last time he faced Indiana’s Team.