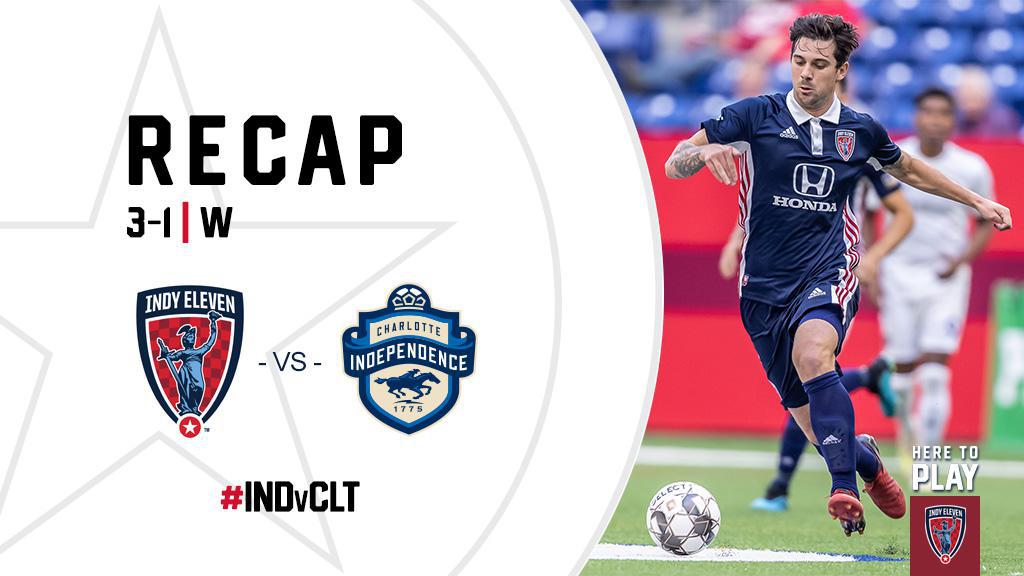 Indy Eleven overcame a rare deficit at home to continue an all too familiar trend at Lucas Oil Stadium, coming back to post a 3-1 win over Charlotte Independence Sunday evening. A late first-half equalizer by defender Karl Ouimette was followed by a second-half brace by New in Blue midfielder Drew Conner, punctuating his first start for the Boys in Blue in impressive fashion.

With the win, Indy Eleven (14W-4L-4D, 46 pts.) pushed its impressive home undefeated streak to 20 games dating back to last July, including an 8W-0L-4D (16 goals scored/4 goals allowed) ledger in 2019. Indiana’s Team also kept pace with the Eastern Conference leaders, now even with North Carolina FC in fourth place and within a game of the second-place Tampa Bay Rowdies (49 pts.) and third-place Nashville SC (48). Indy Eleven still has either three or four games in hand on all the teams in front of it on the East table, including the leading New York Red Bulls II (53 pts.).

A bit of luck saw Charlotte (5W-11L-10D, 25 pts.) strike first by way of a free kick in the 15th minute. After Indy gave up a questionable foul 25 yards out, Charlotte midfielder Isaac Angking launched his free kick toward the right side of Indy goalkeeper Evan Newton’s net. A deflection in the wall off forward Niki Jackson redirected the ball to the opposite side of Newton’s dive, trickling into the goal and handing Charlotte the 1-0 lead. The deficit was only the second of the season at home for Indy Eleven, which trailed for 56 minutes of its eventual 2-1 win over Pittsburgh Riverhounds SC back on June 1.

Four minutes later, Indy forward Tyler Pasher nearly drew the equalizer from a pacey run down the right flank. The Canadian cut in on his dangerous left foot and dribbled past four defenders before unleashing a shot to the top right corner that forced Charlotte ‘keeper Brandon Miller into his first save.

Indy continued to apply pressure after giving up the opener, and it paid off in the 42nd minute as Ouimette brought the teams level. A free kick played in by defender Ayoze looked destined to go out of bounds at the far post – until defender Neveal Hackshaw redirected with a header back into the center of the box. Ouimette finished the play off, rising over a defender to head home from four yards out, the equalizer serving as the last meaningful action of the opening half.

Indy began the second half how it finished the first, applying pressure and creating a goal. A cross played in by Ayoze found forward Ilija Ilic at the back post, and the Serbian redirected the cross back to defender Paddy Barrett, who connected well with a well-struck aerial attempt. Miller made the initial save on Barrett’s bicycle kick, but a lurking Conner would tap in the parried save at the back post, scoring his first goal in his first start for the Boys in Blue in the 53rd minute.

Charlotte attempted to answer in the 77th minute with a quick one-two play that Ouimette negated. The clearance made its way to Charlotte’s Aaron Maund, who had a go from nearly 35-yards out. Mound connected well with the strike, but Newton was alert to answer, catching the shot from distance with both hands at full extension.

Six minutes later, Conner added a third courtesy of a Charlotte miscue. Independence defender Steven Thicot returned a short ball back to Miller, who attempted to drill the ball upfield. However, Conner read the passing lane and headed Miller’s clearance directly towards the net from 25 yards out, leaving the goalkeeper stranded and doubling the Indy advantage which would remain through the last 10 minutes of regulation and stoppage time.

Indy Eleven will begin the most packed stretch in the club’s history – a run of 10 games in 36 days – this Friday, August 30, when it travels south down I-65 to take on rival Louisville City FC at Louisville Slugger Field. The 7:00 p.m. ET installment of the Louisville-Indianapolis Proximity Association Football Contest will air live locally on WISH-TV 8 and nationwide on ESPN3.

Indy Eleven will then return to Lucas Oil Stadium on Wednesday, September 4, when it will look to even its club-record 21-game home unbeaten streak in a pivotal contest against East-leading New York Red Bulls II. Kickoff for that contest is set for 7:00 p.m. ET, and tickets remain available for as little as $15 at indyeleven.com/tickets or by calling 317-685-1100.