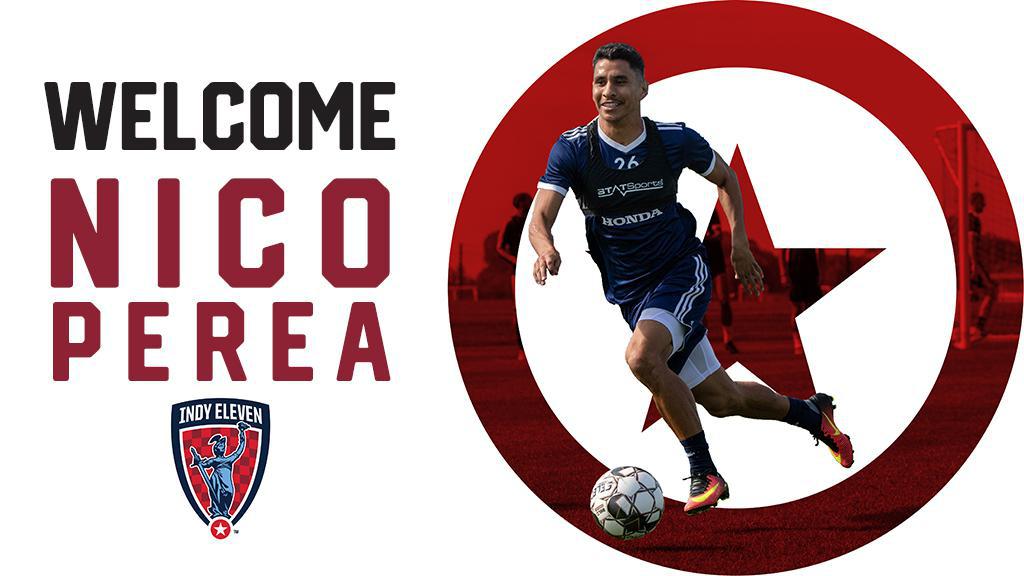 Indy Eleven continued to bolster its roster leading into the final two months of the USL Championship campaign with today’s signing of midfielder Nico Perea. The 27-year-old will be available for immediate selection ahead of Indy Eleven’s next fixture at Louisville City FC this Friday, August 30, at 7:00 p.m. ET (live on WISH-TV and ESPN3).

“Nico came in and trained with us about a week ago and played for us in our in-season friendly against Detroit City FC. He did really well throughout training and in that game,” said Indy Eleven Head Coach Martin Rennie. “We did a little more research to find out more about him. He fits our style of play and our culture really well. He’s coming in at the right time with a lot of games ahead and we need everyone available. We’re really happy to have him.”

“I’m extremely excited to join such a great organization,” said Perea. “The level of professionalism I’ve received from the staff and players has made my first few days as a Blue memorable. We have a very talented group and I can’t wait to join them on game day!”

Perea spent the front half of 2019 with USL League Two side Des Moines Menace, where he scored two goals and added an assist across 13 total appearances (12 regular season and one playoff).

Before making his debut in Des Moines, Perea spent 2017-18 with the USL Championship’s Rio Grande Valley FC. The Colombian-born midfielder scored three goals in 30 appearances for the Western Conference club while earning Team of the Week honors once.

Perea spent two seasons (2015-16) with Jacksonville Armada FC during the club’s NASL era before joining Rio Grande, making 24 appearances – three of which were against the Boys in Blue.

The midfielder spent his collegiate career at Syracuse University from 2011-2014, making 76 appearances and scoring 10 goals. He also appeared for USL League Two side Ocean City Nor’Easters (2013) and former League Two club KW United FC (2014) during his time in college.

Friday’s away installment of the Louisville-Indianapolis Proximity Association Football Contest will mark the beginning of Indy Eleven’s busiest stretch of games in club history, a 10-game, 36-day gauntlet that will see Indiana’s Team make up the several games in hand it has on its fellow Eastern Conference elite.

Indy Eleven will then return to Lucas Oil Stadium next Wednesday, September 4, when it will look to even its club-record 21-game home unbeaten streak in a pivotal contest against East-leading New York Red Bulls II. Kickoff for that contest is set for 7:00 p.m. ET, and tickets remain available for as little as $15 at indyeleven.com/tickets or by calling 317-685-1100.