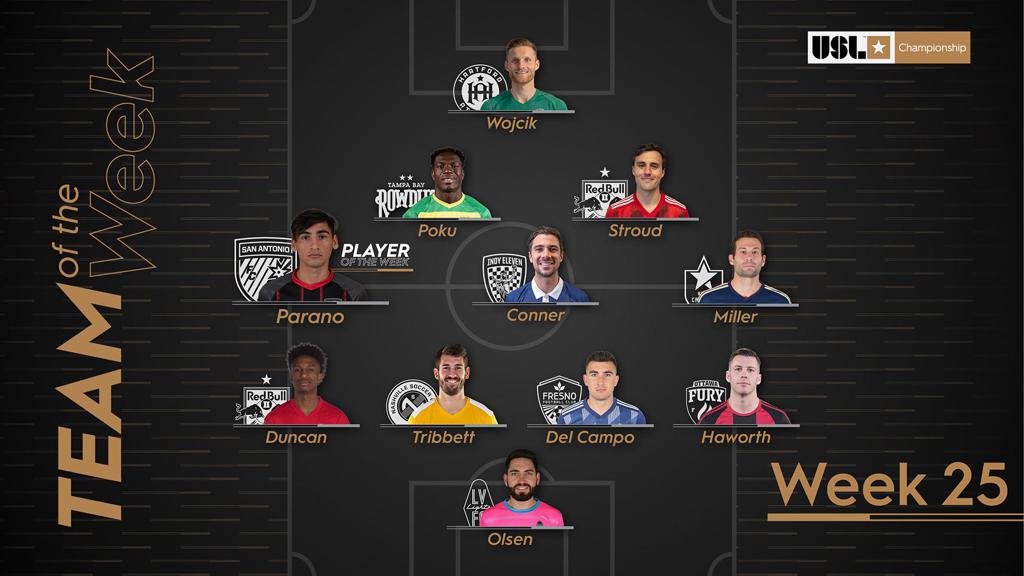 Indy Eleven midfielder Drew Conner has been voted to the USL Championship Team of the Week for Week 25 of the 2019 season. The TOTW honor comes after the 25-year-old scored two second-half goals in his first start with Indy Eleven last Sunday night, spurring a 3-1 win vs. Charlotte Independence that extended the club’s unbeaten run at home to 20 games. In addition to notching his first two professional goals, Conner created two chances and completed 96% of his 44 passes on the evening.

Conner’s TOTW appearance is the 10th time this season a member of Indiana’s Team has made the league’s weekly honor roll. Kenney Walker (Week 2), Ayoze Garcia (Week 4, 11), Dane Kelly (Week 7; Player of the Week), Evan Newton (Week 9; Player of the Week), Neveal Hackshaw (Week 12) and Tyler Pasher (Week 13, 15, 17) have all earned spots in Team of the Week lineups so far this season.

Conner and the rest of the Boys in Blue will return to action with Friday’s away installment of the Louisville-Indianapolis Proximity Association Football Contest against Louisville City FC  (7:00 p.m. ET, live on WISH-TV and ESPN3). The game will mark the beginning of Indy Eleven’s busiest stretch of games in club history, a 10-game, 36-day gauntlet that will see Indiana’s Team make up the several games in hand it has on its fellow Eastern Conference elite.

Indy Eleven (14W-4L-4D, 46 pts). will then return to Lucas Oil Stadium next Wednesday, September 4, when it will look to even its club-record 21-game home unbeaten streak in a pivotal contest against East-leading New York Red Bulls II. Kickoff for that contest is set for 7:00 p.m. ET, and tickets remain available for as little as $15 at indyeleven.com/tickets or by calling 317-685-1100.

GK – Thomas Olsen, Las Vegas Lights FC: Olsen recorded a five-save shutout and was also sharp in his distribution as he completed 28 of 34 passes in Lights FC’s 1-0 win against the Portland Timbers 2.

D – Kyle Duncan, New York Red Bulls II: Duncan recorded the game-winning goal – his first as a professional – and an assist in New York’s win against Nashville and completed 84 of 110 passes over two games for the week.

D – Ken Tribbett, Nashville SC: Tribbett recorded one goal and one assist over two contests while also winning 15 of 23 duels and 8 of 12 aerials to help Nashville remain in the top three in the Eastern Conference.

D – Ramon Martin Del Campo, Fresno FC: Del Campo scored a late game-winner against Colorado Springs to cap a performance in which he also won 7 of 9 duels and 6 of 7 aerials and completed 16 of 21 passes.

D – Carl Haworth, Ottawa Fury FC: Haworth scored the opening goal in Ottawa’s victory against Saint Louis on his fourth free kick finish of the season while also completing 47 of 59 passes and winning 5 of 8 duels.

M – Kwadwo Poku, Tampa Bay Rowdies: Poku scored twice in Tampa Bay’s victory against Memphis on Saturday and over two games for the week completed 96 of 108 passes and completed 7 of 8 dribbles.

M – Drew Conner, Indy Eleven: Conner scored a pair of goals in his first start for the Eleven on Sunday against Charlotte while completing 42 of 44 passes and recording two key passes.

M – Steven Miller, North Carolina FC: Miller had a pair of goals and made seven recoveries in NCFC’s midweek win against Tampa Bay, and completed 34 of 46 passes across two games for the week.

F – Wojciech Wojcik, Hartford Athletic: Wojcik came off the bench and lead Hartford’s rally with two goals, including a late game-winner, while also completing 9 of 10 passes in the side’s victory against Atlanta.