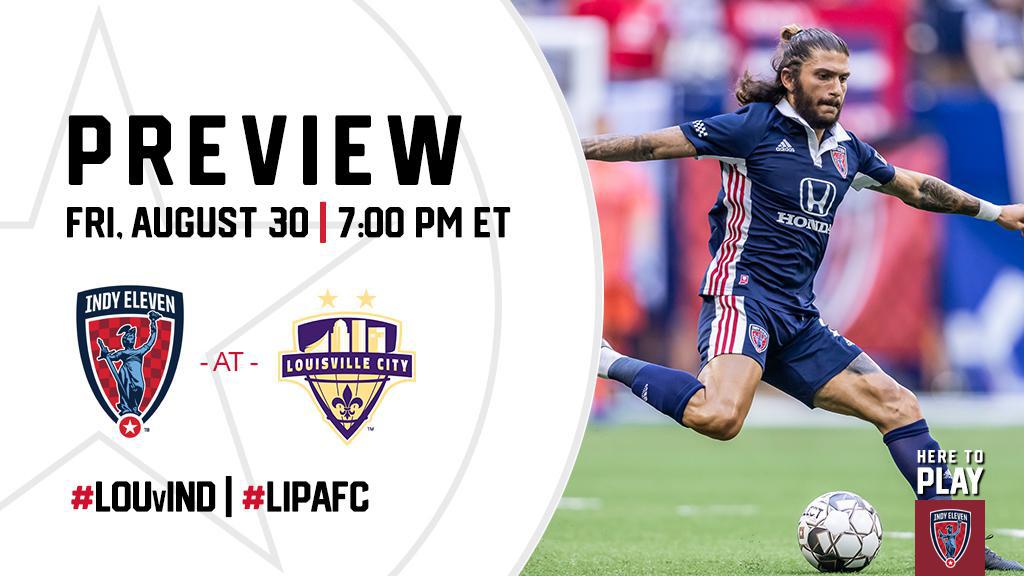 The first edition of the 2019 Louisville-Indianapolis Proximity Association Football Contest ended in a 1-1 stalemate at Lucas Oil Stadium. Indy opened the scoring in the ninth with a goal from midfielder Tyler Pasher, but an impressive, equalizing direct free kick from Louisville midfielder Paolo DelPiccolo 10 minutes into the second half left Indy goalkeeper Jordan Farr flat footed.

Indy Eleven claimed three points in a 3-1 victory over Charlotte Independence on Sunday night after a second-half brace from midfielder Drew Conner sent fans home happy. Charlotte struck first in the 15th minute after an unlucky deflection off Niki Jackson from a free kick found the back of Indy’s net. However, Indy defender Karl Ouimette leveled the scores just before the half. Come the second half, Conner netted his first professional goal in the 53rd minute and a cheeky second 30 minutes later to secure the win.

Louisville City topped North Carolina FC by a score of 1-0 last Saturday after midfielder Magnus Rasmussen tallied his 10th goal of the season in the 55th minute. Louisville also recorded its sixth clean sheet of the season, the first since August 3.

Midfielder Drew Conner had himself a game last Sunday night in his first start since signing for the Boys in Blue on August 13. The former Chicago Fire homegrown product scored his first professional goal and added another for good measure against Charlotte Independence in a 3-1 win at Lucas Oil Stadium.

The midfielder also completed an outstanding 96% of the passes he played against Charlotte, showing the 25-year-old not only knows how to put the ball in the back of the net, but can swiftly move up the pitch, as well. If that wasn’t enough, Conner created two more scoring opportunities for his teammates during his 87 minutes on the pitch, making him all the more dangerous in Indy’s attacking third. What other possible attribute could the versatile Conner bring to the table, you ask? He’s not shy to get stuck in either, which could help the visitors set the tone in an important rivalry game.

Back on July 28, both midfielder Luke Spencer and striker George Davis IV got the start in attacking roles in a 3-0 loss at Loudoun United FC – one that apparently didn’t sit too well with Head Coach John Hackworth. In the four games since, both players have entered every game as second half subs – and both have contributed a pair of goals, including a game-winner.

So if it ain’t broke, don’t fix it, right? Well, with red-hot team leading scorer Magnus Rasmussen suspended for Friday’s fracas due to yellow card accumulation, Hackworth’s hand will be forced, meaning one of the two recent “super subs” will likely be back in the starting XI. Whichever one it is will have plenty of motivation to keep his spot, and therefore might be an extra handful for Indy’s stingy defense.

Coach Martin Rennie is starting to rely on Lucas Farias to man his right flank more and more as we march into the latter half of the 2019 USL Championship season. In the first outing against Louisville, the man tasked with keeping tabs on Farias was midfielder Oscar Jimenez.

The two squared off as attacking outside backs in each team’s system. In the first match against Indy, Louisville played a 3-5-2 formation that saw each player act as an attacking wing back. Since the end of June, Farias has been a prominent figure in Indy’s starting XI, appearing seven times on the right side of the midfield, with the last four consecutive appearances in the starting lineup. The Brazilian has racked up three assists when Indy has had homefield advantage, but playing on the road doesn’t appear to bother him too much. In his most recent away fixtures against North Carolina FC and Nashville SC, the 25-year-old completed 90% of his passes and created one chance.

Jimenez has been an iron man in the Louisville backline, starting all of his 25 appearances and only being subbed off three times. He lined up on the same wing as Farias on June 29 and created five chances compared to that of Farias’ lack of key passes. Neither attacking back was able to complete a hefty number of passes, as the aggressiveness of the last match disrupted the flow of the game, seeing six yellow cards even distributed to both teams. In his last three matches, Jimenez has continued to flex his ability to distribute, recording one assist on 10 chances created. The 29-year-old leads his team by leaps and bounds in that category, having created 80 chances this season.

Friday’s away installment of the Louisville-Indianapolis Proximity Association Football Contest will mark the beginning of Indy Eleven’s busiest stretch of games in club history, a 10-game, 36-day gauntlet that will see Indiana’s Team make up the several games in hand it has on its fellow Eastern Conference elite.

Indy Eleven will then return to Lucas Oil Stadium next Wednesday, September 4, when it will look to even its club-record 21-game home unbeaten streak in a pivotal contest against East-leading New York Red Bulls II. Kickoff for that contest is set for 7:00 p.m. ET, and tickets remain available for as little as $15 at indyeleven.com/tickets or by calling 317-685-1100.