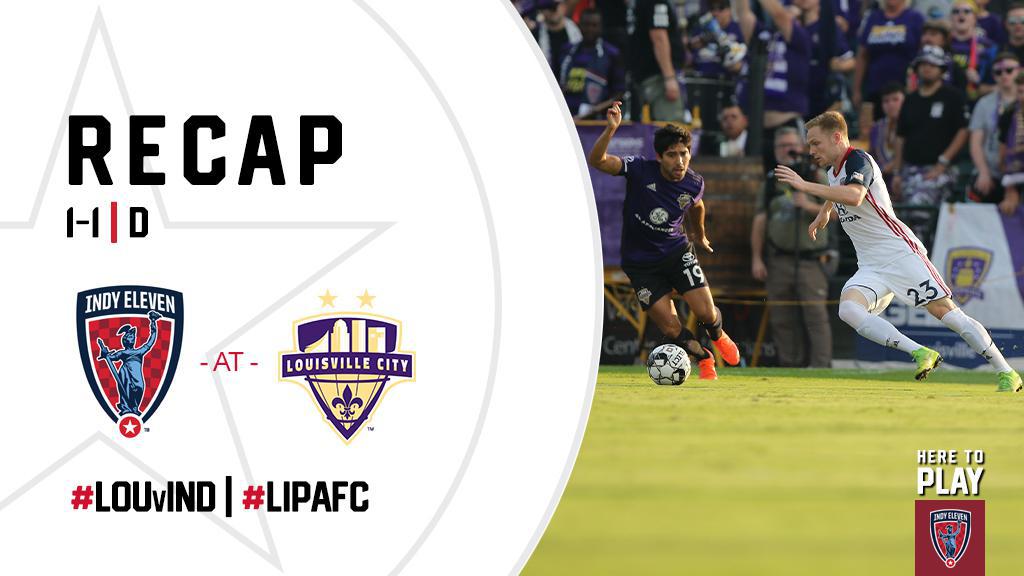 Indy Eleven and Louisville City FC traded goals on either side of halftime and eventually settled for their second 1-1 draw of the 2019 season Friday evening at Louisville Slugger Field.

Indy Eleven forward Tyler Pasher scored his 10th goal of the campaign just before the halftime break to put the visitors up, but LCFC substitute striker Abdou Thiam equalized in the 70th minute to force a share of the spoils from the latest chapter in the increasingly heated Louisville-Indianapolis Proximity Association Football Contest rivalry.

With the draw, Indy Eleven (14W-4L-5D, 47 pts.) remained in fourth place in the Eastern Conference standings (now tied with Pittsburgh Riverhounds SC), but gained a point on conference leader New York Red Bulls II in advance of their showdown Wednesday evening at Lucas Oil Stadium. Indy Eleven still has multiple games in hand on New York and the other two teams – Tampa Bay Rowdies (49 pts.) and Nashville SC (48 pts.) – ahead of it in the standings, although those will begin to dissipate as tonight began a crucial stretch of 10 games in 36 days for the Boys in Blue.

An active start saw Indy Eleven get more than its share of quality chances on goal. A flurry around the 12th minute nearly paid off when midfielder Ilija Ilic tested Louisville ‘keeper Chris Hubbard from 22 yards, and the ensuing corner was pushed just wide by defender Neveal Hackshaw’s sidewinding effort. Ilic was dangerous against his former side again just minutes later with a header that just missed the frame.

In the 17th minute, it was Louisville finally posing a serious challenge to the goal of Indy netminder Evan Newton, who looked big and cut off the angle of forward Antonine Hoppenot’s shot from near the right endline. After the first 20 minutes the chances slowed down, with Louisville winger Oscar Jimenez’s shot from distance in the 37th minute marking the next testing of either goalkeeper.

After a couple of Eleven crosses went wanting in the 42nd minute, a more direct route paid off just a minute later. It was Ilic creating the chance with a diagonal ball just across the midfield stripe for Pasher, who, after touching past center back Pat McMahon, had nothing but green space and Hubbard in front of him. A calm, low finish in stride past the drawn-out City ‘keeper gave the in-form Canadian his second finish in three games and the Boys in Blue the advantage heading into halftime.

It was Louisville City FC wrestling a slight control of the proceedings coming out of the locker rooms, but Indy Eleven would counter with physical answers. City forward Luke Spencer’s header in the 56th minute asked the first question of the half but drifted wide, while another Pasher breakaway five minutes later ended with a shot that Hubbard touched wide and over the endline.

In the 65th minute, Louisville brought on the Senegalese striker Thiam, a move that paid off five minutes later with his third goal of the season. Newton did very well to save the initial danger on his goal, a point-blank header by defender Shaun Totsch, but the rebound fell to Thiam, whose own header was just high enough to beat Paddy Barrett’s touch on the goalline, equalizing the affair heading into the final 20 minutes.

The end of the match turned chippy, as a Thiam challenge on Newton in the 80th minute spilled over a minute later, the two sides scrumming inside the Indy area and cooler heads prevailing before a yellow card was shown to both initial participants in the fracas. Challenges by Indy defenders Karl Ouimette and Ayoze and Louisville forward Niall McCabe also earned cautions in the final 10 minutes, a display perhaps fitting of the growing rivalry between the two sides. Away from the plethora of fouls down the stretch, it was Thiam enjoying one last look of quality, but his shot from the right side of the area 90 seconds into six minutes of stoppage sprayed wide of the near post.

Indy Eleven will look to equal its longest home unbeaten streak in club history at 21 games this coming Wednesday, September 4, when Indiana’s Team returns to Lucas Oil Stadium for the pivotal contest against New York Red Bulls II. Kickoff is set for 7:00 p.m. ET, and tickets remain available for as little as $15 at indyeleven.com/tickets or by calling 317-685-1100.