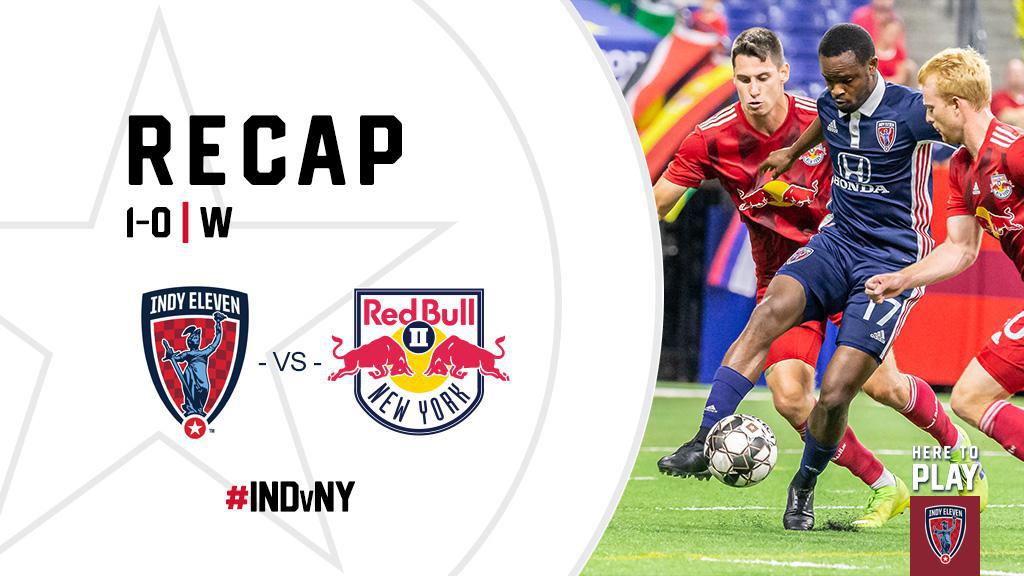 “We felt New York’s space as the game went on, since they press really high, the space was going to be behind a lot,” said Indy Eleven Head Coach Martin Rennie. “We knew Pasher couldn’t keep going behind for 90 minutes, so we felt that maybe with a little bit of time left that Dane would be a threat behind. That worked out well for us because then it keeps them honest all of the time. It was a great goal for us and, like I said in the beginning, against a really good team, lots of good players. I think their system and how they play is really hard to play against.”

The win over Eastern Conference leading Red Bulls II allowed Indy Eleven (15W-4L-5D, 50 pts.) to jump into third place and within a win of the top spot, while still holding three huge games in hand on both New York (16W-6L-5D, 53 pts.) and second-place Nashville SC (51 pts.).

Kelly's 83rd minute winner off the bench also pushed Indy Eleven's home undefeated streak to a record-tying 21 games, equaling a similar run across the 2015-17 seasons during the club's NASL era at IUPUI's Carroll Stadium. The home unbeaten streak, which began last July 7, includes a 9W-0L-4D ledger in 2019 at Lucas Oil Stadium, where the Boys in Blue have outscored the opposition 17-4 and shut out nine opponents in 13 games after tonight's clean sheet by goalkeeper Evan Newton, his eighth of the season and the club’s 11th overall.

The game’s first action came as a pair of early chances for New York Red Bulls II, both by way of forward Mathias Jorgensen. The first came in the fifth minute as a cross played in deflected off Jorgensen’s foot and forcing Newton into a close quarters save. The second came five minutes later when midfielder Vincent Bezecourt played a cheeky chip into the forward, but his one-time volley inside Indy’s box carried narrowly wide of Newton’s post.

Red Bulls II continued to apply pressure the bulk of the pressure until a 26th minute mistake by goalkeeper Evan Louro nearly led to the game’s opening a goal for the Eleven. A poor pass across his box was intercepted by Indy midfielder Tyler Pasher, who then faced Louro one-on-one. The New York ‘keeper nullified his mistake by coming up with a big kick save inside his six-yard box. Pasher nearly struck again in the 39th minute, when the pacey midfielder cut in on his preferred left foot after receiving the ball in the midfield. After easily dancing his way around three New York defenders, he unleashed a driven effort that floated just over the goal.

The last action of the first half would come just before the whistle after a Red Bulls II corner was cleared only as far as defender Janos Loebe, whose left footed, one-time strike from the top right of Newton’s box rattled off the crossbar, leaving the sides to enter the half level at nil-nil.

The first chance of the second half came in similar fashion to Pasher’s initial opportunity, a quick counter sprung by Indy midfielder Ayoze’s long ball in the 53rd minute freeing the Canadian for another one-on-one chance with Louro. Despite Pasher’s best effort to dribble past the goalkeeper, Louro stretched himself wide and got a paw to the ball, shutting the door on the goal scoring chance.

Red Bulls II forward Tom Barlow nearly broke the deadlock in the 72nd minute, when a ball played into the box connected with the young forward. Barlow attempted an acrobatic flick with the outside of his right foot from near point blank range, but quick reactions from Newton allowed the Indy ‘keeper to push the ball wide. Two minutes later, Newton made another big save denying Loebe on another attempt from distance, this time thwarting the ball on frame with a strong two-handed diving save.

Despite New York’s pressure and several quality chances, it would be the forward substitute Kelly who would break the deadlock in the 83rd minute. A long cross played in by fellow substitute Macauley King from the right flank would find the Jamaican at the back post. Kelly would climb and win the headed opportunity over two Red Bull center backs, sending the ball into the back of the net for his sixth goal of the 2019 USL Championship. The finish marked his second late-winner off the bench at Lucas Oil Stadium in the team’s last three home games, harkening back to the 81st minute tally that ultimately downed Saint Louis FC on August 18.

Like much of the nation, Indy Eleven is keeping an eye on conditions along the Atlantic Coast, with Hurricane Dorian’s presence threatening a potential date change for this Saturday’s scheduled away game against the Charleston Battery (7:30 p.m. kickoff, live on ESPN+).

Indiana’s Team will return to Lucas Oil Stadium with a pair of games next week, starting with Visit St. Pete/Clearwater Night next Wednesday, Sept. 11, against Ottawa Fury FC, followed by its annual Hispanic Heritage Night, presented by Financial Center First Credit Union, against Bethlehem Steel FC – which will be preceded by La Plaza’s annual Fiesta Celebration on Georgia Street throughout the afternoon. Kickoff for both contests is set for 7:00 p.m., and tickets remain available for as little as $15 at indyeleven.com/tickets or by calling 317-685-1100.