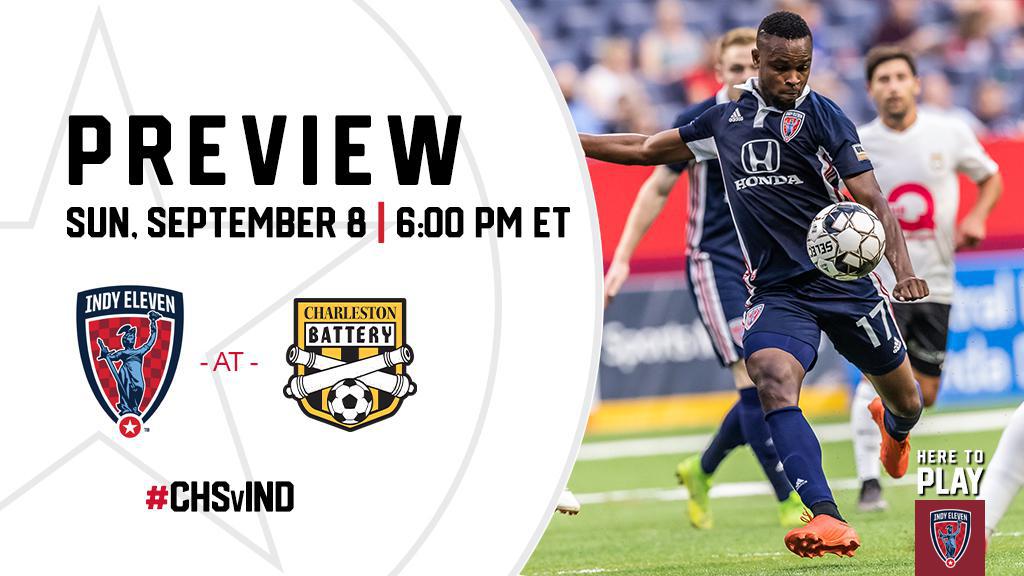 The Boys in Blue claimed three points in the first meeting with Charleston courtesy of midfielder Tyler Pasher’s late goal in the 84th minute. Goalkeeper Evan Newton’s fifth clean sheet of the season to that point also helped, a defensive performance that pushed Indy’s season-starting home shutout streak to 360 minutes.

Indy Eleven claimed a huge three points in a 1-0 victory over the current Eastern Conference leader. A late goal from forward Dane Kelly in the 83rd minute proved to be the difference maker, marking the Jamaican’s sixth of the season and 73rd in his historic USL Championship career. Newton also recorded his eighth clean sheet of the season as the Boys in Blue remained the side with the lowest goals conceded in the league (18).

Charleston claimed a point from their last match after a scoreless draw with Charlotte last weekend. The point is the first claimed in the last three matches for Charleston and fifth from their last five (1W-2L-2D). The clean sheet was Charleston’s fourth of the 2019 USL Championship season, but the first since May 11, snapping a 14-game streak in which the Battery had conceded at least once.

Wednesday night’s goal by Kelly marked the second time in the squad’s last four games in which the Jamaican striker registered a game-winner in the last 10 minutes. If you’ve seen the goals, you’ve also seen the emotions they’ve unleashed - both for Kelly and his teammates, who are overjoyed for a player who has been putting in the work all season but was snake-bit during a three-month goal drought.

With goals come confidence, and you can bet the USL Championship’s all-time goal king is chomping at the bit to regain his starting status. With a congested slate of games coming in the next month, he’ll indeed get those opportunities to shine once more, and he’ll be rested and ready to go as early as this weekend.

He didn’t score last match, but Charleston Forward Zeiko Lewis was able to test the goalkeeper one time and create two chances during the 78 minutes he played against Charlotte Independence on August 30. Lewis is currently Charleston’s leading goal scorer, netting six times in his 18 appearances for the South Carolina club.

The forward also acts as a creator for his side. In addition to leading the team in goals, the 25-year-old tops the Charleston charts for chances created with 27, three of which have turned into assist for the native of Bermuda. Keep an eye out for Lewis just behind the Charleston striker, as his natural and most creative position is when he’s able to play the number 10 role for the Battery.

Charleston Battery are tasked this weekend with trying to break down the toughest defense in the league. Manning the very back of the back third is Indy Eleven goalkeeper and 2018 USL Championship Golden Glove winner Evan Newton, who is virtually even with last year’s league-best pace of 0.80 goals per game. Technically he’s at 0.808 GAA this season, with just 16 concessions and eight of his USL Championship career-best 46 clean sheets.

Newton showed impressive reaction time in the last fixture against NYRBII, making a crucial save from a deflection just yards in front of him in the fifth minute of the match and a similar split-second shot against Tom Barlow in the second half. He went onto save 100% of the six shots he faced and nullified the two crosses that Red Bulls II played into the penalty area.

His counterpart comes in the form of Charleston goalkeeper Joe Kuzmisnky, who recorded his fourth clean sheet of the 2019 USL Championship in his last match against Charlotte Independence. Kuzminsky was forced into four saves against Charlotte, standing firm on his line and not allowing any errors leading to goals. That’s something he’ll aim to repeat this time around against Indy after making a critical error that led to a goal after Pasher’s shot from a difficult angle deflected off Kuzminsky for the game-winning goal in the first leg of 2019.

Indy Eleven (15W-4L-5D, 50 pts.) enters Sunday's showdown on a five-game undefeated streak and, pending results across the weekend, could pull even with New York Red Bulls II for the top spot in the Eastern Conference. Fans can catch all the action live via ESPN+.

Indiana’s Team will return to Lucas Oil Stadium with a pair of games next week, starting with Visit St. Pete/Clearwater Night next Wednesday, Sept. 11, against Ottawa Fury FC, followed by its annual Hispanic Heritage Night, presented by Financial Center First Credit Union, against Bethlehem Steel FC – which will be preceded by La Plaza’s annual Fiesta Celebration on Georgia Street throughout the afternoon. Kickoff for both contests is set for 7:00 p.m., and tickets remain available for as little as $15 at indyeleven.com/tickets or by calling 317-685-1100.