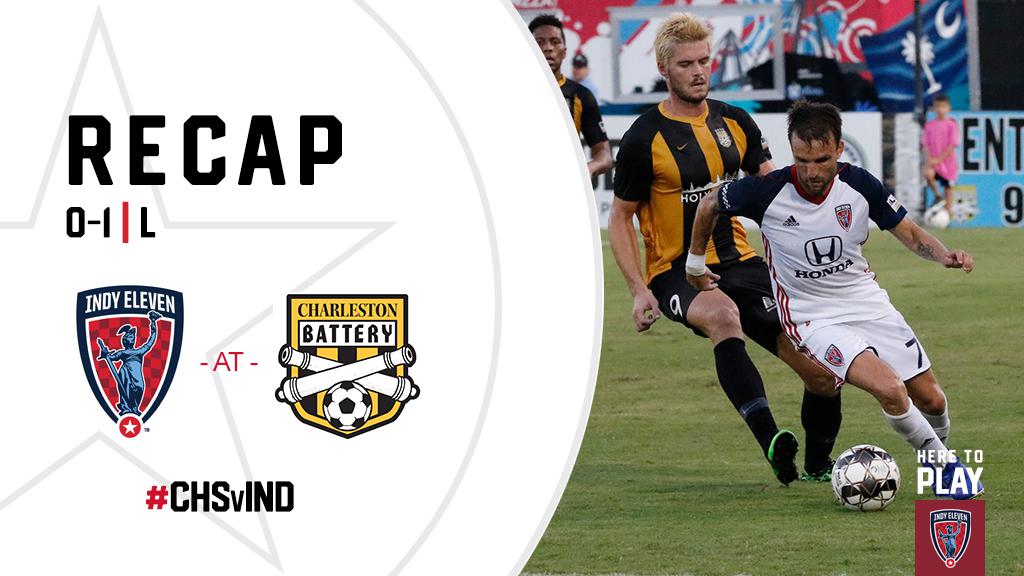 Indy Eleven saw its five-game undefeated streak snapped on the road tonight via a 1-0 defeat at the Charleston Battery. Despite holding distinct advantages in possession, (71%-29%), shots (17-8) and shots on goal (6-1) on the evening and playing with a man advantage for much of the second half, Indiana’s Team could not capitalize in attack, suffering just its second shutout loss in 25 outings this season.

Tonight’s match was delayed one day from its scheduled Saturday kickoff due to Hurricane Dorian’s pass through the Carolinas late in the week. The result kept Indy Eleven (15W-5L-5D, 50 pts.) in fourth place in the crowded Eastern Conference standings. However, the Boys in Blue still sit within a win of and hold at least two games in hand on all three teams in front of them – New York Red Bulls II (53 pts.), Tampa Bay Rowdies (52 pts.), and Nashville SC (51 pts.).

“It’s a disappointing loss for us. We dominated most of the game and we hardly gave up any chances and we ended up losing 1-nil,” said Indy Eleven Head Coach Martin Rennie. “The big thing is that we feel as though we should’ve taken more out of the game than that. We had quite a lot of chances and hardly gave any up. It’s not what you would expect from a game where you have that much of the ball and that much territory of the game.”

The Battery began the proceedings with a trio of set pieces in the opening 10 minutes, but none of those opportunities, nor forward Jarad van Schaik’s 20-yard blast from the run of play, were put on frame. Indy’s attack flipped a switch in the 15th minute, when forward Dane Kelly was put in alone by Macauley King’s through ball, only to see Battery goalkeeper Joe Kuzminsky come up with a 1-v-1 save. Kelly recovered the rebound and cycled a cross to the far post that was headed on by debutant midfielder Nico Perea, whose shot was also stopped by Kuzminsky at his right post.

Kelly was unfortunate to not take advantage of a miscue between Charleston defender Taylor Mueller and Kuzminsky in the 32nd minute, the two Battery backliners’ collision at the top of the area leaving the net wide open. However, Kelly took the chance early with another defender bearing down, the resulting shot dribbling just inches wide of the right post. Rather than sulk, the play seemed to spark the Jamaican striker, who ripped a more conventional shot from the same spot barely wide just two minutes later.

Indiana’s Team felt hard done to give up the lead in the last five minutes of the half. In the 41st minute, forward Eugene Starikov had a case for a penalty kick when Kuzminsky slid in and made contact on the Eleven striker as the two converged on Kenney Walker’s ball played into the area from midfield. However, the referee instead gave Indy a corner kick, a short play that broke down and turned into an 80-yard breakaway for Charleston midfielder Romario Piggott, who finished low and left past Eleven netminder Evan Newton. The Battery’s lone shot on goal of the match would indeed be enough to send the home side into the locker rooms up 1-0, although Eleven defender Ayoze’s free kick from 25 yards at the death of the half certainly put that into question after missing just wide.

It was another Ayoze ball, this time off a corner kick, that nearly led to an Indy equalizer three minutes into the second half, but defender Karl Ouimette’s crashing header inside the six was sent high. Straight after that play it was the Battery nearly scoring on the other end, but Eleven midfielder Tyler Gibson’s intervention at the right post was enough to keep Piggott from poking home for his second. In the 53rd minute it was Indy midfielder Matthew Watson making his presence known after entering late in the first half for an injured Walker, his 25-yard blast dragged just wide left, and a minute following it was another Ayoze service setting up Kelly, whose header, like Ouimette’s, was sent over the crossbar.

Ayoze made more things happen in the 57th minute, when the Spaniard entered a 50-50 challenge against the Battery’s Kyle Nelson that drew a second yellow card against the Charleston rookie midfielder for a high boot, giving the visitors a man advantage for the last half-hour plus change.

While Indy Eleven predictably began to boss the possession after the red card, the next truly dangerous chance would fall against to Piggott in the 70th minute, his shot from 20 yards out bouncing just wide of Newton’s left post. Starikov was twice frustrated by Kuzminsky on headers 90 seconds apart, first in the 76th minute when the Charleston ‘keeper tipped the Ukrainian’s attempt wide off the post, followed by an open shot from eight yards that went right to Kuzminsky on his line.

Repeated crosses into the danger zone by Indy Eleven would go wanting over the last quarter-hour plus six minutes of added time, the increasing frustration boiling over in the 94th minute when a scrum inside the six yard box on yet another service saw the teams trade shoves and a yellow card issued to substitute striker Gabriel. That would be the last gasp for the visitors, who were shutout for just the second time in their last 15 matches dating back to early June.

“We were pretty much on top anyways, but what the red card did was really made them sit back and bunker in. When a team does that, we’ve got to be a little quicker and creative in our play. That would be the one thing I think we need to take from tonight,” Rennie explained. “Also, making sure that when we’re being that dominant, that we’re decisive around the box, more creative in our movement and more confident in taking people on. When we do that, more chances will come.”

Indiana’s Team will return to Lucas Oil Stadium with a pair of games this week, starting with Visit St. Pete/Clearwater Night on Wednesday, Sept. 11, against Ottawa Fury FC, followed by its annual Hispanic Heritage Night, presented by Financial Center First Credit Union, against Bethlehem Steel FC – which will be preceded by La Plaza’s annual Fiesta Celebration on Georgia Street throughout the afternoon. Kickoff for both contests is set for 7:00 p.m., and tickets remain available for as little as $15 at indyeleven.com/tickets or by calling 317-685-1100.