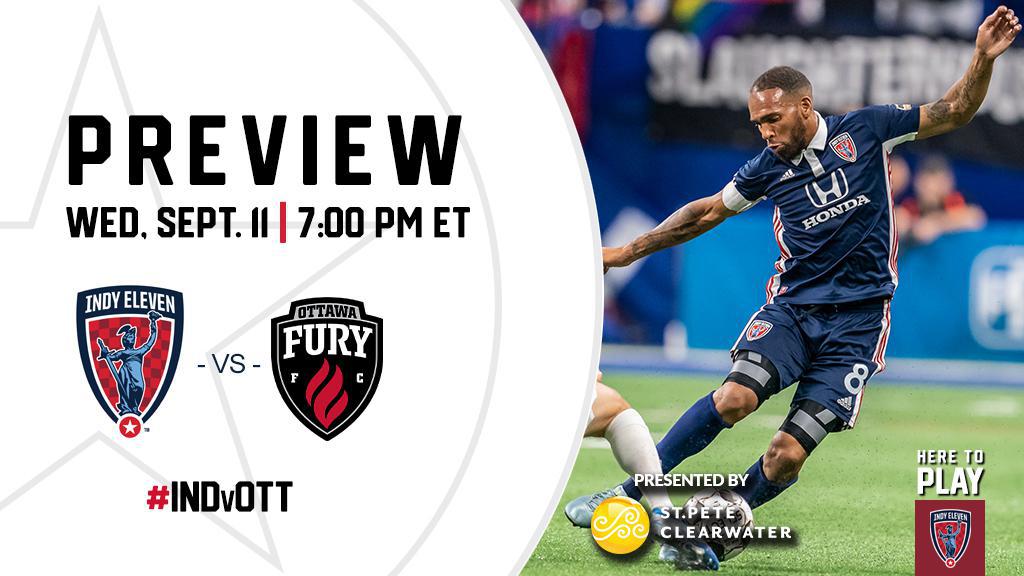 Indy Eleven fell to Charleston Battery on Sunday evening 0-1, the team’s first loss since July 27 on the road to Nashville SC. Battery midfielder Romario Piggott notched the only goal of the match in the 42nd minute off a strong counter attack with a low shot just out of Indy ‘keeper Evan Newton’s diving reach. The fixture is also the first time the Boys in Blue have been shut out since losing to Nashville, having scored at least once in each of the last five matches. Despite finishing the game with 71% possession and 17 shots, the Boys in Blue couldn’t muster the equalizer.

Ottawa Fury FC’s third loss in a row came at the feet of Atlanta United FC 2 in the Peach State last Saturday. ATL forwards Andrew Carleton and Patrick Okonkwo gained the high ground with strikes in the 17th second and 26th minute, respectively. Ottawa nullified the host’s lead with a penalty from Wal Fall in the 39th minute and closed the gap in the 70th minute with a goal from Hadji Barry, only to concede the game-winner to ATL’s Carleton two minutes later. The trio of goals allowed brings Fury FC concession count to eight goals in its last three matches, converting just two through the winless streak.

When facing a tough stretch of games in a short span, it always helps to have an experienced veteran who can positively impact his teammates both on and off the field. For Indiana’s Team, that veteran is captain and midfielder Matt Watson. The 34-year-old has made 23 appearances, six of which have been starts, in 25 games for the Boys in Blue.

With age comes experience, as Watson has played 387 games in his 13-year professional career. After starting the majority of games in his first season with Indy Eleven, the captain now plays a super sub role with the ability to play almost any position in Head Coach Martin Rennie’s system. The Englishman lurked in the center of the pitch for the majority of 2018, but has added play along the outside of Indy’s midfield and backline to his repertoire this season. Despite the rotation, Watson remains effective in all roles, having completed 80% of his passes, won 70% of his tackles and has contributed a goal through the 2019 campaign (so far).

Watson might not be the only veteran present on Wednesday night. Ottawa Fury FC forward Carl Haworth will most likely feature in the Canadian Club’s starting XI come kickoff. Haworth, now in his 10th year of professional play, is no stranger to facing the Boys in Blue, something he’s been doing since both team’s inaugural NASL seasons in 2014. The 30-year-old has racked up 153 appearances for Ottawa and scored 24 goals.

Eight of those 24 career goals have come in the 2019 USL Championship season, a statistic that lands Haworth as the team’s joint leading goal scorer. Much like Indy’s Watson, the forward has the ability to play multiple roles when called upon, showing his versatility on the pitch. Pending Ottawa’s game plan, Haworth may field as a forward in an attempt to break down a seemingly impenetrable Indy home defense or as an outside back in an effort to contain Boys in Blue midfielder Tyler Pasher.

Match-up to Mark | Indy Wing Play vs. Ottawa Back Third

Playing on the road doesn’t appear to favor Ottawa Fury FC. The side holds a 3W-5L-5D record on the road, a distant cry from its 7W-2L-4D home record. Moreover, the Fury is currently on a three-game losing streak, with the last two defeats coming away from home and the team continuing its away stint in Indianapolis this Wednesday evening.

The last loss came against Atlanta United FC 2 in a match where attacks down the flanks plagued the Canadian side and all three goals allowed came from wing play. The first acted as a quick breakaway down the left flank in the 17th second, the fastest goal scored in ATL UTD 2 history. The second goal came from an early cross into the six-yard box off the right flank in the 26th minute to trail 2-0. Lastly, the final concession came in as a cross from the right flank that caught Ottawa goalkeeper Callum Irving off his line and edged Atlanta into the lead once more to secure three points.

Indy has thrived on wing play in 2019. With a pair of arguably the league’s best wingers in Tyler Pasher and Ayoze, the Ottawa back third will need to be aware of their positioning and ready for balls played into the box. In the last two home matches against New York Red Bulls II and Charlotte Independence, the Boys in Blue played in a total of 26 crosses. Forward Dane Kelly’s header that toppled first-place NYRBII last Wednesday was the result of a ball played in early from the flank. Not only will Ottawa need to be prepared for crosses, but also pacey runs from the flanks into the box by Pasher and shots from distance courtesy of Ayoze.

Indiana’s Team will return to Lucas Oil Stadium for its first of two matches this week, starting with Visit St. Pete/Clearwater Night on Wednesday, Sept. 11, against Ottawa Fury FC, followed by its annual Hispanic Heritage Night, presented by Financial Center First Credit Union, against Bethlehem Steel FC – which will be preceded by La Plaza’s annual Fiesta Celebration on Georgia Street throughout the afternoon. Kickoff for both contests is set for 7:00 p.m., and tickets remain available for as little as $15 at indyeleven.com/tickets or by calling 317-685-1100.